My very talented soon-to-be brother-in-law, Brady, visited us last month. Skylar's sisters and their children came as well. For a full week, somewhere around 84 people were staying in my house. The fact that we didn't all contract meningitis was a true Pioneer Day miracle.

Brady is a photographer, and since he heard that Utah didn't have any of those, he decided to bring his camera on the trip so he could find out in person how completely unphotogenic I am.

I'm not kidding about this. It's a true curse. I should be compensated for it somehow. They should let me board planes first and skip the line at Disneyland.

It doesn't matter how I'm looking or how well-rested I am or how many times I've had the stomach flu in the last month, the moment a camera gets pointed at me I transform into Sloth from The Goonies.

Basically I'm trying to tell all of you who have never seen me in real life that I'm incredibly hot. You would totally faint if you saw me. Srsly.

Skylar doesn't understand my problem. You could snap a picture of him from a moving vehicle just after he passed out in a pool of his own vomit and it will somehow look like he's getting ready to walk the red carpet at the Oscars.


I don't understand it. It actually makes me angry. It makes me angry because it's not fair. I feel like he should have to pay more in taxes and let people cut in front of him in line at Disneyland because of it.

And if you think I'm just being crazy, I'm really not. I've had many other people in my life acknowledge my curse. When I used to be on Tinder MayItRestInPeace, I regularly had Tinder dates tell me I should pick better pictures of myself because they were surprised when I showed up not looking like Sloth. I would always be like "OMG THANKS FOR THE ADVICE I SPENT LIKE NO TIME ON MY PROFILE" but in my head I would be like "BITCH I SPENT A MONTH TRYING TO TAKE A GOOD PICTURE OF MYSELF AND THOSE ARE THE FIVE BEST PHOTOS IN EXISTENCE."

The point is, Brady had a very serious uphill battle to climb when he took me and Skylar to the top of some hill to snap some engagement photos for us.

The experience was stressful for me, mostly because about five seconds before we started, Duncan got loose and chased a motorcycle all the way down a very busy street. I set world records sprinting after him in my socks because I wasn't wearing shoes for some reason. Judge not lest ye be judged, Doodle 5:15.

Well, somewhere in the middle of my sprint I fully stepped into that quicksand from Princess Bride, except is was like a much muddier version of that quicksand and my leg went into the ground nearly up to my knee.

By the time I caught Duncan, who was quite proud of himself by the way, I was soaked in sweat, covered in dirt, and, well, I looked like Sloth from The Goonies even without a camera pointed at me.

Brady was exceptional and wonderful and we are so grateful to him because he somehow managed to take some photos of us where it doesn't look like a male model is marrying for money.

He has sent us a few so far, with some more to come. But, here's a preview.

Also, note, the main reason I chose to be gay was so one day I could switch clothes with my fiance in the middle of an engagement photo shoot.

This time in Strangerville, a conversation about how to deal with depressing news. Also, a man takes the Strangerville Live stage to talk about a night his small Utah town will never forget. Story: A Night of Rage, by Clint Betts Production by Eli 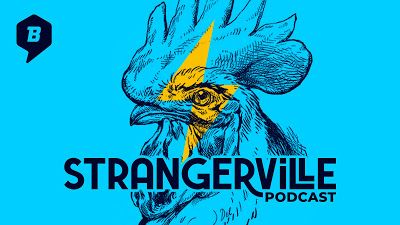 After a couple of weeks off, we are back with more Strangerville. And in happy news, the Strangerville Podcast is now a part of The Beehive [http://thebeehive.com/]. Pretty