One thing they don't tell you when you choose to be gay is that family planning is going to be complicated.

No one told me that. When they sat me down to unveil the gay agenda, Judy and Liza basically only focused on outfits and sass. Not a single warning about how frustrating it would be to visit so many houses without permission to completely remodel them.

And not a word about how hard it would be to not have children.

I wouldn't want, for a second, to pretend I understand anyone's experience in this area besides my own. If you're going through this heartache, I'm sorry. I love you. And, actually, I take it back. I do sort of understand.

My gut punch didn't happen in a single moment in a doctor's office, or over months of testing, or after repeatedly buying something to pee on in a pharmacy.

As the teacher spoke, I remember thinking, "what if I never get married?"

This wasn't about independence or new-aged views on marriage. This was about a fundamental confusion about why any boy would want to get married to a girl and try to have children in the first place.

That confusion only got more confusing as I grew older.

"Maybe everyone feels this way when they're young," I thought. "Maybe when I'm a grownup I'll understand and I'll want to get married. Then I'll get to have kids."

I really wanted to have kids.

But I got older and I still didn't want to get married. No matter how much I dated, no matter how hard I tried, every time I even contemplated this as a possibility, I was filled with so much terror I could have died from it.

I was sitting in the apartment of a perfect young woman who lived in my complex in 2007 when she told me she had feelings for me. It took everything I had in me not to burst into tears. "I . . . can't," I remember telling her without any further explanation. She smiled a forced smile--an encouraging smile--and nodded supportively. A single tear rolled down her cheek. "That's ok," she said in a voice higher than usual. Then multiple tears rolled down her cheek. I walked home and screamed into a pillow. I woke up the next morning with a headache. And then I started this blog.

It was around that time that I took the next step. "It's unlikely that I'll ever be able to have children." I wrote that in my journal. Every letter I wrote in that sentence felt like I was getting stabbed. But it seemed like I needed to write it. I couldn't say it. Not to anyone. But I thought I should write it.

I didn't even explain why, in my journal, I thought becoming a dad seemed unlikely. I was too afraid to go that far. Too scared to admit much more. All I knew at the time was that I needed to take a step back from this nearly-intuitive dream. This dream I had had since the beginning, whenever that was. I needed to not need this, because it really might not happen. And what would happen to me if the thing I needed to happen didn't happen?

I would never be a dad.

I cried myself to sleep.

And I cried myself to sleep.

And then I met Skylar. I won the lottery in meeting Skylar. Everyone should get their own Skylar.

He almost immediately made everything feel better. He was so cheerfully confident--so blissfully passionate--so wonderfully obstinate, at least when it came to this topic.

"It would be so hard to have kids," I remember informing him, like I was letting him in on a secret I had earned with agony over the decades. "Even if we got married and tried to jump through the hoops, it would all be so hard. We're not like normal people."

Skylar pursed his lips. He looked at me in concerned determination. "Honey, this is a deal-breaker," he told me. "I'm going to be a dad. So you better figure out really soon whether you plan to be, too."

There must be a word for it. For the feeling when you discover an old dream you gave up on is possible again, but it still might not happen.

They still feel like a fiery arrow sometimes. Pictures of people at a water park with their kids. Pictures of my peers in matching outfits with sloppy toddlers. Pictures of dads proudly clutching their teenagers at a high school graduation.

Happy for them, but sad for me. Ashamed that I'm sad for me. Except, now, also, hopeful and devastating in a way they never were before.

Being a grownup is more complicated than I was warned. Judy and Liza were probably supposed to get to that.

It's hard to explain. I don't think I can explain all of the feelings.

I can only say that today I'm not a dad. Skylar isn't either. I hope that will change, but I don't know that it will. And last night I woke up crying. 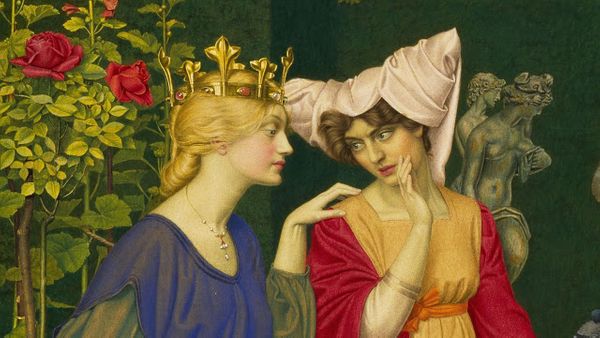 This time in Strangerville, Eli agonizes over how to come out to the dentist, Meg steals from a movie theater, and a nostalgic walk through some complicated religious memories. Story “Space Jesus” by Eli McCann (music by Benny Martin Piano) http://traffic.libsyn.com/