Ok nobody panic but I changed some stuff. I know. I know. We're not supposed to change things. Change is not a thing we handle. There's a reason we're all still here hanging out on blogger in 2020.

But we're all still living in 2006 over here. The only thing that could make this site more 2006 is if I inserted one of those widgets that automatically blasts a Jack Johnson song every time you visit Stranger. Don't worry. I'm not going to do that. Because lazy.

I changed things because our super talented artist at The Beehive, Josh Fowlke, messaged me and was like "you do realize you have like 19 different and conflicting brandings you're using across all of your various projects, right?"

Then he sent me some new images and fonts and I had to go in and do stuff with internet code and dark magic and I think I may have accidentally launched bombs at Thailand at one point but eventually everything ended up looking how it looks now. Which is good. I think. Probably.

I'm so very tired right now. Skylar woke up at negative 3:00 AM screaming. Then he flew out of bed and started running through the house in a full panic. Duncan and I were going to follow him to see what was going on but we didn't because lazy and tired. Eventually he came back into the bedroom, climbed into bed, and whispered "the house is secure."

I still haven't gotten any explanation from him about any of this, but I did lie in bed most of the rest of the night with my eyes wide open trying to figure out if we were more vulnerable to an attack than I've been assuming.

I got off topic. The point is, Josh designed the above image and he's really really good at what he does. This week I wrote a story about learning to play the recorder in the fourth grade (bonus, there's vomit) and if you haven't read it yet, you should, but also, you should look at the image Josh designed for it. It is simultaneously freaking me out and making me want to get a nose job.

This time in Strangerville, we discuss Four Seasons Total Landscaping and our attempts to disconnect from the news of the day for our own survival. Plus, a story from Eli about playing the recorder in fourth grade. Story: The Beehive State, by Eli McCann 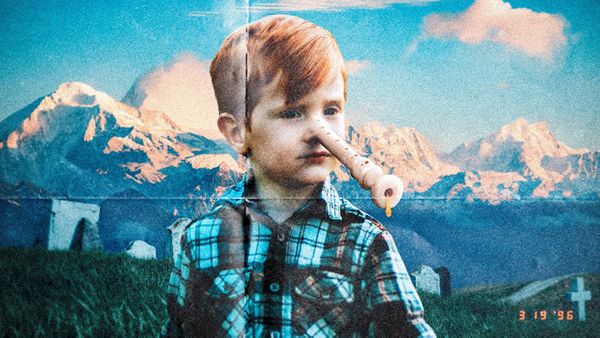 This piece was originally published by The Beehive. I sat on the grass near Brigham Young’s grave as a bologna sandwich that had been prepared by a handful of