We were standing on the side of a street, waiting to cross it, when Skylar was robbed. The culprit was a man in grey sweatpants speeding through a busy thousand-year-old intersection on a bike.

I saw him out of the corner of my eye and thought he was coming a bit close. My quick step backward was implicit, as was my reach for Sky's arm, which reach turned out to be in vain.

Skylar grabbed his face as the man sped on, a quick glimpse backward in our direction. My husband uttered a profanity or two—the worst ones, if you ask some.

"Did he get your glasses?" I asked.

The thief had grabbed them from Skylar's face in a busy part of town in Dublin. It was like stealing candy from a baby, I guess.

"I would be more upset if I wasn't so impressed with the skill," Skylar told me a minute or two later. "I guess he needed them more than I did."

He seems to be engaging with everyone we come across, my husband. Usually it's less adversarial than a robbery.

"Wanna walk around with us for the rest of the day?" he asked a retiree named Diedre whom he had roped into giving us the entire history of Ireland in an ancient church on Tuesday. She blushed and responded with a light silent slap on his arm, the international signal for "oh stop, you."

He charmed a taxi driver the next morning. "You are such a good driver!" he told this man who drives for a living. The driver beamed and then gave Skylar a handful of driving advice for our next two weeks navigating the Irish countryside. "Just remember to keep left," he reminded us as he pulled up to our car rental spot.

Not 24-hours later we stood atop a tower built in 1000 AD with a pair of women from British Columbia.

"My goal is to move to British Columbia and be a doctor there some day," he informed them after a long chat. "I need to meet some doctors up there and start making friends."

"Oh, I doubt you'll have any trouble making friends," one of the woman told him.

"That's what I always say," I interjected.

They both looked at me as if I had just arrived and they didn't know who I was.

This morning we drove to the middle of nowhere to visit a yarn store. "We can't not go to this yarn store," Skylar told me. "It's one of the only wool mills in Ireland. You can buy authentic yarn to knit me another sweater!"

We wound around tight streets, me sweating, Skylar enjoying the scenery and constantly reminding me to keep left, until we pulled up to what appeared to be an abandoned property on an abandoned street.

We wandered inside to find a charming little shop with yarn, blankets, and sweaters. Suddenly I heard a bell ring. I turned around to find out it was Skylar who had rung it, the bell sitting on the empty counter at checkout.

"Why did you ring that?" I asked him.

"There's a sign that says 'ring the bell,'" he informed me, befuddled.

Before he could respond, a very Irish man came out from a back room to ask if he could help us.

"No." Skylar responded with a smile.

"Oh. You rang the bell, though," the man let him know.

"Well, the sign told me to. I guess I didn't think about it," Skylar half apologized.

Two hours later I found myself in the cellar of a very old shop receiving a full tour of one of Ireland's only wool mills, which still uses machines from the 19th century—machines that have been in active consistent use since then. The lecture was for Skylar, or at least it seemed the man thought so as that's the only person he made eye contact with for the better part of an afternoon. At the end he handed Skylar his card with all of his contact information. "Do keep in touch," he said as he packed up so much merchandise for my husband who was "just trying to support local" that neither of our dogs can ever go to college now.

He's living in a different reality than you and me. 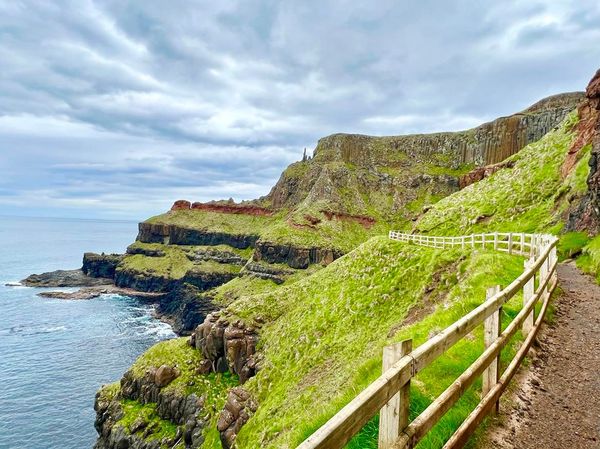 We returned from two weeks in Ireland and Northern Ireland last night. It was lovely. We ate potatoes for every meal. Skylar now thinks we are going to name our

This time in Strangerville, Eli's puppy remains a terrorist, Meg went to a political debate, and a woman has a problem at a pizza restaurant. Story Bathroom Door, by Lisa Turley Smith Production by Eli McCann & Meg Walter Join our Patreon!