Skylar woke up this morning at negative one thousand o'clock so he could wander the house complaining that he's "already bored."

I married a man who has apparently lost the ability to relax. AND THAT'S MY THING!

He used to be good at it. "Just give me a good book and cozy fire," he lied to me on our first date. "I could sit in silence and read for hours."

That seemed calming to me—to be with someone who is at peace. I knew that life could never be for me, personally. "But maybe I'll get a contact high from him," I thought.

Skylar moved in in 2016 and I don't know that I've actually seen him relax ever since. He was working long hours and mostly out of town at that time. Then he was trying to get into medical school, which as it turns out is exactly as difficult and rigorous as qualifying for the U.S. Olympic team. He even got the abs to prove it. And then he's been in medical school hell for the past three years.

The third year of medical school was unlike anything I've ever seen. Law school was stressful. I lived at the law building on BYU's campus. It was competitive. It felt unrelenting at times. And I just sort of thought medical school would be like that.

Skylar's third year was somehow worse than law school was for me. Graveyard shifts. Constant studying. I mean, truly constant. There has not been one minute in the last 12 months where the two of us have been in a car together without him going through flashcards or reading some medical book. He studies while he works out. He studies while we eat meals. It's never ending.

It all paid off. He got the best possible grades he could have received and accomplished a lot of other things along the way. The physicians and staff he worked with all year loved him, of course. I've met many of them. They gush over how wonderful he is. I beam with pride. I think this must be what parent-teacher conferences are like. Well, for people other than my parents who heard on a biannual basis from 1990 to 2002 "Eli daydreams a lot and for his most recent assignment he submitted an essay about a time he got food poisoning from corndogs, which was odd, since this is a math class."

Skylar announced to me a few months ago that he would have nearly the entire month of June off. His first real break in over a year. We planned a trip for as much time off as I could afford to be away from work and my Duncan Punkin Doodle Noodle.

And when we got back a week ago, I thought now would be a great time for Skylar to finally plant himself next to a proverbial fire with a literal book, just like his romanticized version once fantasized.

Then he woke up at negative one thousand o'clock this morning and complained he was bored.

"Why don't you call your friends and see if they can play today?" I suggested.

"They're all busy and there's nothing to do," he whined. "Could you set up a play date for me with someone?"

I swear to Oprah I spent the next ten minutes trying to figure out a playdate for my grown ass husband, which was impossible to do on a workday. As I was leaving the house I heard him calling my parents to see if they wanted to have "craft time" with him.

Should I be looking into a nanny service? I need a Mary Poppins.

This time in Strangerville, we kind of believe in horoscopes, Meg flashed a bunch of strangers, and Rebbie tells the story of comparing herself to other millennials who all seemed to be buying homes and succeeding in their adulthood. Story Did You Floss? by 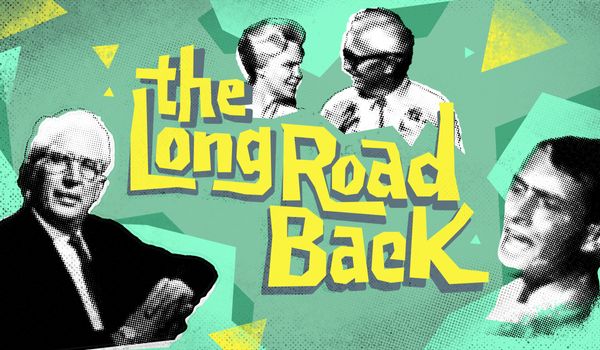 By reader request (I don’t remember who. Sorry.), I’ve decided to take a deep dive into a 1965 Mormon film called “The Long Road Back.” We begin with