One of the joys of living in a house built by Christmas elves in the fourth century AD, is no standard furniture will fit anywhere. Nowhere is this more annoying than in our bedroom. The ceilings are two feet above the floor, which is sloped toward the back wall like a slide in a McDonald's Playplace.

Last year we decided to upgrade to a king-sized bed, and the only explanation I can give for how we were able to fit it into the bedroom is our house has the same characteristics as a Mary Poppins handbag.

Unfortunately, the bed upgrade meant that we simply could not have side tables, like responsible adults who read self-help books before kissing on the lips one time and turning off their lamps in unison to go to bed at 9:00 PM. There was no room for such luxuries. My side of the bed is four inches away from the wall. A mound of smutty novels I'll never finish dwell down on the floor in a dark and dusty pile, strewn with phone charging cords and a retainer I dropped down there decades ago when I convinced myself I was absolutely going to start wearing it again during an ambitious new year's resolution planning session.

Sky's side of the bed is more dignified than mine, but only slightly, and only because he feels pressure to make it presentable since his side is the one closest to the door, visible in a way mine is not. He found some contraption on QVC or SkyMall or at an airport kiosk. It's a small shelf that clips to the bedframe and provides him six inches of storage bliss. It isn't pretty, but at least his smutty novels are elevated from the floor.

We thought it would be responsible to put a lamp on this shelf. A small glass lamp made of glass surrounded by glass and topped with glass. The glassiest and most fragile lamp you could ever find. Why did we think this was a good thing to place on a precarious SkyMall clip shelf? I do not know, for we are not smart men.

What I do know is that someone has apparently taught Skylar the f-word, because that's exactly what he screamed at three o' clock in morning, when it is illegal to be awake, just last week.

Skylar sleeps with an ungodly number of pillows. I don't know where all of these pillows came from. I swear I've never bought a pillow in my life. But when he moved in with me in Year Of Our Lord Cher two thousand and sixteen, suddenly my home became filled with pillows. They just started sprouting like bacterial spores in a gym steam room. Today there are so many pillows in my house that you can see them from space.

Well, Skylar what's-his-name at three o' clock in the morning had rolled over like a Victorian princess touched with yellow fever, and in-so-doing, he knocked thirty or so of his pillows in the direction of the glassiest glass lamp that ever we did own. And that lamp crashed to the floor and shattered into so many pieces that if you put them into a straight line they would wrap around the world twice.

Skylar arose and gathered every garbage can and vacuum cleaner in the western hemisphere, while Duncan and I stayed in bed and pretended to be asleep (Louie was at boarding school and so he missed the adventure).

There was sweeping. There was vacuuming. There were sighs that were most definitely directed at me.

Eventually Skylar finished cleaning up ground zero, and he climbed back into bed in a huff.

An hour later I was again awoken by the sounds of a dog mid-vomit.

My motherly instincts took over and I shot up in bed and into a sitting position, just in time to cup my hands under Duncan's quivering chin to catch so much stomach bile that my home is now technically a crime scene.

The smell hit me just as I was running into the bathroom, Duncan trailing behind me, vomiting onto the rug and every surface in his wake. I gagged, and threw up myself, for good measure, and then spent the next hour or so scrubbing our dirtied home while the man I married—the same one who swore in front of all our family and friends and cherubim of heaven and hell to support, sustain, and worship me at all times—stayed in bed and pretended to be asleep.

Revenge is a dish best served through vicarious vomit. 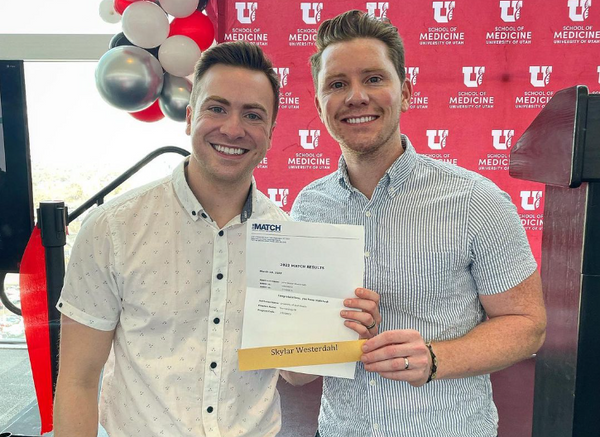 I'll never forget watching the news one evening in February of this year. They were broadcasting from a dark Kyiv, just getting ready to wake up for the day as

This time in Strangerville, Eli lives at Urgent Care now, Meg is collecting stories about Hallmark movies, and we revisit a story about Eli's Christmas in Palau. Story Excuse My Christmas (Replay), by Eli McCann (music by Jan Terri) Production by Eli McCann & Meg