Well we’re finally back from California and I must say, it feels great to be home. The trip was fantastic and I’m now trying to find a way to write all about it and I think the most logical way is going to be to split it up by day. So here it goes:

After attending church in Logan to hear my cousin speak before he leaves for his mission in Mongolia, we start the two car caravan to southern California. I was in my parents’ car with Krishelle and my two nieces Kamree and Kaylee. I was a little nervous about riding halfway across the country with the two girls but I thought they would probably just sleep most of the way. For the next 5 hours they sang every primary song they’ve ever heard at the top of their lungs. The fourth picture is JJ's car seat after about 4 hours in the car. We think that's mostly uneaten granola and cookies. Also, about every three and a half minutes the following conversation took place:

We finally arrived to our hotel, just 30 minutes west of Las Vegas and got ready for bed. About this time Dad decided to get a really terrible pain in his stomach. We gave him a blessing and I offered my Lortab which I’ve faithfully carried around with me everywhere I've gone for the last 2 weeks. He didn’t take it and it would have been a waste of a pill anyway as five minutes later he violently threw up everything he’s eaten in the last 20 years including some Spam that he taste-tested at a grocery store in 1973 and that entire glass of Goats milk that grandpa made him drink in 1958 in order to “cure” him of is distaste for dairy. Meanwhile I was finding out on the phone that the nearest medical center was in Henderson, 33 miles away. Finally we got dad in the car and mom drove while I read the directions off of Jeff’s GPS system and dad sat in the back ironically taking on the role of Kaylee, asking if we were almost there about every three and a half minutes because the pain was unbearable and the paper bag he was using to throw up in was getting rather full. We finally arrived at the ER after I made a couple of frantic phone calls to the hospital for simple directions when the GPS system tragically led us astray. When we got there dad was barely conscious and looked worse than I’ve ever seen him. They got him in right away and mom went back with him at about midnight while I stayed out in the freezing cold waiting room until about six AM. After doing many frantic tests they discovered that the problem was his Gall Bladder (which dad knew from the very beginning). Needless to say, it was very scary and the three of us were very very tired the next day.

After loading up the cars, we leave for Anaheim around lunch time. Monday was pretty uneventful. We made it to California without too many problems. About halfway there I heard Kaylee say “Kamree, will you let me rest my head on your legs. It won’t hurt . . . well I’ll try not to hurt you.” At one point 3 year old Kamree did tell us “My mom said that I could pick my nose and wipe my buggers all over Disneyland and LEAVE ‘em there!” Krisanda denies this claim.

The first day of Disneyland was a complete success. After taking a good 45 minutes to walk the two blocks to get there (this family moves slowly when together and on foot) we decided it would be a good idea to take Kaylee and Kamree on the Matterhorn, forgetting that it is a rather quick, jerky, terrifying ride full of monsters that jump out and scream at you at every turn. Kamree sat with me, excited at the beginning as I had told her we were going up the mountain to see a snowman. By the end she was laying flat down with both arms and legs stretched out and the most traumatic look of horror I ever seen on anyone, whimpering over and over “I want mommy. I want mommy.” Kaylee did just about as well. A few minutes after that, Kamree pointed at the tea cups and said bluntly “that ride I like!” then pointing at the Matterhorn “That ride makes me scary.” By the way, she didn’t stop saying in the most whimper-driven voice I’ve ever heard “I scary of the mountain monsters” for the rest of the trip.

Also, Micalyne and I quickly became obsessed with every ride that took pictures and we tried desperately to make the ugliest faces we could conjure on each one; the second picture is a result of that.

and were quite surprised when Mr. Toad dies and goes to Hell (for reasons which are still a bit foggy to me) and we were driven into an uncomfortably hot room where boiling water was splashed on us as the ambiance of Satan gaped over us and hackled in our terrified faces. After Kamree pointed at the Matterhorn another 30 times and, with tears in eyes told us about the scary mountain monster that lives there (I feel like I should be taken in for child abuse) we left Disneyland on Thursday afternoon. Disneyland was a great experience and the kids absolutely loved the rides, the characters and the parades (although Kaylee did mention during the parade on the second day as though she had been cheated, “this is just the same one as yesterday!”). On Thursday afternoon we went out to Huntington beach for a couple of hours. I tried to just lay out and relax but JJ kept throwing handfuls of sand on my face so I finally went out into the ocean with Andy, Micalyne and Jeff until we were all sucked out halfway to Japan and almost killed in a tidal wave. We drove down to Brawley that evening and arrived at grandma’s house pretty late. Brawley is a small town in Southern California, very close to the border of Mexico. My mom grew up there and my grandparents still live there along with a few other family members.

We went and saw grandpa at his shop (it was about 108 degrees by that time and most of us were going through shock by lunch). The rest of the day we hung out with family and desperately tried not to die in the heat. Also, we found the third picture in the post at my grandma's house; that's Krisanda as a child and for reasons that I won't detail in this blog, this picture was quite the find. Right Krisanda?

We got up early and tried to clean up so as to not leave grandma’s house in too bad of condition (thanks grandma for letting us stay with you!!!). We hit the road early and only stopped about 64 times on the way home so Andy could eat at every Mo’s Burgers between Brawley and Salt Lake including one VERY questionable Denny’s out in Needles. They cracked two nasty looking raw eggs onto my plate and that was enough for me. I didn’t even need to wait until five minutes later when I discovered a jet black hair on my plate to convince me not to eat. And we all felt sick the rest of the way home. The kids accounted for about half of the stops on the way home saying they needed to go potty but most of those stops just ended up being a ploy for them to try to change cars.

And now we're home and recuperating from the mass exodus. It really was a great time and I'm glad I was able to spend some quality time with the fam.

Well I'm finally back in town and while vacation is always a splendid thing, I must say it feels great to be back. This is partly because I've been sicker than I've ever been for the last two days, which I'll get to later, 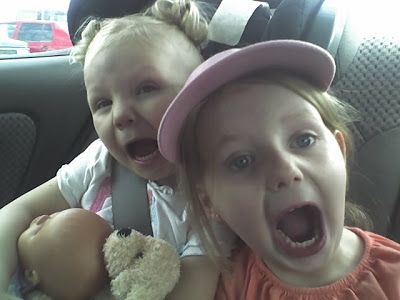