We woke up in Egypt. That wasn't of course until after we had a big run-in with the hotel who had a problem with us showing up in the middle of the night even though Uncle Will had emailed the manager weeks before and made those specific reservations. So we slept for a couple of hours and woke up to the call to prayer and a nice up close view of the pyramids from our window. And the pyramids were our first stop.

My whole life I had wanted to see the pyramids and go inside them and I was so excited to finally get to do so. Plus we had been making jokes non-stop about what soul-searching questions we were going to ask the sphinx when we saw it. We also got pretty good at imitating the sphinx's voice which was sort of a raspy whisper that kept saying "it's hot and I'm bored!" everytime we quoted it. Well we got hooked up with a taxi driver named Sayed who told us he only spoke English "50/50" right before Uncle Will told him we only spoke Arabic "0/100." After a few minutes with Sayed, however, we discovered that his self-assessment of "50/50" was extreemely generous. Sayed was great and very very helpful (we spent just about the whole day with him and tipped him heavily because he was hardly charging us anything to take us all over the place and sit and wait while we took a million pictures in the hot hot sun. He turned out to be one of only two or maybe three Egyptians we met that didn't lie to us or try desperately to rip us off).

The pyramids were great other than the 300 men with camels that followed and pestered us the entire way to ride their animals and buy their stuff "for free" which is just one example of the lies. But the pyramids were actually a lot bigger than I ever pictured them. I was also surprised that they were so open. You could go climb on them, spit on them, throw trash on them--really do whatever you want--which sort of seemed innapropriate for the last standing origional wonder of the world but hey, we got to touch the pyramids! There were a few different places where you could actually go inside the pyramids; they were narrow small shafts that you had to go into single file and they went forever into the darkness. Sayed showed us one of the shafts but told us it goes on forever and it's like an oven in there so he took us to a shorter one and told us that in this one you get the same effect with a fraction of the effort. I was extatic about going inside and was the first to climb in. Made it about 20 feet down the very narrow steep shoot (you had to go in backwards and climb down like a ladder) when Uncle Will made a joke about someone locking us in there. I looked down and saw how far down the shoot went into the ground under the GIGANTIC pyramid (and at the bottom it just turned and went down another shaft, and then another), then I looked up and saw the tiny hole at the top seem so far away; ok, I sort of freaked out and yelled "I gotta get out of here!!!" and before anyone could talk me out of it, I climbed over grandma, uncle Will and Krishelle and shot out of the top like a cannon, heart racing. After getting made fun of for a few seconds, the rest continued their decsent, grandma saying in her sweet voice that she didn't come all the way to Cairo to not go down. Krishelle made it about half-way down and then got freaked out and just waited for Uncle Will and Grandma to get all the way to the bottom of the final shoot and play around in some empty room down there before climbing all the way back up. I'm still freaked out about the whole thing and I'm getting hives just thinking about it. The first picture is grandma at the shoot entrance.

We finally did get on camels, which was neat. This was right before the camel guy tried to charge us an arm and a leg for it, saying over and over "money she comes money she goes" which ended up being a nice theme for the rest of the trip (emphasis on the "money she goes" part). We gave him a fraction of what he wanted (which was probably still way too much) and went off to see the sphinx. I sat down and had a nice conversation with it. Asked it what its favorite color is to which the Sphinx responded "dirty brown." I told it that that was quite convenient as everything around it was dirty brown. The Sphinx, unlike the pyramids, was much smaller than I pictured it and had black pigeons all over its face. I tried to convince Krishelle to cut her nose off and tattoo black pigeons on her face and then come home and tell everyone "it's the latest style from Egypt! It's called the Sphinx!" But she never would agree to do it. Nonetheless, the sphinx was really neat and it was actually gated off so we couldn't get up to it.

After lunch we made a terrifying journey through Cairo trafic (no rules). If you can imagine 22 million cars all honking and cutting each other off at the same time at record speeds, with no lanes at all, you can imagine Cairo traffic. If I was Catholic, I would have been crossing myself a lot the whole time.

Our last stop of the day was the Egyptian museam which is full of the stuff they found at the pyramids. We aren't museum people so we told Sayed we would only be in there for about 20 minutes. He got really offended and told us that most people stay in there for hours. So we changed it to 25 minutes (which still felt too long to us). There was a lot of cool stuff in there but we didn't know what any of it meant and it was really hot. We didn't even go to the second floor (we did 2 weeks later when we heard what was up there. I'll get to that in a future post).

Back at the hotel we relaxed and watched part of a light show going on at the pyramids and then it was to bed. Next morning we were at the scary Cairo airport flying off to Amman Jordan. Jordan's landscape is just how I always pictured the Middle East: a hot flat desert with the occasional turban wearing camel riders and bedoins on the side of the highway. We rented a car in Amman and drove a couple hours to a tiny town just next to Petra, passing camel crossing signs and giant heards of goats along the way (we saw one goat wearing clothes which quickly became the source of many jokes for the rest of the trip).

Petra area was interesting. It was very dry and mountainous and our really really cool hotel sat on a very high point overlooking the city. In my next post, I'll include pictures of it as well as the explanation of why we went to Petra for those who aren't familiar with what's there. 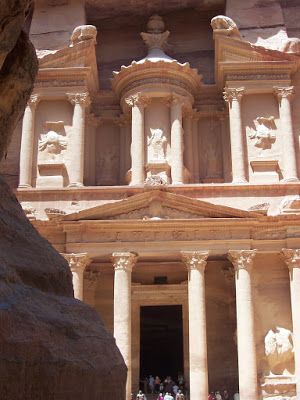 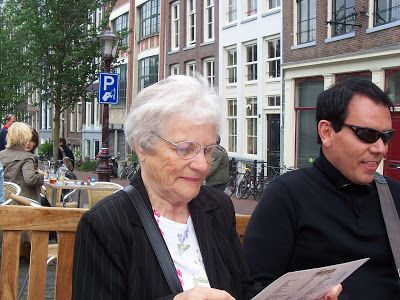 We started our trip off in Amsterdam. This was the first time I've been to Europe since my mission three years ago and it was so fun to be back.