We started our trip off in Amsterdam. This was the first time I've been to Europe since my mission three years ago and it was so fun to be back. Our first day there we met up with Uncle Will's friend Lori, who works and lives just a few hours away, and went around the city a bit, wandering only once into the red-light-district (oops). I have to say, Amsterdam is beautiful and trashy! The whole city looked like how you would picture the red-light-district and the red-light-district looked like the rest of the city, only more congested with filth. After a while Nona (my grandma) finally told us "I don't like the way I feel here!"

That said, Amsterdam really is beautiful. The streets are narrow and twisted and all the buildings are leaning into each other, making the whole place feel like something from a Dr. Seuss book (only with a lot of pornography and half-naked prostitutes advertising themselves in the windows--I think it may have been a cut chapter from "Oh The Places You'll Go"). Nothing too eventful happened other than having about 10 different taxis refuse to take us back to the hotel that night for reasons I still don't entirely understand but I believe had something to do with it being a shorter, less financially beneficial trip than the drivers wanted to embark on. Finally Lori got us in one and told the driver that she was not getting out and he could sit in there with her all night if he wanted. After a lot of fighting and getting the hotel on the phone with the driver and the driver telling us "this is not fair my heart!!!", we finally made it back, one very quiet and awkward taxi ride later.

We spent the second day in Amsterdam as well and first went to the Ann Frank house which was really amazing. It was pretty unbelievable to walk through the rooms and see where it all took place. One of the pictures I'm posting here is of a wall in Ann Frank's room with pictures that she put up when her family was hidden there. There was a really creepy and somber feeling in the whole house as we walked through.

That evening we went to the airport to fly out to Cairo and said goodbye to Lori. The way we planned the trip, we would end up back in Amsterdam for a day at the end of the 2+ weeks. 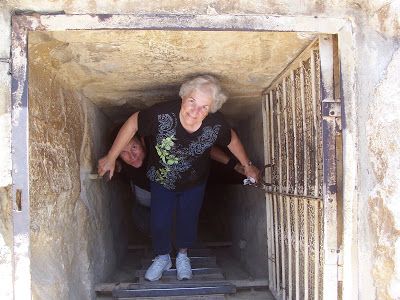 We woke up in Egypt. That wasn't of course until after we had a big run-in with the hotel who had a problem with us showing up in the middle

Well I'm finally back in town and while vacation is always a splendid thing, I must say it feels great to be back. This is partly because I've been sicker than I've ever been for the last two days, which I'll get to later,