I was told originally that I could work through the legal counsel I'll be with in Moscow to find housing for the month and a half I'll be there; so naturally I didn't worry much about it . . . until now.

I will be leaving for Moscow in a month and a half.  I've got my Russian visa application in.  I've got my plane ticket.  I'm studying my Russian.  But I am currently on the verge of being homeless in a giant unfamiliar and likely unfriendly city.  I started panicking about this a week or two ago when I emailed the general legal counsel I'll be working with to ask if he had any place for me to stay.  His response was basically, "I'll check around but here's a website you can use to find a place if nothing pans out."  On Sunday I emailed him again to see if he knew anything and I've yet to get a response.

My "panic" from Sunday night was "anxiety attack" by Monday, "violent heart attacks and vomiting" by Tuesday, "incoherent screaming and babbling while banging my head against concrete" by Wednesday, and "time to put on the ol' Depends, b'cause you have a lot of living to do!" by this afternoon.

I started looking through the website the attorney had sent me thinking, "I'm 63 years old.  I'm sure I can find an apartment by myself if needs be."  Well, the site didn't actually have any apartments but rather gave some advice about what not to do when looking for an apartment.  The first bit of advice was "DO NOT find an apartment online.  Wait until you get to Moscow to start looking." Additionally, the site told me that as Moscow is the priciest city in the world to live I can expect to get a downright crappy apartment for two months for no less than $1,500.  However, as a trade off for lowering my standards enough to settle on an apartment this "cheap", I would have to live in a neighborhood where you are more likely to be stabbed and killed by the jagged edges of a broken vodka bottle than (insert something very likely here).

I was then led to a part of the site that allows you to search through profiles to find "flatmates" who need help to split the rent.  Initially I said I would rather be homeless than travel to the other side of the world to live with an absolute stranger, unverified by anyone I know, who is more likely to mug and gang-rape me in my sleep than (insert something very likely here).

One panic attack and several Diet Cokes later, I was scouting out the online profiles.  As the site has thousands of profiles, it allows you to put in your expectations of your potential roommate so it can filter out those who don't meet your standards.  My initial search turned up nothing.  So I had to keep going back to the questions they had asked me originally to change answers and essentially lower my standards.  I found myself at first saying things like, "well I guess I don't mind if they drink a little," and "it's not that big of a deal if they have more than 10 cats."  When my lowered standards in those categories still turned up no matches, I found myself finally resorting to "well I don't care if he's a convicted felon," and "who doesn't have a long medical history of deranged self-perpetuating psychosis-themed disorders?" I thought this felt a lot like dating and marriage: you start out with high standards for a companion and when you realize that there aren't any who meet those standards in your price range, you lower them again and again until you finally get a match.  Then you have to decide whether you would rather settle with what you've got or live a lonely lonely life. Eventually I had lowered my standards enough to get one match.  Meet Zoro:

Zoro is a heavy drinker and smoker.  Zoro is 28 years old.  Zoro prefers to live with "gays and lasbians pleeeaase!"  Zoro's only listed interest is "sex."  Zoro is also "looking for someone who good time and fun personality so party so much!"  I won't even go into Zoro's profile picture.

Zoro originally didn't seem like a good match so I started over.  For reasons I still can't explain, when I answered the questions the second time I had several matches, most of which looked slightly more promising than Zoro.  I immediately sent out about 9 emails.  I've only received 3 in return so far.  One was a no go.  One simply said, "Ok."  Really.  That was the whole email response. "Ok."  I've yet to discover what got okayed.  And my personal favorite was from someone who found me on the site and her email said:

hello dear,
i am miss Katurah looking for a loving, caring and trust woethy man so i will like yoy to send an email to my box furctygirl@yahoo.com for more explanatio,s with my picture. waiting for your reply.
with love from miss Katurah.
I don't want to make any rash judgements, but miss Katurah seems like Zoro's type.  Except I don't know how "trust woethy" he comes across, whatever that means.
So here we are.
I guess life is sort of just made up of one challenge or problem after another. Some of them really aren't a huge deal (sort of like this one) and some of them really are. But regardless of the level of the challenge, the only relevant thing is that they are real for each of us as we go through them and that's enough to make them a big deal in their own right.
Ultimately, I'm learning at least one incredible lesson from the experience and that's that while the world sometimes seems full of the Zoro's and miss Katarah's which are great for entertainment purposes, it's also full of a lot of pretty amazing people.  Throughout this week I've casually mentioned my problem to several people, busy people even, and throughout this week I've seen person after person offer their help and support when I didn't ask for it.  I met one person at school today who, I found out, knows many people in Moscow; 30 minutes after I told him that I was having a hard time finding a place to live he found me to let me know he had typed up a one page letter in Russian and emailed it to about 20 different people to see who could help me.  Yesterday I heard a girl that I don't know at all get on her phone to ask a friend about a possible housing connection she may have had in Moscow after this girl overheard me discussing the issue with a friend of mine.  I randomly received an email from a woman in Moscow who was contacted by a customer at the bank who asked her to write me to see if I needed any help.  The list goes on and on.
Ultimately I think that that's what is really important; and I likely won't remember much about this process for the rest of my life but I'll always somehow be affected by the kind of support and care people have shown me.  And in a world that seems to focus on finger pointing and who-hurt-who's, it's nice to have these rays of sunshine here and there.
~It Just Gets Stranger

By way of update: Last night I was scouted out by another person who is looking for a roommate online. So far Miss Rita is 2nd only to Georg and his boyfriend who want me to come and live with them in the southern 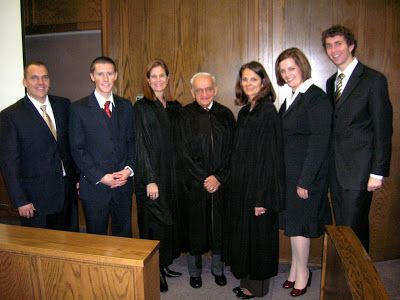 Here are a few pictures from the trial advocacy competition of a couple weeks ago. These were taken just after the completion of finals. In the group picture you can