Whenever Krishelle, Uncle Will and I travel anywhere (mostly thanks to Bridgette) we constantly sing the "Kentucky Fried Chicken and a Pizza Hut; McDonalds, McDonalds" song and we get really excited if we can spot all three places at once in whichever freaky third world country we're in. So, naturally, for the last few days from opposite ends of the world, and in preparation for the crew to make their trek east, we've been singing the song non-stop but replacing "McDonalds" with "Mc-banya" among other things. I think our most recent Russified version of the song is "Russian Fried Chicken and a Vodka Hut; Mc-Banya, Mc-Banya." As I type now, I'm laughing about this as though it's the first time I've heard it. I don't know why I just shared that with you. I've had little sleep this week.

Yesterday morning some friends and I got up bright and early and left Moscow for a large orphanage about an hour or so outside of the city. This wasn't the first Eastern European orphanage I've been to but it was by far the largest, having about 140 children of almost all ages and genders. To make it more interesting and sad this was an orphanage for children with special needs, or, as we were told by the friend that brought us there in a strong Russian accent, "psychologically disturbed kids." This seemed be a big range of problems. Some of the kids seemed relatively stable and others were completely out of it and most were somewhere in between. It was difficult to really get a great sense of this however as most of the children seemed heavily sedated and walked around looking like zombies. The building was huge and a couple of hundred years old. DHL was sponsoring a service project (I believe they go out there every few weeks) so my friends and I went to help. We helped put together playground equipment for a while outside where we were bitten by no less than 5 billion mosquitoes; as I type, 2 pints of my blood are hovering somewhere in a forest in western Russia. Hopefully it ends up in a blood bank eventually. After a while we went in and played with the kids who were so cute and sweet. One 5 year old boy kept coming over to give me hugs. I just wanted to take him home with me. All in all it was a really good experience for us to go out there. As always it was so heartbreaking to see so many kids with little chance for a better life. But I'm thankful that there are people out there willing to go to these places and donate time and money to make them a little better and sometimes going as far as adopting children from all over the world who need to be rescued.

I'm having a really hard time right now as this Moscow experience starts to wrap up. In the interest of not giving the wrong impression I must preface the next few thoughts by saying that I really miss my family and friends in the states and I am so excited to see everyone again. I love my life in Provo and I love what I'm doing there now. That said, I really don't want to leave Moscow right now. I have never felt so comfortable before. I feel like I fit in better here than anywhere I've ever been. I've made so many great friends. I love the city and I love the international branch I go to. I love the office I'm working in and the people I get to be with every day there. There's just something about this place that really fits me and I've never felt so content before. The only thing missing is all of you out there reading. That's the hard thing about moving around to different countries around the world; everywhere you go you leave a huge piece of yourself there and it makes it so that everywhere you go, you feel like something is missing. I suppose this is just something I'm going to have to learn to deal with.

Work has been busy and interesting as always. Church exploring has remained exciting and borsht eating has been fantastic as ever. I'm looking forward to seeing my travel group here in just a few days. Hopefully it will warm up by then. The last 2 days have been rainy and really cold, an extreme change from last week when I layed out on the beach for about three days and roasted in the hot hot sun. C'est la vie.

10- Jelly Chocolate Cookie in the Banya: I know, I ate something in the banya. I formally apologize to all of you who I may have offended by my doing so. Normally I would never put something in my mouth that has even flown 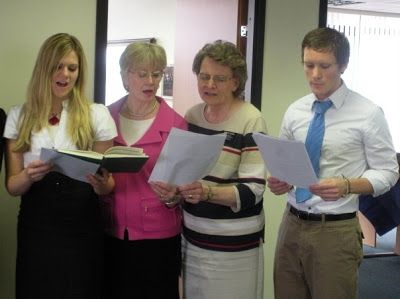 I'm going to make this quick because it's later than I thought it was but I wanted to get an update out and post some pictures. I haven't been paying