Before I rant and rave about my most recent rantworthy rave, I want to let those of you in or near the Provo area know that I will be telling my story of having major surgery in Eastern Europe on The Porch this Thursday (Jan. 12) at Muse Music at 8:00 PM. For the event page, click here. We would love to see/meet any of you who can make it.

Now to more important things: the ever approaching doomsday, May 5th, 2012. Several months ago, in a panic, I went through the 275 step process to register for an Ironman (I found it quite fitting that the registration process itself was like an ultra-endurance event--one which I felt like I deserved a medal of honor for completing). At the time I thought this was a fantastic idea, partly because May 5th seemed like an eternity away. I have the unfortunate habit of considering anything that takes place no sooner than two seasons in the future to be "an eternity away," which very tragically diminishes my ability to make good decisions at times of great pressure. For this reason I have committed myself to "survive" (the term I use instead of "run") multiple marathons and miserably endure several camping trips in my life. But the moment of panic that led to Ironman 2012 was unprecedented, as was the fruit of said panic (I think it may have all been part of an early mid-life crisis (I hope "early" is accurate)).


After registering, I immediately began inserting myself into and violently flapping around bodies of water (without floaters!) as I understood that I will be expected to propel myself forward halfway across the ocean at the beginning of said race. After several months of doing this with some regularity, the "progress"  in the pool has been such:

1. I have come to understand how to very efficiently move to the side to let people pass me.
2. I now wear tighter swimming shorts so I appear more competent when standing on the side of the pool while stretching and making my serious face.

On the list of things I've yet to accomplish:

And swimming isn't my only problem. As it turns out, after completing the swim across the world, I'm expected to load myself onto a bike and ride it for the next five or so hours. Fortunately they say that riding a bike is just like riding a bike so I fully expect all of my skills from 1994 when my friends and I started a temporary bike gang (with an anti-drug message) will come flooding back to me. I need those skills to come flooding back to me because currently my exhaustive list of experiences on an actual bike since 1994 consists solely of a very long day on a two-wheeled purple contraption with flat tires, a large basket full of bread, a bell, and brakes that only worked if I was going up-hill at the time of use (true story). I have had some experience on stationary bikes, forced to ride them for several months in 2002 when I developed a running stress fracture. I lovingly referred to the two bikes I used as "Chester the Molester" and "Curious George," for reasons you don't want to hear.

To begin to combat the biking problem, my friend and I attempted to attend a spin class this morning that started at (brace yourself) 5:45 A.M.!!!!!!!!!!!!!! I know what you're thinking, "isn't that illegal?" My understanding is that it is not, although I've yet to research this. But this could be a good time to start calling your representatives to demand change. And it gets worse: as we approached the spin room at 5:40 A.M. (!!!!!! :-( !!!!!!), we were greeted by an already completely saturated class of go-getters who had apparently all been there to claim their bikes since sometime before Hanukkah. What this means is that I got up around the witching hour just to get rejected in front of 3 dozen people who are more motivated than I am.

Unfortunately my big mouth has told every single person I've come in contact with about the upcoming event so now any repeat encounters with anyone inevitably turn into the Spanish Inquisition about how my training is going, which in turn invokes CTSD (Current Traumatic Stress Disorder--that's a thing, isn't it?).

I had a horrific dream last night (the word "nightmare" doesn't quite do it justice). It involved the two creatures you have all come to know and love recently, but both of which are absolutely the most terrible things that I believe have ever 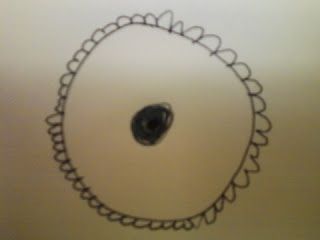 This weekend the winds of strange blew me southwest to southern California and Mexico. My friend Dan and I decided sort of last minute to roadtrip our way to the