It will probably be easiest to absorb this post's information if you imagine me sitting on my front porch holding a rifle on my lap and intermittently yelling at children to get off my lawn.

I've had a lot of conversations over the past couple of years, usually with my crankier friends, about the changes we've seen in the last decade that seem either to be caused by or demonstrated through social media. There appears to be a new level of narcissism and attention-seeking that is magnificently displayed on the Facebooks and the Instagrams and the Snapchats and an array of other social media outlets I know so little about that when they are referenced I usually think people are talking about food.

I've heard the generation one or two steps below my own sometimes referred to as the "selfie" generation. It's often thought of as a group that is obsessed with attracting social media followers and obtaining as many "likes" as possible on every post shared. They thumb through their own Instagram feed, implicitly double-tapping on every photo without really looking at it, aware that liking each post is expected by the followed and a requirement for guaranteed mutual liking.

I know it sounds ridiculous, but I've seen people get upset more than once that a certain person frequently fails to like their Instagram photos, "even though I always like theirs."

With some regularity, people will reach out to me through Instagram and offer to follow me if I follow them first. They call this "follow for follow." They are barking up the wrong tree because this gentleman's agreement is nonsensical to me. My life is improved in no way by a stranger following me just because I follow them. The incentive is worthless. But it appears that many of the kids today have a different view on this entirely.

Maybe there's a thrill to seeing the "followers" number tick upward, even if this is only happening because the selfie generation broadly clicks and likes with the understanding that the "favor" will be returned. But I don't quite understand this.

Social media outlets are flooded with selfies--close-up pictures of the poster's face. I frequently see someone sharing photos of themselves with captions that explain how beautiful it is outside or how much the poster loves his/her friends or how excited the poster is that Halloween is coming. They find any way possible to include themselves in the picture that proclaims to be about something having nothing to do with them.

THIS DOESN'T MAKE ANY SENSE TO ME.

Many of these photos contain hashtags that imply or explicitly declare the poster's beauty. Hashtag male model. Hashtag muscle. Hashtag I woke up like this.

Groups of teenagers can be frequently seen sitting together, but disengaged with one another because they are taking selfies to "Snap" to the hundreds of mostly-strangers they have connected with through that very confusing outlet.

Occasionally I receive advertisements for services that promise to get me hundreds or thousands of new followers at once so that I'll look more popular. And these things exist because people want the attention, or the perceived attention. And they want it because they believe it will do something positive for them.

And ALL OF THIS is a problem.

I realize that these thoughts may sound closed-minded or offensive to some. And they may come across as judgmental and harsh, particularly because they are sort of simplifying an entire generation through an unflattering stereotype. And of course, there are exceptions to this.

But I think we are in trouble if we are unwilling or unable to recognize that the ever-increasing trends I've described above are putting our youth at risk of developing the habit of basing self-worth off of mass and sometimes anonymous validation. Or developing the habit of seeking attention in any way possible, even if the attention is nonsensical or meaningless or obtained through unproductive or harmful means. And we are encouraging a full generation of children to believe that if a certain number of people aren't looking at them at any given moment, maybe they aren't worth very much.

Some will argue that all of this just means that this generation is confident and that this is great. Because it is healthy for people to be confident and to feel comfortable broadcasting their attributes to the world. But watch a teenager obsessively check their phone to see how many people have liked their most recent photo, or watch that same teenager spend 45 minutes figuring out how to take a perfectly-angled picture of their new haircut and tell me that you think we are moving in the right direction here.

I worry that the kids are learning to obsess about how they look and are not learning to care about others.

I worry that we are raising a generation of people who aren't taught how to engage in meaningful conversation.

I worry that we are forgetting what it feels like to wait for something and are missing opportunities to learn patience and diligence in the process.

I worry we are bringing up our children to value form over substance.

I worry that we are losing the ability to enjoy the present because we are distracted by our developing reputations.

My own generation struggles to put the phone down and enjoy the company and atmosphere around us. And I worry that the next generations, the ones who are being raised by these habits rather than developing them in adulthood, are going to be in a far worse state when they start hitting their 30s, like my generation is now.

I think we have a responsibility to the youthhhhhhsss to help them see social media and its conduits as an amazing means of staying connected and communicating love and not as a vital source to feed a praise dependence.

I think we owe it to the kids, who are being brought up in a much more distracting world than we ever had to know, to limit their hollow electronic relationships that leave little room for authentic fulfilling in-person interactions.

And I think we have to be prepared to have conversations about validation's virtues and vices and how we can keep obsession with it from thwarting development and peace.

I'm not a dad and I'm not a teacher. I'm an opinionated 31-year-old man with an old soul and a constant geriatric craving for oatmeal cookies. But I'm concerned with the way we are collectively heading on this. And I believe that we have an opportunity, each of us, in our own spheres of influence, whatever they may be, to exercise some influence and teach that a person's worth isn't measured in likes or follows. 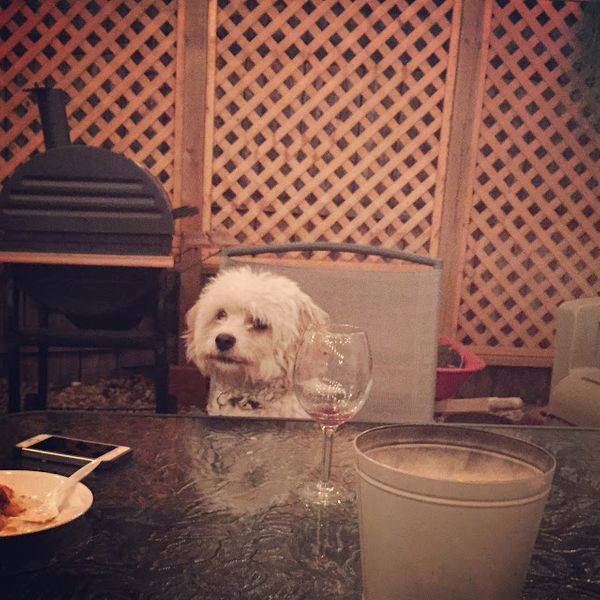 Y'all. Lee emailed me about the relative finder thing to tell me he finally figured out how to use it because apparently he didn't really know how to Internet. And 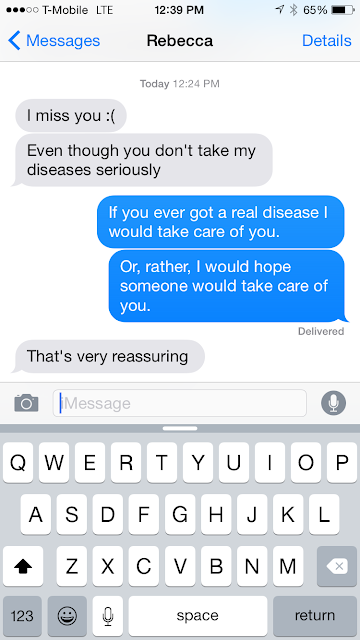 Eli: Becky, I need your help. Rebecca: I AM SO GOOD AT HELPING! Eli: I know. That's why I called you. What the hell are you eating right now? It