I started law school in 2008, which may have been the worst possible year to start law school. The economic recession had hit the legal market hard, and when it came time for my classmates to search for summer jobs during our first year of law school, we discovered that no one was really hiring.

I was fortunate to secure, at least, a non-paying gig in Moscow, Russia—something to put on a resume. I had worked at a bank during my first year of law school despite a strong recommendation from law school administrators that we not have jobs since we'd be studying all the time. I needed to work in order to pay rent.

In Moscow, I was exceptionally poor. I had found a kind American family (strangers) who had offered to let me live with them. I ate cheap food from street vendors. I got a parasite and lost 20 pounds I absolutely could not afford to lose. My clothes were falling off my body. It was the best summer of my life.

I struggled to find work for my second summer. No law firms were really hiring interns because the economy was still in the tank. I applied for anything I could, only to discover that listings were either pulled or that hundreds of others had applied as well. I was fortunate, just weeks before the school year ended, to be hired as an intern in the Utah Attorney General's office by someone who is now an appellate judge and a very close friend. The job paid almost nothing, but it paid, and that felt like winning the lottery to me at the time.

When I saw my 2011 graduation date approaching during my last year of law school, the panic of anticipated unemployment began to consume me once again. Many of my classmates were scrambling to find work—any work. Still, it seemed hardly anyone was hiring. I was told then that law firms in Salt Lake City had not been able to bring on new attorneys for multiple years in a row, and no one knew when this would end.

Again, I was extremely fortunate, just months before graduating, to be offered a judicial clerkship for one year with an appeals judge in Salt Lake City—a judge who remains my friend and hero to this day.

But that job would only last a year. It bought me time, but not enough time, as it turned out, because, still, the job market was very bad for lawyers.

My co-clerk on the court had seen a job listing for something in the Republic of Palau. Knowing that my end date was approaching, she sent me the listing and encouraged me to apply.

Truly, I was desperate for a job, and this one in Palau, another one-year contract, was at least something. I applied and contacted everyone in Palau I could possibly find to beg them to hire me. I wasn't really qualified, per the listing on the post, but I think they took pity on me. I will never forget sitting in a courtroom in Los Angeles (I had nearly cleared my pathetic bank account to fly there) in an interview with the chief justice of the Supreme Court of Palau, telling him how much I wanted this job.

"As far as I'm concerned," he told me, "anyone who wants a job as much as you clearly do right now should have it. It's yours."

It was a supreme relief. It paid pennies, but it paid. And it included an interesting adventure. One that turned out to be very hard. But I've always been grateful I did it.

After I had been in Palau for about seven months, the old familiar panic of "what's next," started to consume me again.

I had been emailing every lawyer in Utah I knew, asking if they knew of anyone who was hiring. I was told, repeatedly, that law firms were still not hiring, but maybe I should start applying for one-year clerkships or other temporary jobs.

I can't tell you how demoralizing it all felt to be in this constant hunt for six years. I say this, understanding that I still had an immense amount of privilege. I was not at risk of homelessness. I had colonies of backup plans available to me.

I remember one time in law school during a particularly stressful period sitting down with my friend Annette to talk through this. She pulled out a piece of paper and wrote "dream job" on the top and "die in a sewer" on the bottom and said, "why don't we list, in order, every possible option and backup plan between these two extremes." We did so, and when we finished, she circled the bottom section, between "go to prison for a crime I didn't commit" and "die in a sewer" and said "these options are really unlikely. I mean, really, Eli."

It weirdly made me feel better.

In any event, despite my privilege of having an emotionally supportive family, an education, American citizenship, etc. etc. etc., I still felt an immense amount of stress about the fact that I had truly been working myself to the bone to try to be a lawyer and it seemed like I was never going to really get to be one.

Finally, in April, 2013, sitting in my muggy office in the equatorial tropics, I received an email from an attorney I knew named Randy. He was a partner at a big law firm in Salt Lake City. He told me that no one was hiring, but if I was ever in town, he would be happy to introduce me to other partners at his firm so that maybe they could keep me in mind if they ever did start hiring again.

This was truly out of character for me—I'm not a big risk taker. But I suddenly emailed him back: "I happen to be coming to Salt Lake City next month. Could I stop by then?"

I, of course, had not been planning a trip across the world. But this was the only even remotely positive response I had received in years from anyone at a law firm.

I cleared out my bank account, with a pit in my stomach, to buy a very expensive plane ticket to Salt Lake City. I found myself shaking my head through much of the four-flight journey. "What am I doing?" I kept whispering.

When I landed in Salt Lake City, I had an email from Randy. "Call me," it said. I called him and he told me that one partner at the firm had just told him that he thought he may be getting close to hiring a new attorney.

A few days later I went and met with this partner, Tom. We hit it off. He sent me an email just after I landed back in Palau. "I want to hire you. I've just recommended you to the board." I started sobbing. I cried off and on for days. I've never had such an extended and emotional reaction to relief before or since.

I returned to that law firm full of imposter syndrome that fall. I used to go to work at 4:00AM and spend hours frantically reading briefs and other legal work written by my new colleagues to try to learn something from them, terrified that any day someone would decide I wasn't smart enough to be there and I'd be fired.

I've never really written about my law firm. It never felt appropriate. From time to time people in my community will find out I worked there and they'll act surprised. My firm is a very religious and conservative place. It's not common to see an outspoken gay guy there.

When I was hired, I was still closeted and religious. Shortly thereafter I finally came out and stepped away from my religion. That was a very scary and sometimes supremely confusing thing to do while working in that environment. But I made a decision, very early on, to be completely honest and open about who I was. I was very tired of hiding. I brought boyfriends to firm events. I spoke my mind when lgbtq legal issues arose. I pushed my firm to adopt and take diversity initiatives seriously.

From time to time, someone I don't know has lashed out at me on the internet for working for a law firm that frankly didn't have a good reputation in the lgbtq world. I've never faulted anyone for having that reaction. I've had my reasons, justified or not, for being there. Certainly, after everything I had been through, I was grateful to be employed. I also had convinced myself that it was good that a voice like mine was in a room that didn't often have voices like mine. Looking back over the years, I don't know that I ever really made a difference. I may never know.

Earlier this year, I decided that it was time for me to move on. I told my law partners I had found a new opportunity and I was going to leave this place I had grown to know for nearly a decade. They were kind and supportive.

Last week I cleaned out my office. Drawers full of files from my very first cases. Letters from friends. Art I had brought in to decorate. A wood carving from Palau. I dejunked and condensed everything down to four boxes. Skylar came on Friday night to help me carry it all out to his car.

As we walked through the lobby on the 19th floor of this building where I had built friendships, had nervous breakdowns, came out to colleagues, courted Skylar over Facetime, fielded calls with a wedding coordinator—everything. My eyes just suddenly filled with tears.

Skylar looked at me and noticed I had become emotional. "What are you feeling?" he asked me.

I choked out, "sad. Relieved. Grateful. Nostalgic. Angry. I don't know. I feel everything."

He laughed, leaned over and kissed me, and started pushing the cart we were using to transport the boxes. Just then he hit his shin on the cart and yelled the F-word, which echoed through the lobby of this very conservative law firm.

I laughed. He looked at me again, and said, "come on. Let's get the hell out of here." And so we did, hand-in-hand. 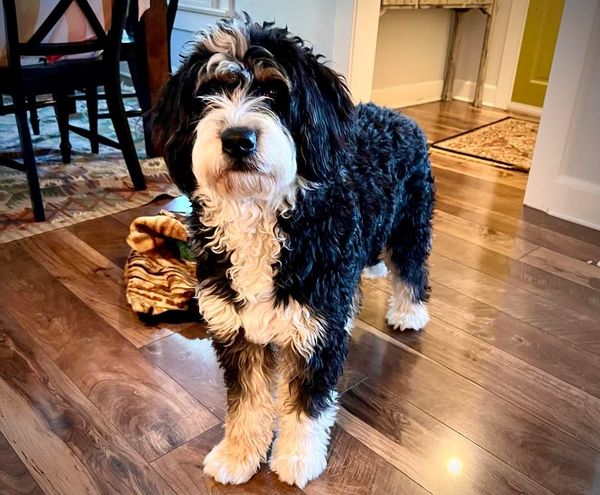 A handful of dog claws scraped across my face and I could tell marks were already forming. This is how I was awoken from not-a-great sleep, a new daily tradition

This time in Strangerville, Eli got a new job, Meg reflects on the Becky Edwards campaign, and Eli did a bad thing in a Tesco bathroom. Story Tesco, by Eli McCann Production by Eli McCann & Meg Walter Join our Patreon!