A handful of dog claws scraped across my face and I could tell marks were already forming. This is how I was awoken from not-a-great sleep, a new daily tradition I never asked for.

I opened my eyes to see Louie's grumpy face, his head tilted, his eyes wide like he had just witnessed a murder and he was staring the images directly into mine. A second later I raised my arm, just in time, to block his second attempt at scratching the hell out of me.

This is Louie's signal that he would like our attention—his demand that we start petting him and continue to do so until he's decided he has no further use for us.

Skylar rolled over in bed just then and snapped his fingers in a failed attempt to get Louie to lie down and go back to sleep.

Skylar had just gotten off of two weeks of 4:00 AM shifts and was very grateful for the opportunity to finally sleep in until 7:00. Louie, an animal who has the time and luxury to nap whenever he'd like and one who takes advantage of that privilege for the majority of every single day, was not interested in returning to this later start time after fourteen days of early birding.

"Fine," I moaned. I began to scratch his ears until he flopped over onto my face, all 45 pounds of his dense body suffocating every breathing avenue god bequeathed to me at birth. I shoved him off of me. Down at my side, a half-asleep Duncan sighed a monologue at me that, if I interpreted it correctly, began with "I literally never wanted you to bring him home" and ended with "it's not too late to ship him off to a farm."

Louie jumped off of the bed at this point and began his highly-vocal series of morning yawns and stretches. Even when we're exhausted, we have to admit this is cute.

"I'll take him," Skylar grunted, rolling himself into a standing position next to the bed. He invited Duncan to join them outside for morning potties, but Duncan responded in more sighs and instead stayed inside with me.

A few minutes later, I was again awoken, this time by a very wet dog face that had fully rested on top of mine.

"Sorry," Skylar interrupted. "The garden sprinkler was on. He put his entire mouth over it and swallowed a gallon of water."

He likes water, probably because it's cool. He likes to put his entire mouth into his water bowl and blow bubbles. I've never seen an animal do this before. It's our least favorite of his habits, which include eating poop by the way. We have rags and towels—a full army of cleanup supplies—strewn around our kitchen at all times.

I pushed Louie's face off of mine. He stood up and stomped down to the end of the bed where he found one of his many many many bones and he began loudly chewing it. The sounds of his needle teeth rubbed back and forth across the bone so rapidly and with such force I was half convinced he was about to start a fire.

Eventually he gave up on the bone and instead started chewing my foot through the blanket. I resolved to let this continue because we've learned that with this monster, forfeit, the path of least resistance, is usually the easiest for everyone. God, we're going to be good parents.

We climbed out of bed and began getting ready for the day as Louie relocated to the living room couch to begin his first five-hour nap.

This time in Strangerville, Eli has yet another bathroom mishap, Meg is awkward at restaurants, and Eli shares a story on the Strangerville Live stage about some unexpected travel companions in Ukraine. Story Edith and Beau, by Eli McCann Production by Eli McCann & 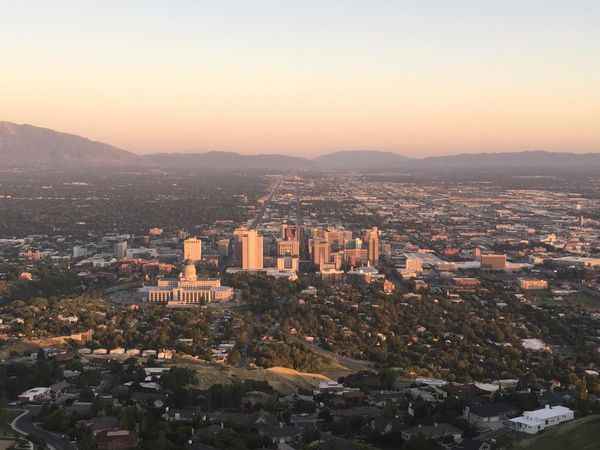 I started law school in 2008, which may have been the worst possible year to start law school. The economic recession had hit the legal market hard, and when it