On Friday night Skylar started having a meltdown.

To give you some perspective, his meltdowns don't look like mine. Mine are like the Chernobyl disaster. His are more of a "I've slightly burned the crust."

But since he has them so infrequently, they are very unsettling when they do happen.

I was recently trying to explain to some coworkers what it's like to live with him. He's unlike anyone I've ever met. Somehow simultaneously productive and accomplished while also blissfully unaware. "He's the only perfectly calm and easygoing person I've ever met who is completely frozen by crisis," I said.

We're lucky that we're different in this way. I'm a constant stress case. Every muscle in my body has been constantly flexed since at least 2008. His daily energy, on the other hand, is very much like those old Mickey Mouse cartoons back when he looked much creepier, but was usually seen briskly walking, his arms swinging in front of him in enthusiastic propulsion, a chipper whistle coming from his puckered lips.

But then on Friday, out of the blue, Skylar told me he was feeling "concerned."

He had been locked in the house for two weeks because hashtag covid19 hashtag apocalypse hashtag rofl. Skylar's major outlet has been scheduling walks in the neighborhood with a medical school classmate of his who lives nearby and has been socially distancing in her house. Every few days they take Duncan out for a stroll around the neighborhood, avoiding getting too close to one another. This has been enough socializing for him to keep himself sane.

But then the classmate canceled on him on Friday for some reason or another.

Normally canceled plans are not too alarming to him. But we aren't living in normal times. And the moment he received the text he shouted (Skylar translation: "stated with slightly more force than a polite flute") "What am I supposed to do now?!"

I've been having problems with my Achilles tendon, to the point that I'm trying to stay off of it before it actually snaps in half and they have to put me down. This is the worst possible timing for a distance runner who releases his obsessive anxiety disorders through cardiovascular activities (I've been going on 15 mile runs lately just to calm myself down).

Because I'm hashtag injured, I told Skylar I probably shouldn't go for a walk with him. But once I saw the mildly soft meltdown, I knew things were serious and I probably ought to try to help. So I volunteered to go with him.

20 minutes later we were wandering some Salt Lake City neighborhood, accidentally finding ourselves in a graveyard. I still don't know how it happened. It seemed so poetic considering the time we're in.

There we were, Skylar beaming in the evening sun, having overcome what I guess counts as a panic attack for him, Duncan bouncing with oblivious joy that his dads are spending all of their days with him, and I, limping from an overuse injury, slightly smiling and barking at my still-new husband for walking a little too fast so close to this supposed end the world.

This time in Strangerville, knitting, dentists, and more earthquakes. Also, a man takes the Strangerville Live stage to tell the story of hiding from a kidnapper. 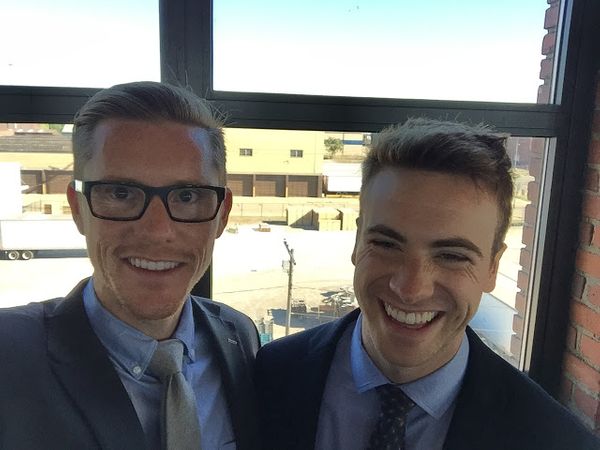 I just came across a picture in my phone from 2015. It's the first picture I ever took with Skylar. We had met in person for the first time just

This time in Strangerville, knitting, dentists, and more earthquakes. Also, a man takes the Strangerville Live stage to tell the story of hiding from a kidnapper. Story: Kidnapped, by Stacey Harkey Production by Eli McCann & Meg Walter http://traffic.libsyn.com/strangerville/Episode_