I just came across a picture in my phone from 2015. It's the first picture I ever took with Skylar.

We had met in person for the first time just the day before this. I had flown to Cleveland to go to a wedding with him. I thought I was being crazy. I've told that whole story before.

I felt like a crazy person for trekking halfway across the country to meet up with an internet stranger, but I convinced myself this would make a fun story no matter how it turned out. I felt like when I looked back much later in my life I would probably regret not taking chances like this and being a little more spontaneous while I was young and single. There was very little chance that I would later regret having done this. I mean, if it went bad enough, I would just be murdered and therefore not really able to regret anything at all.

To be honest, I really didn't think this would go anywhere. Skylar lived in Wisconsin. I had put down roots in Salt Lake City. It was frankly a miracle that we even connected on Tinder during his one-hour layover in an airport twenty minutes from my house.

Skylar might claim otherwise, but he wasn't really much more optimistic than I was. He called me as I was sitting in the Salt Lake airport getting ready to board my red eye flight to Cleveland. "Are you sure you really want to come all the way out here?" he asked me.

"Well, this is a fine time to be asking me a question like that!" I told this person I had never met.

Skylar said he just suddenly felt a lot of pressure and "what if you meet me and you're just disappointed."

Looking back it's amazing to me that Skylar thought meeting him could ever amount to anyone's disappointment.

I have since scolded him for this phone call on a semiannual basis. I put a reminder on the calendar and do this every six months. I will continue to do this until he or I or both have been killed in a completely avoidable accident.

I actually met him in a hotel lobby the day after I landed in Cleveland. He had just driven in from Madison. That night we ate tacos on a small bistro-lit patio at a restaurant on the end of town. He made me laugh as he adorably explained to me how he successfully accumulated millions of points of something called neopets.com, a website I still haven't looked up.

"It's too bad this relationship probably can't go anywhere," I thought to myself.

Nearly five years later he sits in the room next to me as I write these words. We're socially distancing from everyone else together, in our pajamas and wedding rings. He's clankity-clank typing on his laptop, hopefully studying for medical school and not checking his Neopets account. I sometimes forget to be amazed that we got here. I guess in hindsight the trajectory that once seemed impossible really looks inevitable—obvious, even.

If you get on social media or check the news right now, it's not hard to find hundreds or thousands of people doomsdaying their way through COVID-19 and other apocalyptic predictions. It's easy to get so full of anxiety in this that it actually becomes debilitating.

Sometimes when I get feeling overwhelmed by bad news and the world's reactions to it, I remind myself that I can't fix everything; instead, I think about one thing I can do to make my corner of the world a little better, and I try to do that.

And then I remind myself that although bad things can and do happen, you never know what good trajectories that seem unlikely now will later look inevitable—obvious, even. 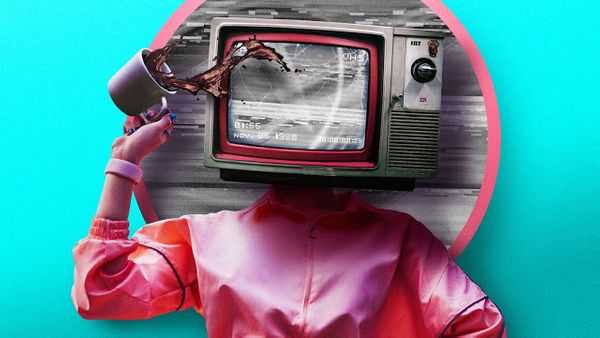 Recently I stumbled upon two early 80s films about the Word of Wisdom I somehow missed during my childhood, and if I now have to know they exist, so do you.

On Friday night Skylar started having a meltdown. To give you some perspective, his meltdowns don't look like mine. Mine are like the Chernobyl disaster. His are more of a