Skylar has moved onto his second rotation now, family medicine. As I understand it, that's the same as regular medicine except it sometimes posts racist things on Facebook and Thanksgiving is usually awkward.

His schedule has been better than when he was doing OBGYNQRSLMNOP where everyone seemed to think negative eleventy o'clock in the morning was the best time to have hundreds of babies. Family medicine is much more reasonable. He rolls out of bed at about 5:30 and then shows back up at home sometime around 7:00 PM, at which point I meet him at the door with our daily affair-accusation greeting: "WHO IS SHE."

Yes, I know I just called getting out of bed at 5:30 "reasonable" and yes I hate that I did that but it's all relative. I'm coming off of a couple of weeks of graveyard shifts where my zombie husband hopefully didn't run over entire families with his car on his way to or from the hospital at all hours of the day and night. During the graveyard times the only way I knew he was alive was that I'd periodically find water mysteriously running and car keys in the refrigerator.

In college I had a professor who's wife was also a professor, except they taught at universities on opposites sides of the country. They were pretty much only ever together during the summers. At the time I thought that seemed crazy; how could you possibly make a marriage work if you never see each other?

I'm starting to get it. I haven't seen Skylar since before the war and you better believe we're still going to claim the tax benefits come next spring.

Skylar may have discovered the trick to keeping a strong marriage, though. The other day he was waxing philosophical about relationships, always a dangerous thing for him to do when he's severely sleep deprived. He was giving me a speech about how good relationships always take a lot of work and he thinks some relationships fail just because the people in them try to take shortcuts, blah blah blah. I don't know exactly. I was busy watching him repeatedly attempt to put the wrong shoes on the wrong feet while he was saying all of this.

Anyway, after a minute or two of his monologue he paused, looked thoughtfully, nodded to himself, and then said, like he just finally made a decision on this, "I think you've helped make our relationship work." I was so relieved to hear he feels I've contributed to his marriage.

Skylar's mother once told me this is his world and we're all just living in it. At least it will be a funny one.

Now, please enjoy a new story from me about Palau on this week's Strangerville:

This time in Strangerville, Meg is moving away from Eli, waterbeds are birth control, and Eli tells the story of working for the Palauan judiciary. 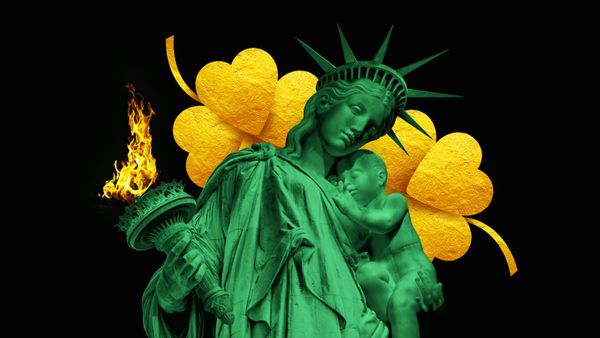 When my husband and I got married he was undocumented. Our honeymoon was spent driving cross-country from our wedding in Nashville back to Utah because he couldn’t fly. We

This time in Strangerville, Meg is moving away from Eli, waterbeds are birth control, and Eli tells the story of working for the Palauan judiciary. Story Footprints, by Eli McCann (music by Squire Tuck [https://freemusicarchive.org/music/Squire_Tuck/2015021152908025/Ukulele_Blues]) https: