"Time for bed!" He said it so cheerfully. In a tone like he was breaking good news.

"Sky," my own tone was one of exasperation. "It's still light outside." I walked to the window to verify. "Oh. Even worse. The freaking sun hasn't set."

Skylar explained that he had to be up at illegal o'clock for work or affairs or ILLUMINATI or something and "don't you want to go to bed now so you don't have to stay up by yourself and be lonely."

This was a Saturday. A SATURDAY. Back in my youth, when my bones never creaked and my clothes fit my body, I wouldn't have even started making evening plans by 7:55 PM. It wouldn't be until like thirty minutes later that I, so full of hope and young energy, the kind you have when you don't yet know the taste of Tums, would text friends "drinks and then clubbinnnnn!!!!!" There may have even been more n's than that! I don't know. It was a long time ago. Back before the war.

And now, last Saturday, there I stood in a dwelling for which I pay government taxes, a dwelling which I regularly call "that ol' money pit hehehe" to the neighbors when we're making small talk over our shared fence. I stood there, on laminate flooring, listening to this person who stole my youth at the same time I stole his in a ceremony before all the legions of gay heaven tell me—once fun Eli—that it was "time for bed!" at 7:55 PM on a Saturday night.

He, like you, needed context I forgot to provide as I routinely forget he has not lived my entire life with me.

"My cousins! I used to have to go to their house for sleepovers on Saturday nights! Their parents made us go to bed so early we could hear children half our age out playing in the street from the tiny bedroom where we lay, listening to cassette tapes of Mormon primary children singing Mormon primary songs! I still can't hear 'I Am A Child Of God' without smelling pee!"

Skylar opened his mouth, probably to ask some questions, shook his head, and then shut it.

"They tattled on me for saying 'butt!" I continued. "And then the next day their parents made me go to all three hours of church and then stay in my church clothes for the rest of the day!"

Skylar looked puzzled and concerned. "But, you understand," he reasoned with me, "that I'm not requesting that you do, well, any of that, right? I just need to go to bed. And the dogs agree."

He was referring to Duncan and his best friend Jude, who was staying with us that night. Both dogs had already retreated to the bedroom.

"They don't get a say in this," I yelled. "Those dogs have been napping together all day!"

"Well, you don't have to go to bed if you don't want. But I need to sleep," he said as he walked away.

I stood in the living room for a moment or two longer, sighed, and followed him to bed, because I had to admit, it was a little lonely.

This time in Strangerville, have you ever had a brief but meaningful encounter with a stranger that left an impact? One man tells the story of his day at Stonehenge and how it changed the course of his life. Also, only 5-star hotels for 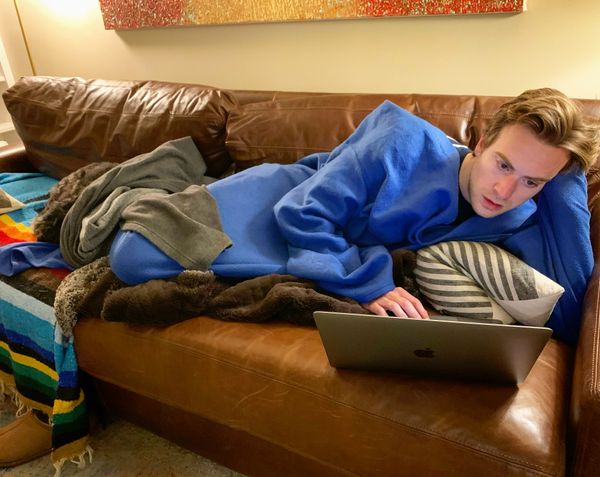 Skylar had already been gone for hours when I walked into the kitchen Tuesday morning. I know he had left around 5:05 AM because he accidentally woke me up