Skylar had already been gone for hours when I walked into the kitchen Tuesday morning. I know he had left around 5:05 AM because he accidentally woke me up by shining his iPhone flashlight in my eyes and said "sorry! I'm looking for my sweater."

"What time is it?" I whispered, like I was worried about waking up our nonexistent children or roommates.

Duncan was curled up to me, his head on my chest, glaring daggers at Skylar for waking us up so early. I pet his head a time or two, thought about asking Skylar why he was looking for a sweater at 5:05 AM in the middle of July, and then remembered who I married.

"You just never know," he had told me only a week before on a 104 degree day when he had run back into the house while I sat in the car to grab a hoodie for our dinner at my sister's house across town.

"Sometimes you do know, honey," I argued with him as we drove away. "Like on days when it's 104 degrees."

He turned out to be right. Or he was being stubborn and trying to prove a point. Either way, he was wearing the hoodie not even an hour after our argument.

I tried to fall back asleep after he woke me with the flashlight. It was hard to be annoyed. I knew he didn't mean to do it. He's more thoughtful about my sleep than I am. He had slept in the guest room down in the basement—had brought a change of clothes down there the night before, even. "This way I won't wake you when I get up early in the morning," he had told me.

"You seem tired lately and there's no reason both of us should have to get up so early." He was halfway down the stairs as he yelled that last part to me, hugging to his chest a handful of clothes that apparently, absentmindedly, didn't include a sweater.

Eventually I picked up my phone. It was now nearly 6:00. I scrolled through Twitter and resisted the urge to open TikTok or my mail app. I thought about just getting up for the day, but somewhere during that thought I dozed off back to sleep.

Suddenly it was 8:00 and my alarm was ringing. I had a flight in an hour and half—Dallas, for a work trip. Duncan had jumped to the floor and was doing his morning stretches. "Good morning stretches," I said to him, almost subconsciously.

As I walked out of the bedroom, my phone buzzed—a message from Sky: "will you please water the flowers? I didn't have time this morning."

He planted dozens in new pots he bought during his month-long break in June and he's diligently fought to keep them alive during the 104 degree days I forgot to warn him sometimes happen before he moved to Salt Lake City. "Is this normal? This can't be normal," he yells at me every July.

The fact that he texted me just then means he must have had a short break at work. He's doing an outpatient rotation at the hospital down the street this month. "Goddesses. All of them," he says when I ask him about the people he's working with.

"They can't all be goddesses," I challenged him once.

"Most of them are once you get to know them."

I responded to his text and told him I'd "try." I did have a flight to catch. I felt sheepish for telling this man who had been at work for hours that I didn't know if I'd have time for a quick task because I had slept in.

I walked into the kitchen. Sky had ripped a square from the paper towel roll and scribbled a note for me to wake up and see.

I smiled. He does this often, and it never gets old.

The flowers got watered and a minute later I ordered a ride to the airport. As the car was pulling up, I scribbled my own note just next to Sky's.

This time in Strangerville, Eli babysat Meg’s children. Or did they babysit him? Some existential crises about the vastness of space. And a woman has a mishap in bed with were nemesis. 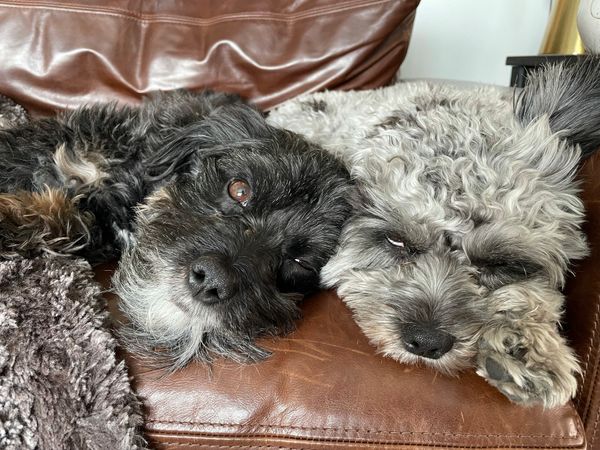 "Time for bed!" He said it so cheerfully. In a tone like he was breaking good news. "Sky," my own tone was one of exasperation. "It's still light outside." I

This time in Strangerville, Eli babysat Meg’s children. Or did they babysit him? Some existential crises about the vastness of space. And a woman has a mishap in bed with were nemesis. Story Softball, by Laurel Sorensen Production by Eli McCann & Meg Walter