"We really should bring Duncan. He hardly ever gets to take a vacation and he could use one considering how hard he works."

Skylar was referring to our fall trip to Park City. We do this every year—take a weekend in early October for a quick break from our jobs. We use it as an anniversary celebration now, since we got married on September 28, 2019. But we've been doing this since 2016.

We learned years ago that the resorts in Park City tend to be empty in October, just before ski season has begun, and so prices are a quarter of what they will be by January. Instead of buying plane tickets to go somewhere, we just splurge on a suite with a kitchen, pack food for three days, veg out, cook, hike, and occasionally wander the halls to see if we can find other signs of human life.

"Do they even allow dogs?" I asked Skylar.

"Yes! I called them and asked and they were so nice and they encouraged us to bring him and said they would be OFFENDED if we don't!"

It sounded like some embellishment, but maybe only if I'm underestimating his charm with customer service personnel over the phone.

And so on Friday morning I found myself packing for three: two grown men and an 18-pound dog who has almost as many possessions as the rest of us combined.

"It was hard to narrow down the toys," I told Skylar as he shut the back door of his Subaru Outback. "But I brought the ones that I thought would most remind him of home."

We drove the 45 minutes up into the mountains, Duncan sitting on my lap, his tail wagging, his face occasionally turning to mine to lick it in grateful and giddy anticipation for whatever adventure might await him.

Moments after we released him into the suite, he began running around us in circles, whining and yelping and jumping at us, like we had just deposited him at the pound.

"Duncan," I said in full exasperation, "this is a five-star hotel. There are dogs in Russia who would be happy to have what you have."

And thus began a 60-hour game of "can we leave the room without drama." The first time we tried it—to go to the hotel gym—Duncan slammed his little body against the door so hard that we thought he might break through. Then he engaged in barking and crying so loudly it echoed down the halls.

Skylar and I found a bench just a bit away from the door. "Let's sit here and see if he calms down," Skylar suggested, holding my hand and urging me to resist the temptation to give in to the tantrum.

"He sounds so scared," a tear formed at the edge of my right eye. I sucked it back in, because I'm brave.

"We'll have children one day. We're going to have to be better at this by then," Skylar forfeited, a notable defeat in his voice, only a few seconds later as I ran back into the room to assure Duncan we hadn't abandoned him forever in this unfamiliar place.

We discovered the hotel served chicken sausage for breakfast, and so, after taking him on a miserable snowy hike through the surrounding mountainside, we gathered some as a bribe.

"Maybe if we distract him with food when we leave he won't get so upset," Skylar suggested before quickly changing the subject after I asked him, "wait. Is that what you do with me???"

"Shush," he commanded, handing me a packet of fruit snacks from his jacket pocket.

The chicken sausage seemed to do the trick later that day when we went into town. I broke it up into small pieces and hid them among his kibble in his bowl so it would take some time for him to fish it out. We sat on the same hall bench for a while to see if a tantrum would eventually unfold. It didn't.

When we got back to the room, Duncan was on the center of the bed, unwilling to come greet us, looking slighted and ready to hold a grudge for as long as the attention span of a canine toddler will allow. Thirty seconds, as it turns out.

We checked out this morning, gathering the legion of dog toys scattered to and fro about the suite.

"Don't forget the special dog treats we got for him at that fancy boutique on Main Street," Skylar reminded me of the only souvenir we purchased on our weekend getaway. A guilt souvenir, really.

And then we drove home, petting the anxious dog who never asked to be taken on a vacation in the first place, apologizing to him for the unrequested pampering.

It was so nice to celebrate our love.

This time in Strangerville, did you hear about our kidney donation? Meg is trying to potty train a human and there is pee everywhere. And an Amish man anonymously writes about his experience living in his community in the closet. Story: Stepping Out, by 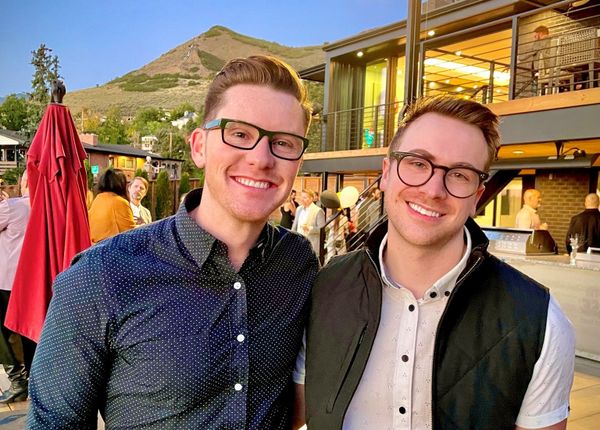 Skylar climbed into the car, half naked, and said "I'll just get ready on the way." It was so casual, the way he said it. Like this was an obvious