I'm not sure Louie is ever actually going to learn his real name. Not because he's dumb. This dog is not dumb. I wish he was a little dumber than he is. Then maybe he wouldn't have already learned how to open baby gates and make himself at home wherever the hell he wants in the house.

No. I don't think he's ever going to learn his name because we really rarely use it. We only say "Louie" when we're performing our favorite bit with him: talking at him with a strong Bostonian accent like he's a gruff blue collar worker cast to play the best friend of Mark Wahlberg in a depressing film about the middle class. And even then, we usually call him "Lou!"

"Hey Lou! How'a things down at the quaaaarrry? Tell your ma I sai hello!"

We don't think he's ever going to learn his name because we usually just call him "baby monster," or "monster" for short. Believe me when I tell you that he's earned this.

Baby monster is growling at us and chasing us through the house, his chompers, his dragon mouth full of hypodermic needles, rapidly opening and closing and ready to kill. If we pick him up he makes sounds like the world's most terrifying gremlin. Not just any gremlin—the grand high gremlin. The gremlin boss. The gremlin other gremlins are afraid to reference by name.

This, we have learned, suggests it's time for Louie to go down for a two-hour nap.

"Oh, that just means he's cranky and needs some sleep," our dog trainer told us when she first witnessed the explosion.

So, baby monster now has to take a two-hour nap after one hour of being awake, all day, every day.

"We learned this early on," my friend Nina texted me last week of her own bernadoodle. "You absolutely cannot interrupt nap time with these kinds of dogs or you will suffer the wrath."

Even Duncan seems to understand the need for the routine. As soon as Louie starts growling at us, Duncan begins herding him toward a blanket.

We gave up on kennel training by the way. Fully quit trying. After having two puppies now, I have come to the conclusion that kennel training is a hoax created by China to distract us.

"Just let him cry it out," our trainer told us. "But if he starts thrashing against the kennel bars, let him out. It won't do him any good to traumatize him."

"Ok, but what if that's all he does every time we put him in there?"

I don't know that we got an answer to that.

Finally, on December 31, I quit everything.

"What are you doing?" Skylar asked me as I shoved the kennels and gates into our garage.

"I'm done. I don't give one single damn what this dog does to our house. Let him destroy it. I'm not living like this anymore."

Skylar shrugged. "Get ready to start cleaning up a lot of pee and poop."

Suddenly, miraculously, baby monster turned into baby angel. It's like he is allergic to rules and boundaries. Like he can't function in a system that won't just let him be.

He follows us around the house, politely sitting at our feet as we work or watch tv. He wrestles with Duncan when Duncan will permit it. He whines at the door to tell us when he needs to go out. And the moment the gremlin starts to emerge, he puts himself down for a nap, which nap we absolutely do not interrupt under any circumstances.

We are still a thousand miles away from being able to trust him to the level we trust Duncan. Once he whines at the door, we know we have 20 seconds to get him out before he pees. He still bites us if our hands get too close to his mouth. He'll gnaw on furniture if there aren't enough of the right toys near him.

But dear God, the last several days have shown us a light at the end of this miserable tunnel and we are reaching for it with all the hope we can muster.

This time in Strangerville, Eli is now a half-ass vegan, Meg's body is falling apart, and a woman recalls a moment when she realized her dad was the star of his own life. Story Christmas Dad, by Michelle Slater (music by Ketsa) Production by 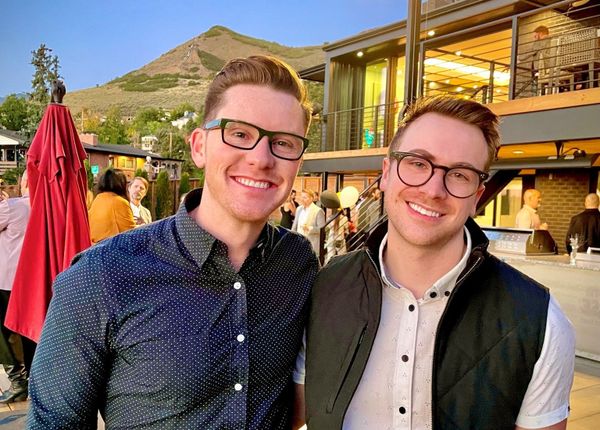 Our house is covered in pee. I know that's probably not literally true, but I still think it might be. As it turns out, 10-week old puppies are just constantly