Like every idiot who moves to California, I had not considered the fact that I would never be able to settle there. All that had mattered as a single 23-year-old was that I’d moved two miles from the beach. But I wasn’t 23 anymore.

I’d grown up with the naïve assumption my adult life would progress somewhat seamlessly from single, to married, to parent, to homeowner, to perfect suburban ever after. Having worried my way through singlehood and lucked into marriage, I’d become baby hungry enough to concede that once I got pregnant it would make sense to move back to Utah. We’d buy an affordable home with plenty of bedrooms, a covered garage, and a yard for the kids to play in.

We waited for a baby to push us back home, but the baby would not come. Our thirties began with virtually no change from our twenties. We did what we wanted whenever we wanted, wondering why it wasn’t as fun as it used to be.

When the baby really would not come, we started IVF. Two weeks later, our landlord sold the condo we’d been renting. We had four weeks to move out and two months left of IVF.

And so we were stuck temporarily in a place we would never be able to permanently live, waiting for the potential pregnancy that would make it make sense for us to finally move home.

It was not at all the seamless adulthood I had expected, but at least when I got to Utah, my $300k mini mansion would be waiting.

I searched “sublet in Orange County” on Craigslist and .000025 seconds later, the universe brought Chris and Karly into our life.

10 minutes from the beach! Heart of Costa Mesa!

They explained they’d bought a place and needed to vacate their apartment sooner than expected. We could take over their lease and soak up a few more days at the beach while finishing IVF.

Scott and I arrived for a tour of 1235 Darlington Place to find we were one of several candidates. Chris and Karly showed our group around the teeny kitchen adjacent to the poorly lit living room, gesturing vaguely at the miniature bedroom beyond.

They insisted on showing us the gym at the other end of the complex, despite the fact it was raining unusually hard for Newport Beach. They led our procession through a maze of open courtyards to a state of the art facility, where a dozen chiseled twenty-somethings were squatting. By the time we made our way back past the brand new pool, we could not have been more wet had we jumped into it.

We stood in their tile kitchen telling them how much we loved the place, our shower-wet hair dripping down our faces.

Before we even made it back to the car, I got a text from Karly: We really liked u guys! How soon could u get us a deposit?

They picked us because we looked the most like them. I don’t have proof of this, but I do know it. The four of us were millennials, which meant we were the same, which is why I felt so confused they’d been content to live in this shithole.

The shower was a freestanding tub with a curtain around it, its water temperature only either freezing or scalding. The electric stovetops were slanted. The bottoms of the kitchen drawers fell out. In millennial speak I knew it was #firstworldproblems but still—why would Karly and Chris put up with this?

Our arrangement was that each couple had half of their stuff in storage and half at 1235 Darlington Place, and I began using the differences between our material possessions as clues to work out where Chris and Karly had done right and Scott and I had gone wrong.

We’d been excited to roll out their big fluffy rug, only to find that within ten minutes it had made the whole place smell strongly of dog. Did dog people possess some quality that made them more capable of owning a home?

We suspected they hadn’t meant to leave their Ninja, but that didn’t stop me from using it and confirming that it was decidedly better than our Blendtec. They must have done their blender research, and thus were more thorough in life, which had allowed them to reach the homeowner phase of adulthood.

Every day I sat working from Karly's desk in the kitchen/living room, looking around wondering whether this spatula or that end table held their secret. I stalked them on Instagram but found private accounts. I looked them up on LinkedIn and they were nowhere to be found.

They were buying a place! They were supposed to possess bigger brains, or thicker wallets, or SOMETHING that made them more deserving of homeownership than us. I could not figure it out.

“They’re bodybuilders!” I hollered from Karly and Chris's bedroom. “Oh my gosh. Scott!” I ran into the living room and shoved my laptop in front of his face.

Two weeks into our stay, an email from Karly had finally provided some evidence. I zoomed in on her tiny Gmail photo, which showed an orange bikini-clad torso topped with a tiara and megawatt smile. The proof was undeniable. Somehow, he seemed unfazed.

“Scott,” I repeated. “They’re bodybuilders and they bought a place. How?!”

As it turned out, they were.

A few days later, Chris came to pick up their coffee table. Scott offered to help him carry it but he was like, “it’s cool man I got this,” power lifting it as his face turned purple and the muscles in his neck bulged. I felt happy for Chris getting to use his skills in real life.

One day Karly stopped by in yoga pants and a crop top and in spite of myself I hardcore checked out her abs.

At the end of the month, they came to pick up our rent check in a Hyundai wrapped with an advertisement for Sandals resort and I gathered they were vacation salesmen of some sort. Did physical prowess qualify you for an awesome home loan?

Chirs and Karly's bodies made them a living, meanwhile ours couldn’t make us a kid.

I spent my days driving to and from Irvine’s Reproductive Fertility Center: blood work, stirrups, ultrasound, repeat. After most appointments, I’d stop for a Sidecar donut as an emotional reward and immediately think, Karly would never eat this!

I went outside as often as I could. I took long walks to Castaway Park, drove to every beach along Pacific Coast Highway. I wondered—

Who could afford to renovate the charming old homes on 16th Street?

Who owned the mini Colonials that overlooked the back bay?

How had Karly and Chris made it so far in life without ever signing up for LinkedIn?!

Time flies when you’re getting shots in the butt, and before we knew it, it was time to leave sunny CA.

As Scott was packing up Chris's dresser one morning, he got a sock stuck in a back drawer. He pulled the sock free and a note came with it.

Scott read and handed it over without a word. Do you know what it said?

It said (in very manly all caps)—

GOOD MORNING DID U FLOSS?

I held it up by one corner, as though it was a piece of Karly's lingerie. And it might as well have been, because I had never read anything so intimate.

For the first time, I started to see Chris and Karly as peers. As I poured my cereal the next morning, I envisioned Chris waking up early to make prote shakes with the Ninja. I imagined Chris and Karly crashing on the couch weary from another day of Sandals sales as Scott and I waited in doctor’s offices for more bad news. As Scott filled another syringe with progesterone, I saw Chris slipping this love note under the bathroom door to make sure Karly got the kale out of her teeth before they went to the gym.

They were just a young couple supporting each other’s dreams, because after all, what is a bodybuilder without their sparkling smile?

I gazed woefully out the car window as we drove down PCH for what I knew would be one of the last times. We were headed to Chris and Karly's place to drop off our final rent check.

As we left the glitz of Newport for the quiet grunge of Huntington, jealous anticipation roiled inside me. Finally, I would see the place they’d bought. Finally, I would connect the dots between their furniture and ours, their jobs and ours; between home-wanters and homeowners.

Scott pulled down a dark sandy street, the oil refineries in view up the road. We approached a tiny gatehouse and buzzed their number. We entered, drove around until we found their address, and stopped breathing.

“Is this what you were expecting?” I asked him.

Chris and Karly's place was a trailer.

I want to be clear: it was a very nice trailer, with white shiplap siding and flower boxes in the windows, a trailer two minutes from the beach. But a trailer on the beach is still a home we never would have bought.

To assume every millennial but us was buying homes in Newport Beach? To be heartbroken we couldn’t live out our suburban dream in one of the most expensive zip codes in the nation?

We regained our composure just as Karly was jogging out to meet our car. I rolled down the window and handed her the check, thanking her again.

“Oh no, thank you guys!” she insisted. “We’re so glad we found you. Good luck with your move!”

As we drove away, I was surprised to feel closure. We were leaving California and it was okay. We were headed home, to settle.

You know how this story ends, don’t you?

There are KarlyChrises everywhere I turn, making me question my every life choice. They seem to have made it so effortlessly through the progression of adulthood. They seem to all have perfect teeth—teeth they don’t forget to floss.

And do you know what the weirdest part is? I feel less gutted than I should. Because by now I know life does not start when you buy a home.

I spent my twenties figuring out who I was while living in crappy LA apartments with moldy showers and no A/C. I spent my newlywed years romantically smashing silverfish with my husband’s flip flop. I found out I was pregnant while standing in the dingy living room of 1235 Darlington Place.

I desperately want the point of this story to be that home is wherever there’s someone to write you dentistry-themed love notes. I know that is true deep down, just like I know I’m lucky to have a place to live.

I still want a freaking house.

For an audio version of Rebbie's story, please check out this week's Strangerville. 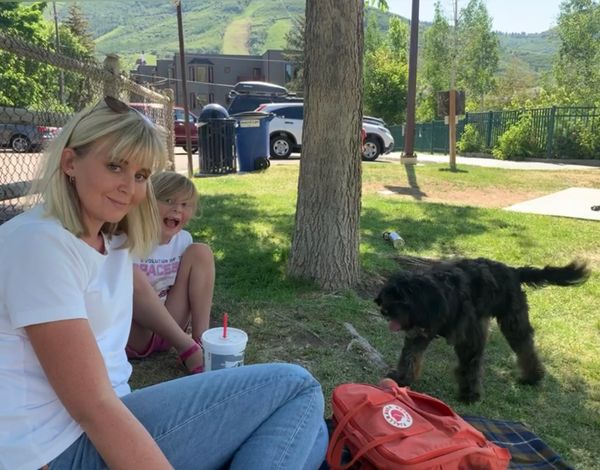 Salt Lake City has turned into the Jaws of Hell this summer and my Portland-born hippie helpmate is not having any of it. I really thought the winters would be

This time in Strangerville, we kind of believe in horoscopes, Meg flashed a bunch of strangers, and Rebbie tells the story of comparing herself to other millennials who all seemed to be buying homes and succeeding in their adulthood. Story Did You Floss? by