This piece was reader submitted by Jen Prinster; art by Christopher Patty.

Long before high-back booster seats with side impact protection, children were bouncing around in cars like pinball machines. Sprawled out across seats, playing drums on the front dash, hanging arms and legs outside the vehicle at all times. As recently as the 80s, my husband, being the youngest of six, recalls not even having a seat. He was just sort of thrown in the empty spaces like an old, beat-up duffel bag. What would now be considered negligence by every Tom, Dick, and Karen was the norm. Why?

Because we didn’t know any better.

Around the time my husband was on the final spin cycle in the back of his parents’ astro van, a Michigan representative introduced a bill that would levy a fine for not buckling up. The people were outraged. The people protested. The people made T-shirts. The people called him the new Hitler.

But lawmakers did not answer to the regulation-phobic or cower to the seat belt slashers. In 1984, New York became the first state to require the use of seat belts by law. As research continued and technology advanced, members of Congress realized they could potentially save thousands, if not millions, of people from injury or death by regulating safety standards in the auto industry.

They took a step. They made a change.

Is it worth the extra effort to wrestle your contortionist toddler into a rear-facing, five-point harness?

They are tiny humans with weak spinal columns, not inflatable sky dancers.

Never give up until they buckle up.

The list of safety regulations continues to grow. Car manufacturers continue to innovate. We do not throw our hands in the air and say, “There are already too many cars on the road. There is nothing to be done!”

We simply say, “This will be the new standard moving forward.”

Traffic fatalities were reduced. The car seat industry boomed. We got over our fear of seat belts.

I was 15 years old when I heard there would be new requirements for obtaining a driver’s license in Utah. The biggest change was 40 hours of parent-supervised driving practice during both day and night, with members of your immediate family being the sole permitted passengers for at least six months after becoming licensed.

Do you think I sat around wasting time complaining about how unfair this was and how much longer it was going to take me to get my license than it took my older siblings and how I wouldn’t even get to drive my friends anywhere for like six months so what was the point?

Yes. Yes, I did. Along with every parent who logged 40 hours from the passenger side of their white-knuckled ride.

Other standard requirements for licensure include a visit to the DMV where you pay a small fee; provide proof of identity, residency, and social security; complete a medical questionnaire; pass an eye exam and written test; and bring a guardian to sign for financial responsibility if you are under the age of 18. You must attend 18–27 hours of driver education classes, complete 6–12 hours of behind-the-wheel instruction and observation, and pass a driving skills test.

These requirements apply only to noncommercial motor vehicles. Any commercial vehicle or motorcycle requires its own special license.

You must renew your license every five years by completing an application and medical questionnaire, passing an eye exam, and paying a small fee. Your continued competence will determine licensure.

Or your grandkids may simply hide your keys. I really am sorry about that, Grandma.

You may be ticketed, have your license suspended or revoked, or even go to jail if you break the law while driving. If you fail to comply with these standard requirements, you do not get to drive.

Is it a lot of work just so we can drive ourselves to Taco Bell?

It’s a car, not a Little Tikes Cozy Coupe.

When lawmakers realized new drivers needed more than just a few loops around the Walmart parking lot before driving solo, we did not throw our hands in the air and say, “There are already too many drivers on the road. There is nothing to be done!”

We simply said, “This will be the new standard moving forward.”

There is no way to know how many lives have been saved because of anti-lock brakes, a backup camera, or a more experienced new driver.

Seat belts alone have been attributed to saving nearly 400,000 lives, and we continue taking steps forward to make our cars and roads even safer.

When you know better, you have a responsibility to do better.

If we do not look at gun ownership the same way we look at car ownership, we are fools.

It’s a firearm, not a Super Soaker Hydra blaster.

We are trapped in a society that hates change. We fight it. We complain about it. We spew hatred all over it. We make T-shirts about it. But eventually we accept it.

Educating and training potential gun owners and requiring background checks, medical questionnaires, renewal requirements, and license suspension or revocation for lawbreakers will not prevent all gun violence. But it is a step.

Gun owners’ lives will only be temporarily inconvenienced. Good guys with guns will receive more training. The people will still have their right to bear arms.

We have no way of knowing how many potential lives could be saved by creating reasonable requirements for obtaining a gun license.

Even if we only save one child from being gunned down in a classroom; one student from crouching in the blood of her best friend, terrified she may be next; one teacher from reliving the horror every time her eyes close; one mother from waking up to a silent house, with no breakfast to prepare, no lunch to pack, no pigtails to braid; one father from the endless torment of not being there to stop it.

A life is worth fighting for.

If an unborn fetus is worth fighting for, worth protecting, then so is that little girl in pigtails. The one who hurriedly hugged her dad before running out the door. The one with the oversized rainbow backpack and matching lunch box. The one with soft giggles and bright eyes. The one who danced down the hallway of her elementary school, hands intertwined with her friend’s. The one who high-fived her teacher on her way into class. The one who could not have known that a brief one-armed hug from the backseat at school drop-off would be the last embrace she would ever give her mom. The one whose absence will be felt every day, a gaping hole of grief and confusion.

We must not throw our hands up and say, “There are already too many gun owners. There is nothing to be done.”

We will simply say, “This is the new standard moving forward.”

Do not answer to those who fight against change.

Do not cower to the guy who wants guns but is unwilling to take basic steps to obtain one.

It is our children you must answer to.

This time in Strangerville, Eli's puppy remains a terrorist, Meg went to a political debate, and a woman has a problem at a pizza restaurant. Story Bathroom Door, by Lisa Turley Smith Production by Eli McCann & Meg Walter Join our Patreon! 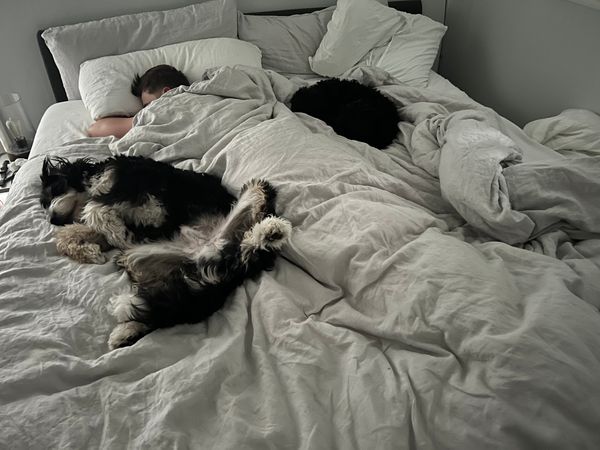 A wet nose pressed into my neck. A moment later I felt the shove of four dog legs against my exhausted body. I inched closer to the edge of the