I was at the gym around noon today when I saw Skylar wander in, whistling, and carrying a GIANT jug with him. He doesn't normally go to the same gym as me. Mine is just next to my office—it's convenient. He goes to Planet Fitness near our house. If you ever ask him why he goes to Planet Fitness, he will tell you, in a voice that is much louder than necessary, "BECAUSE IT'S A JUDGMENT FREE ZONE."

For a long time I didn't understand why he would always say that. Did he get judged somewhere in some way once? Did he flee to Planet Fitness for refuge from the critical eyes of ripped mankind?

Then a couple of years ago I went to Planet Fitness with him and noticed a sign at the door that said "JUDGMENT FREE ZONE."

That gym was built for my husband.

And although he loves it, every once in a while he likes to come to my gym, which he "hates," but he goes to my gym anyway because he says he "misses" me. That sounds nice and all, but I suspect his going there has little to do with me and much more to do with the fact that my gym is in a mall that has a Nordstrom and a J.Crew.

The giant water jug he was carrying when he walked in today has consumed a lot of our time in the last year. He bought one of these during Unprecedented Times. But really, the verb "bought" doesn't do justice to the amount of energy he put into that purchase.

There were hour-long research sessions on many occasions that went into finding the "right jug." He read every review that has ever been written on the internet about any drink apparatus. This man set up phone calls with people he knew who had bought a water jug sometime in their life to get their opinions.

I had to make a new house rule that he wasn't allowed to talk to me about this anymore because I couldn't bear the thought that two grown and very busy men were both spending time on something this, and I'm just going to say it, STUPID.

The water jug came. It was paraded through the house with a level of reverence I've only ever seen at royal induction ceremonies. I was honestly not sure if I was supposed to bow and start paying taxes to it.

And then, he promptly lost it.

I don't know how he lost it, exactly. This jug was so large you could see it from space.

But he lost it. So he bought another.

And this time, he surgically attached a GPS tracking device to it.

To a water bottle.

That you can see from space.

I watched this man use power tools for this.

Two weeks later he lost that GPS tracking device somehow. No. Read that again. He lost the GPS TRACKING DEVICE.

So he attached a new one to the jug and this process took an afternoon. There were injuries

And after all that effort, just a month or two later, he decided that this giant jug was not the exact right giant jug because it didn't quite fit in the cup holder in his car.

I knew something was up when he came to me with an offer. "I've seen you eying my water jug. Why don't you just go ahead and have it. It's yours."

He then admitted that he had grown sour on this thing and wanted to buy a new one and reader, when I tell you that I almost exchanged this man for a new man in that moment you need to believe me.

Fortunately this time he already had the new one picked out, which he promptly ordered but he accidentally sent it to the wrong house in the wrong state or the company went out of business or there were supply chain issues or the ILLUMINATI got involved. I still don't know. But whatever happened, it delayed the shipping of this thing several weeks so by the time it arrived at our house, it was ushered in like a soldier who had returned from war after the army people had already shown up to the house to tell the family their son was lost at sea.

So it was that water jug—the new one—the supposedly "perfect [several heart emojis]" jug that he was carrying into the actual gym with him, whistling, a bounce in his step, today around noon.

I watched him glide past several rows of treadmills, walking like Mickey Mouse in the old Mickey Mouse cartoons.

I shook my head.

This wasn't a judgment free zone.

This time in Strangerville, are Meg and Eli too anxious to raise children, a story about an earthquake, and a discussion about what happens to your body when you turn 35. Story Earthquake Drill, by Eli McCann Production by Eli McCann & Meg Walter 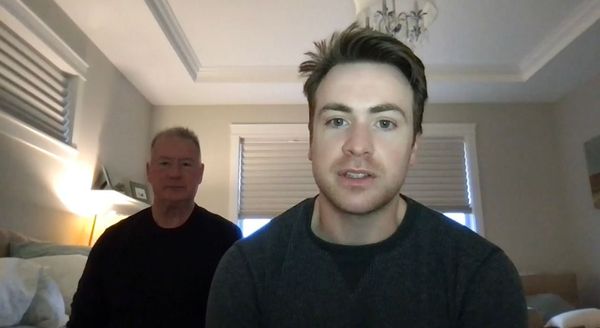