As I examined the portrait of my murder I reflected on my life choices and tried to pinpoint the exact moment when things started to turn. It must have been, I determined, when I had accepted the position of forum moderator of the Quit Smoking Message Board.

As its name implies, the Quit Smoking Message Board, or the QSMB as its members call it, is an online community comprised of smokers who are trying to quit and ex-smokers who have successfully quit and want to help others succeed- but mostly smokers who have replaced their nicotine addiction with an addiction to the internet.

I had never spent time on any forum and had no understanding of what was required of a forum moderator. And I had never smoked a single cigarette. I was more qualified to play in the NFL than I was to moderate the QSMB, and I’ve never touched a football. I only agreed to the job after my boss assured me it would require a minimal commitment. My occupation, as it was explained to me, was just to make sure forum members behaved themselves. “The members are adults and shouldn’t require too much babysitting,” my boss said. I look back on that statement now and laugh.

Most forum members I came across during my 2 year term as moderator were nice, respectful, decent people. But those were not the people who needed moderation. It was the vulgar, narcissistic, misogynistic, and sometimes violent users, made all the more vulgar, narcissistic, misogynistic, and violent by the difficult process of giving up cigarettes that put my skills to the test. And because my skills in this particular industry were limited, if not completely nonexistent, it was a test I failed every time.

There were a number of things that prevented me from excelling in the field of virtually managing other humans. Not least among them was my lack of training and experience, but probably greatest among them was my desire to be liked. Actually, it’s not a desire so much as a need, and not so much a need as the driving force of my existence and the very motivation behind everything I do. The faintest whiff of someone’s dislike or even apathy toward me triggers my primal instinct to seek validation and I have been known to go to alarming lengths to get it.

So when a few days into my new post I received multiple emails from a user named cheeselover22–emails that were misspelled, incoherent ramblings of a mad woman who blamed me for ruining the forum, her life, and civilization writ large–instead of ignoring the emails and removing cheeselover22 from the forum like any level-headed person would, I engaged in an effort to win her over.

The more I responded, however, the more cheeselover22 seemed to dislike me, a dislike she made no effort to hide in her daily emails, and a dislike she had no problem proclaiming to a forum of thousands. Every day I tried to treat her like a friend and every day I was devastated as her hatred for me grew. On a day when the site’s server crashed, cheeselover22 wrote, “I think Meg wanted a day off today so she shut the place down. Let’s all get in lots of fights today to make her job harder.” Encouraging other members to misbehave was a very clear violation of the forum rules, so I had no choice but to give cheeselover22 a week time out.

During cheeselover22’s 7-day ban she sent me an email every morning and every night. “I will not be a target or scrapegoat,” yes, scrapegoat, “for the stuff you condone,” one email read. “I refused to be a sheep and parrot the herd,” stated another.

During this trying week my masochistic tendencies got the better of me and I decided to find cheeselover22 on Facebook using what little personal details I knew about her. A quick glance at her profile revealed six months worth of posts about Meg, the evil QSMB moderator. Every post was accompanied by a handful of sympathetic comments from her friends. “Meg the moderator sounds terrible!” wrote one friend. “What a bitch!” wrote another. Cheeselover22 had posted that very day and her status update read, “I know for months I've been harping about the site where I've been for almost 4 yrs but I need to walk away cause nothing will improve there not with a mod who sees being a moderator as a paid job.”

I prayed that she would actually walk away, but her threat was empty and my hope was in vain. Cheeselover22 returned to the forum the minute her ban was lifted, and continued emailing lists of the many ways in which I had failed her every day for the 2 years I moderated.

While cheeselover22 was certainly my most outspoken critic, she was far from being the only forum member who managed to make my life nothing short of a living hell. Other problem participants included:

I was annoyed that these forum members, averaging 50 years old, couldn’t act even half their age. I was confused by the lack of discussions pertaining to smoking cessation and the abundance of spirited discussions about anything and everything else. But if I’m being completely honest, I was the slightest bit entertained and amused by these people who seemed to have such a knack for making any situation dramatic.

The amusement vanished, however, and was entirely replaced by fear as soon as Jimmy Kool Pantz joined the forum. That’s Jimmy Kool Pantz cool with a K, pants with a Z. Jimmy, or JKP as he called himself, was hostile, obscene and borderline abusive right out the gate. After JKP was reported for badgering another user, I issued a warning. In response he posted an image of my head pasted on Hitler’s body.

I issued another warning, and JKP struck back again, this time with obscenities and threats. So I banned JKP completely. And things were okay for a minute. But then I checked my email and found a message from a concerned forum member.  “Have you seen this?”  they asked, and in the body of the email was the portrait of my murder, an artistic rendering of my death as imagined by JKP. It’s a comic strip with two boxes. The first box contained two stick figures, one in a green dress, the other in dark clothes and a dark hat. Green dress was labeled “Meg”, and dark hat was labeled “Jimmy Kool Pantz.” A dialog caption attached to Jimmy Kool Pantz reads, “Why did you ban me,” and the caption next to me read, “Sorry but you broke the rules.” The second box of the comic contained the same two figures but this time I had a red explosion emerging from the back of my head and JKP was holding a smoking gun. The word “BANG” with an exclamation point was scribbled above our heads.

Trying to conceal my panic, I asked the sender where this image originated. The user directed me to a site that was made to look just like the Quit Smoking Message Board. The titles of all seventy plus posts on the site included my name. “Tell us how you really feel about Meg” was the title of one, and every post in the thread contained a cartoon with me as the subject, each picture more terrifying than the one before. “Slut! Ego Tripping Nazi!” Read the captions under one drawing of a woman labeled “Meg”.

When JKP wasn’t posting images, which he seemed to be doing as a full-time job, he was posting text threads. “Anyone know where Meg lives? Anyone know her personal email address? I would like to contact her to say hi,” he wrote. “I’m not sure what is uglier, her looks on the outside or her personality on the inside,” he added. “In my book she is a stupid ass bitch that needs to stay off the internet” and, “she needs to stop smoking crack.”

It was when I read that last little slice of libel that I decided to quit. Not because I thought JKP would ever actually find me or do any harm. But because he and others like him, knowing nothing but my first name and my job, assumed I was an ugly, egotistic, crack-addicted dictator. And so long as I continued working as the QSMB moderator, new people would find reasons not to like me.  In fact, other users had already begun joining JKP’s board and voicing their agreements that yes, I was Satan, and yes, they should find my personal address and pay me a visit, and yes, I deserved to die. These people were never going to like me.

After my final two weeks were up, I announced my departure on the forum, and was pleasantly surprised at the number of users who expressed sadness to see me go and appreciation for the work I had done.

One user on my final day posted a thread titled “Megheart.” Attached was an image. My head, this time photoshopped onto Mel Gibson’s body in a still from Braveheart. I am William Wallace, with my swollen, muscular arm hoisting my sword in the air, an army of Scots behind me.

So while my time as a forum moderator was by all accounts an unmitigated disaster, in the end at least one user liked me enough to liken me to the hero of the Scottish revolution as played by a now disgraced anti-semitic Australian actor.

For an audio version of this piece:

This time in Strangerville, Meg is moving away from Eli, waterbeds are birth control, and Eli tells the story of working for the Palauan judiciary. Story Footprints, by Eli McCann (music by Squire Tuck [https://freemusicarchive.org/music/Squire_Tuck/2015021152908025/Ukulele_Blues]) https: 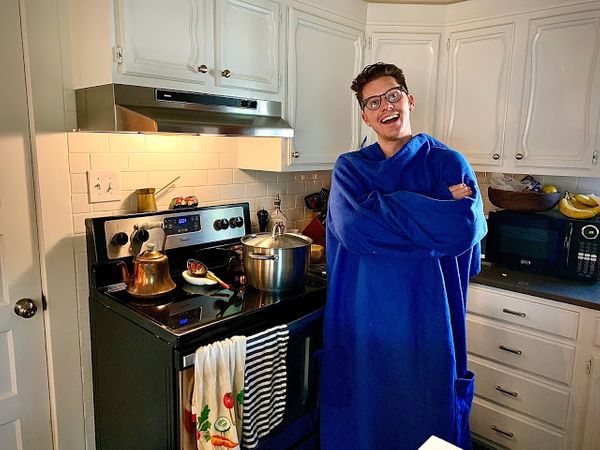 Last week I tweeted this thing that went viral: > For my second date with my husband we met in NYC and went to a party and ended up at a