This time in Strangerville, Meg is going to Alphacon!!! Eli spent a few days with a stranger in Bosnia. A woman recounts an experience watching a recording of Fleetwood Mac as a child. And we want Blockbuster to come back.

No one told me how awful love was. My parents never really explained that it could paralyze you.

Nazareth told me Love Hurts, J. Giels Band tried to warn me that Love Stinks, but I ignored all of the signs and had to figure it out on my own, the hard way. I was fortunate enough to have a slight glimpse at the fact when I was forced to view a recording of Fleetwood Mac’s reunion concert, formally titled The Dance, when I was ten.

My mom, Marian, had this thing with recording any concert on television she could, and then routinely play them on weekend mornings when she cleaned the house. I knew all of the lyrics to Honky-Tonk Woman when I was five because of a Rolling Stones concert she taped (where they performed with blow up dolls, I might add) and upon my suggestions we had a few Garth Brooks concerts as well. I didn’t know who Fleetwood Mac was. I honestly didn’t know a single song or any of their controversial history. Over time I was able to pick up the songs and recognize them before I groggily dragged myself out of bed at ten a.m.

Rhiannon was a staple because Marian liked the name, Say That You Love Me had some fun humming in the background and Don’t Stop was so obnoxiously repetitive I seriously considered throwing that tape out of the window on multiple occasions.

On this Saturday morning I had made it into the kitchen before Marian had hit play. She was standing at her perch, nestled in the corner sucking on her Virginia Slim 120 menthol light so that the smoke blew out the window. She was dressed in her weekend uniform of men’s Levi 501’s, and a Harley Davidson t-shirt that with cut off sleeves that complimented her blond semi-mullet. I in turn hadn’t been as productive and was still in my pajamas, which consisted of an oversized Mountain Fuel Supply Company t-shirt from my father’s closet, mis-matched socks, and bedhead of the finest degree. She bid me good morning as I reached into the cupboard, which was directly in her eyeline from where she stood, to grab a bowl. I poured myself some Golden Grahams and took my notable spot, on the counter on the opposite side of the sink, my back up against the microwave. This was where we had some of our best talks, my feet inside the sink. We talked about everything and it was good when we weren’t fighting

Marian and I are a lot alike and when you get two strong personalities that is either a recipe for a great time or a recipe for disaster. She was set in her ways and I learned from a young age, so was I. We would bicker; she would nit-pick, and I would cop an attitude. This cycle repeated until she finally told me to go to my room because of course she had the upper hand. I would comply as the child, however not without muttering a few expletives under my breath that I did indeed learn from her. That was my way of having the “final word.” Regardless of our differing personalities there were times when the relationship was quite pleasant. She was someone I knew I could be open and honest with even from a young age, and I could always count on her passion for rock and roll.

She taught me about The Moody Blues and REO Speedwagon—she had so many mix tapes made by bikers she had met that I was able to become fluent in Cheap Trick before middle school. I once came home from school early after a fire alarm went off to find her on her hands and knees scouring the kitchen floor to the Carpenters.

This was my mom.

After I’d replaced my feet in the sink with my cereal bowl, I wandered out onto the couch to inevitably wait for the Fleetwood Mac tape to begin to play. I wrapped myself in this threadbare multi-colored afghan that I loved dearly, and I would just sit there lazy while Marian did all the work.

She came out, cigarette still in mouth and hit play on the VCR. I rarely woke up before it started so I decided to lay my head back and let it all soak in. I thought maybe this could be an education and I could finally put faces to voices that I’d been hearing muffled in my bedroom for the past several weeks. I watched the familiar songs and thought Christine McVie was stunning. I remember hearing Landslide for the first time and thinking how hauntingly beautiful Stevie Nicks sounded, almost groaning out those final verses.

But it wasn’t until the song Silver Springs began that I actively sat up from my horizontal position and focused.

I don’t know what possessed me besides the fact that Marian had stopped dusting and I noticed her eyes fixed on the screen as well. Stevie sang. The lyrics were beautiful and personal, and I was ten and had no idea what they were talking about.

Time casts it’s spell on you and you won’t forget me. I know I could have loved you, but you would not let me.

Okay, so that sucks for Stevie, but she was pretty, she had options, right? After an incredibly long guitar solo, Nicks started up again and turned her gaze straight to the curly haired guitar player I now know as Lindsey Buckingham . . . and she growled. She actually growled at him as she sang these words, over and over.

He looked at her and almost growled back.

I couldn’t look away, the tension was so strong. It was as if I was directly in the middle of their fight and I wasn’t allowed to leave, in the same way as when someone in your family starts talking politics at Thanksgiving and no one is allowed to leave the table until your uncle calms down.

I didn’t want to feel that way. I didn’t want to get the look that Stevie gave Lindsey. I knew it meant trouble, even then. It was heartbreaking to watch and I still had no idea of their history. I just know that something traumatizing happened and they were forced to sing about it.

I’ll follow you down ‘til the sound of my voice will haunt you. You’ll never get away form the sound of the woman that loves you.

I still get chills when I watch that video, though now it’s a lot more accessible thanks to YouTube. You can’t help but notice the intensity and it’s impossible to not feel uncomfortable, but you absolutely cannot look away. Now that I’m older and have experienced my own broken heart many times over, it all makes so much more sense. I’ve looked at someone that way and I’ve even had someone growl back at me.

I’ve listened to that song on repeat when in the middle of figuring out my feelings for people and I forced my younger sister Kennedy to listen to Rumors with the Silver Springs B-side when she went through her own struggles. Kennedy also serenaded an empty karaoke bar with her own rendition of the song that brought her to her knees in sadness and my lighter to my hand in unity.

I don’t know what my life would be like without those pained glances and angry words between me and whomever I’m involved with. It may be gut-wrenching, but it also has a sort of beauty to it. When you love someone so strongly that it actually hurts you physically to be in the same room as them, that is amazing.

It may not feel that way at the time, but to have that knowledge—that I loved that deeply—I feel privileged.

If Stevie and Lindsey (and pretty much the rest of the band) can survive a reunion tour and perform songs literally written about their entire romance and escape with only a few scathing looks, I can probably survive being dumped and possibly only having to face the person again if we run into each other at the grocery store.

It’s easy to say that Fleetwood Mac is a love story on its own, but on that particular Saturday, and with many viewings after, THAT is where I learned that love is horrible and awful and that it’s not worth putting in the effort for it.

That is, until I fall in love again next time.

In this emergency episode, Meg gives us an update on the amazing things that happened to her at Alphacon. If you don't know what that is, go listen to Episode 194 where she talks about what it is and why she was planning to 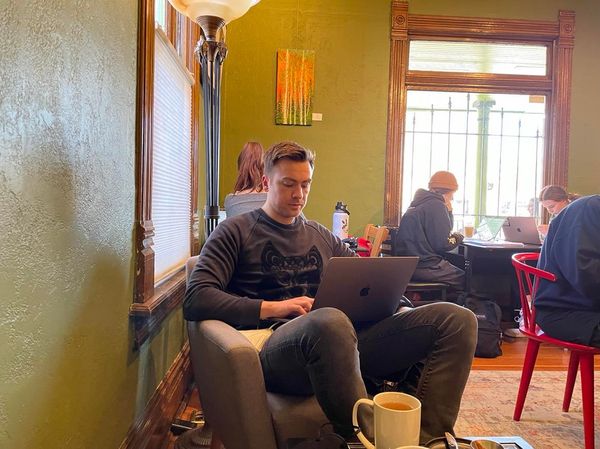 "I'm the new Erin Brockovich." Skylar whispered that to me just now. He's sitting across from me at a tea shop near our house where we like to go on