Thanksgiving has now passed. And what a week it was. I always love Thanksgiving week in my family, partly because it's one of the few constant things in my life that I can count on. There

will always be a discussion about whether or not we actually stole the chairs in my parents garage from the church which we are now hauling to wherever it is we're having Thanksgiving this year. There will always be the "Thanksgiving beans" sitting on each plate before dinner starts so everyone can go around the table and name something they're thankful for. Mom will always cry and say she's thankful for dad when it gets to her turn, which is always very sweet. There will always be screaming children terrorizing everyone else the entire day (in the eighties these were my cousins. Now they are nieces and nephews). And there will always be an incredibly long prayer to bless the food, which is always disrupted by an incredibly awkward moment; two years ago it was Uncle Rick praying that a couple members in the family would just find spouses already, and as if that wasn't awkward enough, he got one of the people mixed up and prayed for my already married sister. This year it was my two year old niece, like a broken record, saying over and over again "I need go potty. I need go potty. I need go potty," confirming once again that I am simply too immature to maintain composure when bodily humor is placed in front of me, even in the most serious situations.

A couple of days after Thanksgiving, Krishelle and I decided to help our parents put up some Christmas decorations which made my mother overly excited. After fanning out the branches of the various wreaths and trees strategically placed around the house, I felt something come over my head and then realized that it was a Santa hat, disturbingly decorated with reindeer antlers. I walked into the next room and found that Krishelle had been assaulted with antlers of her own. Mom was running around the house singing every Christmas tune she's ever heard of (including a few that I'm positive she made up) while dad fiddled with the lights stating no less than fifty times that he hated those "stupid things."

As always, the decorations miraculously turned, from what always looks like a severe case of hoarding while still in the storage room, into an immaculate display of festive cheer. It's a talent that mom has always had.

I'm looking forward to Christmas now, so much so that I secretly longed for snow the other day for about twelve seconds. But don't tell anyone. 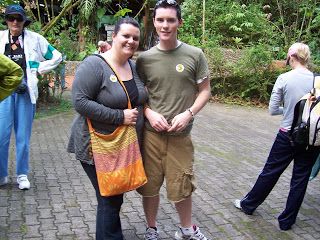 Well I'm finally prepared to start writing about our adventures of last weekend. Krishelle casually mentioned on Thursday that Uncle Will wanted to go to Costa Rica and had found

I have stepped away from the blog for way too long and it is already time for Thanksgiving so I thought it would be appropriate to write about two of the things that I am currently thankful for and if I'm feeling ambitious, I