It's time we talk about email forwards.  My relationship with any of you who may have sent me any of the following forwards will likely be awkward for a little while.  Nothing we can't overcome I'm sure.

Over the past 40 years or so of my life (give or take about 15), I have received email forwards of many kinds which have intrigued, manipulated, and irritated me to no end.  Here I present the various types and what to look out for:

These, I think, start somewhere in the south.  They are usually created by the same people that walked across the Bible belt throughout 2008 chanting some cute slogan using words that rhyme with "Huckabee."  They come in two main types.  The first (and possibly the most annoying) are an almost endless string of sayings in size 200 font separated by the cheesiest computer graphics you've seen since computers began.  So that you'll recognize these emails quickly, one of the first quotes is usually either "every time a leaf falls, an angel is hugging the Earth" or "a sunset is just God's way of sayin' 'so long'!"  Because of the length of these emails, it takes several minutes for them to load all the way.

The second type of MRFs have a looooooooooooooong story about some child who watered a plant every day because the Bible said we should respect all living creatures; then at the end the plant inevitably saves his life and as one friend tells the boy how lucky he was, the boy says back "yeah . . . luck" as he swears he sees a cloud in the heavens wink at him.

The reason MRF's are manipulative has to do with the way they end; they usually say something like "funny how most of you will forward funny emails but you'll think twice before sending one about God!"  The really blunt ones might actually tell you the heavens weep when you delete their emails (as if heaven doesn't have better computer graphics than presented in the MRF's).  To the untrained mind, these statements may be enough to get you to send the emails on, fully believing that this is the ultimate test of faith, and pressing that delete button will be counted against you at the judgment day.  I on the other hand am ashamed to forward these on; but it has nothing to do with my belief in God.

MPF's are similar to MRF's.  Every once in a while these are somewhat pleasant.  Often they seem completely fabricated.  And their hidden purpose is usually to show why one political party hates soldiers.  Either way, I steer clear of people who make their political choices and major life decisions off of what they've read in these emails.

The manipulation section is similar to the one found in the MRF's except it will say something like, "the soldiers have the courage to fight for you every day and some of you won't even have the courage to send this to your friends."  And so some of us will forward it even though much of it seems packed with lies and one-sided rhetoric in some vein hope that this will somehow be the equivalent to serving in the military for a couple of years.

These always come from the friends that would never tell me an inappropriate joke in person; so I end up reading far into the email sometimes before I realize that it is, in fact, an IHF.  I usually just delete these and then spend the rest of the day wondering if that friend sent me the forward on accident.

These are often touted as my favorites.  They usually have some completely fabricated story about a time when justice wasn't served followed by a plea to email-sign a petition.  I say "email-sign" because instead of actually signing something, you are asked to type your name at the end of a long list and then send it out to every Cindy Lou and Mary Beth you know so they may do the same.  I've often wondered how they would go about collecting these in the end.  In brief, it may look like this:

Mur Derousthief was caught in 1992 murdering an entire town of 3,000 in Iowa after plotting the entire thing for over a decade in his basement.  He killed everyone in the whole town so now, after only a few short years in prison, the judge decided to set him free because there is noone left from the town to prosecute him and the judge ordered [a city near you] to give him a $300k home and a large stipend each month unless 10,000 people sign this email petition.  Before you delete this email, you should know that one person managed to get some of the killings on tape . . . and he was laughing the whole time!  And now he's in charge of Disneyland!!!

Then you have to scroll down the page for about 12 minutes to get to the bottom to find out if the friend who sent it to you actually email-signed the thing before sending it on.  I'm always amused when the friend hasn't signed; it's as though they see that the entire thing is completely implausible, but they want to send it out to others just in case.

The other OPF's can be grouped with the MRF's because they're all about churches' freedom of religion.  These will usually have some story about how a certain senator is moments from getting some piece of legislation passed that will forbid anyone from believing in God unless we can get x number of signatures on this petition.  And this seems perfectly reasonable because we've seen thousands of bills that we've never heard of, but undoubtedly would completely turn the country upside down, stopped in their tracks when some techie in Washington rushed into congress with a thousand pages he printed off from the petition email he just received.  Right?  Wrong:(

Pleeeeeeeeeeeeeeeeeeeeaaaaaaaaaaaaaaaaase stop sending me these!  If you love sending me forwards that's fine but I can't do the TGF's anymore!  I never know they are TGF's until it's too late because the subject usually just says something like "interesting pictures" or "must see" and for all I know I'm about to stumble across some neat shots of deep sea creatures having a picnic together.  Instead I'm unexpectedly bombarded with the most horrific pictures of some bear attack in Wyoming that tore an entire family reunion apart, cheesy matching t-shirts and all.  I usually spend the rest of the day curled up in the corner crying (as if I needed anything else to be terrified of) after exposure to the TGF's.

I'm hoping we all have a better idea of what to look out for.  The Internet is a scary world; and one day those that started the forwards will have to answer for their actions.  They'll probably do it in an email.

Hallucinations: Does anyone know much about these? I'm pretty sure I had a severe hallucination yesterday; my first in fact.  My friends will argue that this was at least my second ever since I saw a little boy disappear out of thin air at 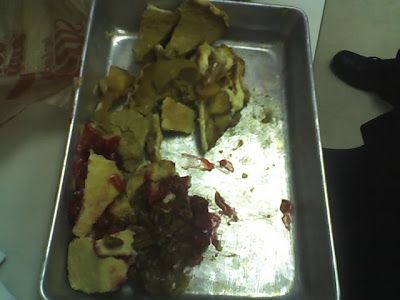 One funny story for you all . . . There is a woman who comes to the bank frequently (at least twice a week). She's about 70 years old and no taller than