Made it home. If this was a cheesy church video from the early '90's I would say something here like, "it's funny, I just got home but I sort of feel more like I just left it" as I look out the window into the rain, clearly thinking about all the good times in Russia. But the truth is, it's very sad to be back already. Of course it's great to see the family again but the return feels so premature.

This last week was an adventure for sure. One which I'll be recovering from for a while but one which I would live again in a heartbeat. Uncle Will, Krishelle, my two cousins Megan and Matthew, and two close friends of ours (through Uncle Will) Andrea and Stacee, all made the mass trek to the other side of the world to meet me in Moscow about nine days ago. We hit three cities in two countries over the next week and had the time of our lives. I'll drop some pictures on the blog later (when I collect them from the others; again--too lazy to take my own) but for now I'll just give the super short update.

Moscow was great; the group was basically functioning on adrenaline the entire time as they were severely jet-lagged but not allowed to sleep since we only had about a day and a half there and three weeks of stuff to see. It was Russia Day which complicated things greatly, leaving Red Square and the Kremlin closed the entire time they were there. Nonetheless, we were able to see a lot of amazing things and walk all around the outside of Red Square and the Kremlin before flying out to L'viv on Saturday morning from the very small and strange Vnukova airport in Moscow where one woman jumped over about twelve stations to target Andrea and ask her whether she had any eggs or cold-cuts in her bag, which we thought was odd of course.

L'viv Ukraine was fantastic! We were there for about three days and loved every minute of it. I forgot how much I love that city. I could walk up and down the old gorgeous cobble-stone streets all day. The town is completely quaint and friendly and I immediately felt at home there just as much as when I lived there for nine months five years ago. The best part of it all was getting to see and spend some time with some of my long lost friends there who I have missed every single day for the last five years. The reunion was sweet and our little farewell at the train station on our last night where several of the members came to see us off was really hard. Everybody there was pretty emotional including my entire travel group of friends and family who had just met all of these people last week.

After a long night on the train we made it to Kyiv. Everyone was getting pretty burned out by this time but we were still able to cram quite a bit in to our last couple of days there. Kyiv was gorgeous as always (in its own way) and I was able to see a few friends there as well.

The group left on Friday, a day before me, so I was able to get out and do some exploring and hang out with some friends there as well. Friday night I somehow ended up getting a really strange Thai massage from some Thai lady who only knew two English phrases that usually came in order after I answered a tearful "yes" to the first one: "You pain?" and "RELAX!!!"

The 24 hours of flying home and layovers yesterday just about did me in. A baby just the row in front of me screamed the entire nine hours of the flight from Germany to Chicago. You can only imagine how excited I was to find out that that same baby would be sitting next to me on my flight from Chicago to Salt Lake as well. But if the baby didn't stop me from catching some shut-eye on the last flight, the crazy retired extremely talkative cop sitting on the other side of me would have. He, as often happens, immediately told me everything he knows about court as soon as he found out I'm in law school, telling me no less than 30 times that I'm obviously not getting a good education because I didn't have the same list of court-room etiquette checkpoints he was taught in the academy in 1953. On a side note, this sort of thing frequently happens. About twice a month I will run into someone who finds out I'm in law school and that person will immediately remember some tiny very specific list of something law related that they learned in business law 101 freshmen year of college at Shequera Community College and the following conversation will take place:

Annoying: Oh, you're in law school?!

Annoying:Ok, so then you know the five things that a witness should always know.

Annoying: What are they?

Me: I don't know what you're talking about.

Annoying: (Lists the five things out in explicit detail; none of them are predicable in any way but all of them are common sense and usually just the same thing repeated five different ways like "first, never lie. Second, don't give too much information. Third, think before you speak so you don't tell too much. Forth, tell the whole story but not more than you need to. Fifth, tell the truth).

Annoying: I can't believe you've made it this far in law school and they haven't even taught you that yet.

Me: Well there is a lot to learn.

Annoying: Yeah but this is pretty basic. I don't know how you could ever be a good lawyer without knowing that.

Me: (I attempt to explain that that specific list of things in that particular order is not some kind of standard by which all attorneys must measure themselves and the whole list is completely common sense anyway).

Annoying: It may seem like common sense but you didn't know it.

Me: Yes, I had no idea that a witness should tell the truth from the stand and try to get their story out. I wish we had spent a whole semester talking about that rather than contracts so I would be so much more prepared to have this ridiculous conversation with you.

Eventually the old cop changed the subject and decided that the middle of the night on a plane when I hadn't slept for over 24 hours (and I made sure he knew this by the way) was as good a time as any to lecture me for two hours about why all homosexuals are going straight to hell and deserve to be put in prison for the rest of their lives. I, quite cranky by this point, didn't think it was the best time for me to explain to him all the ways I disagreed with just about everything he had to say. So I just rolled my eyes and turned to the window to try to catch some sleep. Which didn't work well as he still wanted to tell me all the reasons I'll never be a real man if I don't serve in the army for a while.

I'm pretty jet-lagged now so I think I'll try to jump back into bed.  I hope everyone is doing well!

I finally moved today. Life has been a bit hectic since getting back from Moscow. Amid all the stresses of getting back to normal life, starting a new (and utterly confusing) job and moving, I’m also in recovery from some kind of sickness 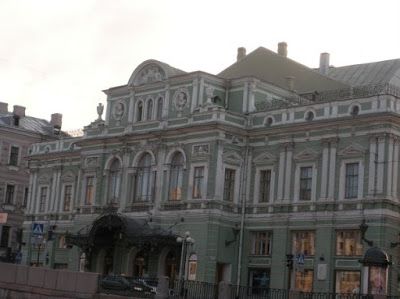 On Monday at lunch the following conversation took place between Kimberly and myself: Eli: Darn, it's too bad I never made it to St. Petersburg. Kimberly: Shoot. That is too