Last week I had an appointment to go back to the hand surgeon to find out whether I'll ever be a hand model again. This appointment was to begin at 7:30AM. Naturally, I slept through the violent vibrations and honking of my phone's alarm until exactly 7:27. By 7:28 I had pulled on warm clothes and was making a mad-dash out the front door while screaming a few Mormon censored obscenities (wink wink). Unfortunately I had a text book that I needed to run to a friend before my appointment. At 7:29 I pulled up to the building she was in, ran in, threw the book at her and got back into my car (which was rolling backwards when I came back outside) and pulled away while my phone still said 7:29. Fortunately on my way to the clinic I hit only green, yellow, and recently yellow lights so I didn't have to stop (no worries--I checked the news that night and made sure there were no pedestrian hit-and-runs in Provo that day). Made it to the clinic and ran up the stairs and down the hall and to the receptionist. I pulled my phone out to check the time and I could not believe it. It was 7:32. I'm actually very serious. No exaggeration this time. I somehow made it to my appointment exactly five minutes after waking up in bed AND managed to run an errand on the way. I don't know how this happened and I don't know whether I'll ever be able to recreate it. But it turns out that when I'm in an absolute daze and a really big hurry, I can get a whole lot done in very little time. It is for this reason that I wish dazed-and-confused-Eli would teach a whole series of lessons to alert-and-ridiculously-distracted-daytime-Eli who spent 14 hours at school today but feels like he accomplished about 4 hours of work.

And by way of update: I seem to be getting healthy again despite the terrifying polluted air conditions that my apathetic friends don't seem to be taking nearly as seriously as they should. I've felt like Noah for much of this week, warning the world about the dangers of breathing air you can actually taste (and the taste is shockingly not that good. Sort of tastes like a running car that drove into Utah Lake).

Well I'm off to bed--big day tomorrow: we have our first full run-through of our trial advocacy case in front of a couple of federal court judges at a court in Salt Lake. This is for a competition in DC next week that I'll be going to if I don't die of black lung first. Fingers crossed. 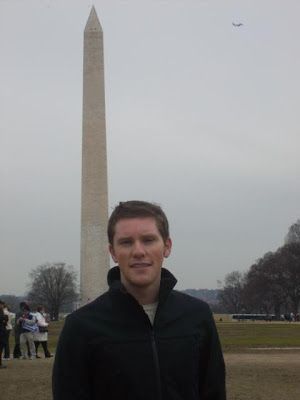 Just thought I would shoot out an update about this weekend's adventures. I travelled with a group of classmates out to Washington DC for a trial advocacy competition. This would

It's that time of year again when I really start thinking about what's happened in the last 12 months. How have I changed? What has made this year different? Was this year my best yet, as it always should be? 2009 was a hard