Here I sit on my bed having just eaten a giant bowl of blueberries (I didn't realize I had a huge bag of blueberries until today and now I'm frantically engaging in my pre-move tradition of masticating every bit of food in my possession in my final hours of current-residence so as not to let anything go to waste when I cram 26 years of life into my tiny car and haul it, once again, off to the unknown just a few short days from now). My final final of all of law school (and of my whole academic career) ran its course this morning. Yesterday I got to school sometime around 7:00 AM and frantically prepared for my afternoon final, only to immediately return to CTU (an office in the school my friends and I have completely taken over and named after Jack Baur's 24 "counter terrorist unit") to learn everything there is to know about wills and estates by the following morning.

Around 2:00 AM, it became very clear that we would not be going home before our final as there was still much left to do. And so it went. It was sometime around the witching hour when we were talking about what happens when a beneficiary predeceases the testator of a will that Annette very seriously said, sort of under her breath, "I really hope I predecease this final." This is making me laugh, even now. But I understood exactly what she was feeling. It wasn't just the two weeks of brutal finals, politicking, studying, competing, soul-searching, and nail-biting that had gotten us to the pits of intellectual fatigue by last night. It was the end of three long years of running at full speed, and we knew it. We felt the weight of those three years on us as we tried to learn one more thing, and tried to help one another learn one more thing, so we could take one more final so that we could finally move on to whatever it is that we are now supposed to move on to.

And just like that, the sun came up while we sat in CTU in our final preparation moments before we descended to the first floor to take our last final. I spent the afternoon passing on information to next year's 3L class in several meetings, and then cleaned out my carrel and CTU, finding four pairs of pants and an unlimited supply of Tupperware that had migrated to the school over the year. And after 32 straight hours without leaving the building, I took my pile of stuff and left, not yet feeling everything that is my life right now sort of disappear as I walked out of the building. Maybe that feeling will come after I've rested long enough to be able to think clearly enough to recognize significance. Maybe it will come after the craziness of graduation dissipates over the next two days as 150 of my closest friends and I put on awkwardly uncomfortable robes and hoods and march around Provo in front of gawking family members and friends who have been so supportive of our quest over the years, even without really seeing what that quest looks like in CTU at 3:00 in the morning on the last night of academic life. Or maybe it will all hit me as I take that car-load of everything I own and leave Provo after six years of residency this coming Saturday.

There is no doubt I'll miss it. There is no doubt that I'll look at this law school experience as one of the happiest times of my life. A time where I learned about friendship and family, diligence and struggle, discouragement and hope. And as time wears on, I'm sure the funny, light, and positive memories will become more prevalent in my ever growing nostalgia for something that has made me such a different person than I was three years ago.

I'm supposed to be writing a graduation speech right now to deliver in less than 48 hours. As I try to gather my thoughts, I have no idea what to say, in part because I have no idea what I feel (also, there are several thousand people attending this thing and I don't even know where to begin in trying to address a crowd like this). I'll probably awkwardly type up a few cliche phrases and climb into bed, hoping that tomorrow it will all come together. Who knows--maybe I'll predecease graduation.

When I last left you, I was exhausted and wondering how to prepare for a graduation speech. In those few days that have since slipped away, I lived through all of the graduation festivities and moved away from Provo. Commencement happened on Thursday when 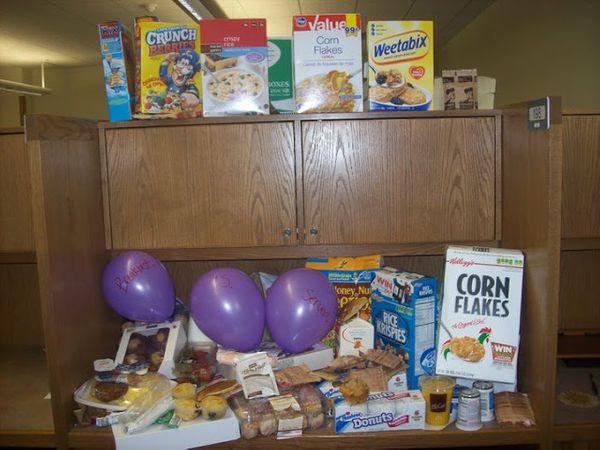 On Wednesday morning at 8:30 I updated my Facebook status (you know, Facebook. The social network that tears people apart). Less than 48 hours later, this status had a