Last weekend I went south with a number of friends (Dan, Anna, and Emma) to give Paul Cyclemon a spin in Moab. I hoped Paul and I would hit it off very quickly, as we are sort of down to the wire on this whole execution date Ironman thing, in which I will be firmly planted on top of Paul Cyclemon for about as many hours as are in a work day, attempting to haul my crying self across desolate terrain. I should mention, however, that there is now a good chance that I won't be doing any biking at all; I accidentally stepped into some standing water barefoot earlier today in the locker room at the gym and I spent the better part of this afternoon googling foot amputation options. I'll keep you posted on that.

Unfortunately on the way to Moab we discovered that the Girl Scouts have apparently now moved their war against self-control to the front of grocery stores. Where we buy food. Where they can't be dodged. I will be looking into food storage options for next year so I can avoid the bombardment of solicitous sex in a box, pawned by thousands of innocent looking yet consistently unfriendly prepubescents in pigtails. But until then, I'll continue to succumb to their cheap addictive substances and scarce coveted resources.

So after one quick pit stop somewhere along I-15, we continued our journey with a dozen boxes of Girl Scout cookies to replace the dozen boxes I massacred at my desk at work last week like an animal in exactly 52 hours. Eli: Zero. Girl Scout Cookies: About two dozen.

Our first bike excursion occurred twenty minutes after arriving in Moab. The most intimidating part of biking was learning how to clip and unclip my shoes in the pedals. For those unfamiliar with biking, let me, a new biking expert, teach you about the sport: there are these thingies on the bottom of your shoes that go inside these thingies on the pedals of a bike and the only way to detach before approaching a stoplight/cars/goats is to violently jerk your feet with all your might, repeatedly, until magically freed from the grips. So I practiced this and then set off biking, spending the vast majority of my time on the road screaming whenever I approached speeds that are considered "slow" in a car. I did, however, look super cool in my bike shorts and sunglasses. So it pretty much evened out. I only had one minor crash upon leaving the parking lot of our hotel, literally within the first ten seconds of riding Paul Cyclemon for the very first time. It looked pretty much exactly like this:

To reward ourselves for our diligent efforts we gorged on excessive amounts of greasy foods that night, interspersed with what remained of our Girl Scout cookies.

That night, the four of us wandered off, headlights in tow, in search for The Holy Grail Delicate Arch. We discovered along the way:

1. It is very difficult to see when there is no light.
2. Walking along narrow sandstone ledges that drop off into bottomless ravines isn't that terrifying when there is no light to show that that is the case.
3. Apparently simply becoming an adult does not make a person unafraid of: the dark, ghosts, monsters, aliens, loneliness, animals, other people, the future, etc.

Nonetheless, the hike was amazing, and other than a dozen or so verses of a song about hiking to Delicate Arch sung to the tune of Good King Wenceslas, it was without too much drama.

And so we rode on day 2. Now quite confident that I was basically the next Lance Armstrong (or, rather, that Lance Armstrong would soon be hoping to be the next Eli McCann), for no other reason than the fact that I could now clip my shoes into my pedals within 5 minutes of mounting, we set off for the world's steepest hill. I am quite confident that at various points we were riding up a perfectly vertical wall. One with no end in sight. Still trying to understand how gears work, I engaged in what was unfortunately a common occurrence throughout the day: flicking every trigger on the bike in rapid panicked succession, hoping that this would cause everything to settle into whatever gear was appropriate for vertical wall climb. I should not be allowed to own things. As was later explained to me by Dan (the bike expert), this caused the chain to go somewhere it wasn't supposed to, stalling Paul Cyclemon entirely, leaving me, with my feet firmly clipped into each pedal, to slowly fall onto my side, yelling and staring forward the entire way down. Other than not being clipped to the bike, that fall looked exactly like this:


Because I'm quite the amazing bike mechanic, with the help of Dan I placed the chain back where it was supposed to go. I'm now thinking about opening a bike shop. I'll be specializing in placing a chain back on the spokes when it comes off. I will need Dan to oversee my work though. This is the best career idea I've had lately so I seriously will look into.

Once we arrived at the top of the hill we realized that it was time to make our descent. This descent was very similar to how I envision skydiving. But without a parachute. Without going into too much detail about my behavior on the way down said vertical wall, I will say that I have been checking the mail every day since returning, expecting a letter from the city of Moab, signed by the mayor and all other literate residents, respectfully requesting that I never come back.

We took our biking into a canyon and rode off into the sunset. Along the way I discovered something I've been searching for all my life: The origins of The First Eye. I believe The First Eye originally sat in this rock, just watching. And hating. And one day, his hate was so strong, he broke free, and set off to terrorize the world.

After biking somewhere around 3,000 miles through this canyon, Dan and I frantically started searching for a signal on his phone, ungrateful for our earlier optimism that sent us so far when we were sure we would have no problem biking back the full distance. Eventually he was able to use his mobile device to communicate with Anna and Emma, who promptly drove the full distance and picked us up. Thank heavens for good friends. 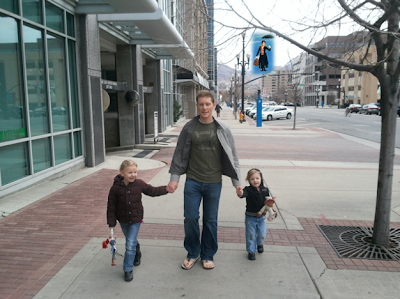 This weekend I spent some quality time with my 7 and 3 year old nieces. My sister and brother-in-law skipped town and their responsibilities for the weekend and asked if

I purchased a bike last week. Before registering for the Ironman, I thought there were exactly 3 kinds of bikes: 1. Tricycle: I had one of these as a very small child. One day I hooked a wagon up to it, loaded my baby