I had sort of a bad experience this weekend. It was an embarrassing one. Not the haha I-accidentally-got-naked-in-a-public-place kind of embarrassing. The sad-and-ashamed kind of embarrassing. I responded to a mostly innocuous situation that I irrationally let hurt my feelings. And the way I immaturely acted was totally inconsistent with who I know I am. It was nothing really extreme and probably went largely unnoticed by anyone who didn't know me well. But I was socially awkward in a way that I'm never socially awkward.

I knew it was a mistake as it was happening. It was like watching my own personal train wreck without doing anything to stop it.

Do you ever feel like the most terrible parts of yourself have taken over?

When I got home that night, Daniel sort of let me have it. He demanded an explanation for my uncharacteristic behavior and said some things that felt harsh but that I knew were sincere and in my best interest. Sometimes Daniel is exactly like Oprah. SOMEONE GET THIS GUY HIS OWN NETWORK AND MAGAZINE.

There was one thing he told me that really struck a chord and has had me doing some painful self-analysis for a couple of days. He told me that maybe I rely too much on the validation of others. And that my experiences with Stranger have created some very unrealistic and unhealthy expectations for my relationships with people.

My initial reaction when he said this was that he was so wrong. And if I thought I could pull it off, I would have indignantly slapped him and said, "You, sir, are out of line!" in my best 1920s snobby British voice. But I was wearing a really sweaty t-shirt at the time and I just didn't feel like snobby British. I've been watching too much Downton Abbey recently.

Then I thought for a few seconds and I had to wonder whether he was right, at least partially.

One day in 2011 I was writing a blog that nobody really read. And if you were reading, I didn't know about it because you never really said anything. Then, all of the sudden, lots and lots of people were reading. And commenting. And sending me emails. And attending live shows. And sometimes stopping me on the street. And constantly voicing approval of everything I was writing and doing. You all have been so kind to validate me and tell me that you appreciate something I've said. And every time I get onto what the kids are calling "the Internets," dozens of new validations await me.

And that feels awesome, for better or worse. Sometimes you all make me feel like I'm on top of the world. Some of your emails have made me laugh and cry and many of them have completely made my day. And a lot of them have just confused or scared me, but I appreciate those ones, too.

But the thing is, I'm not special. I mean, we're all "special." I've seen the after-school programs. I know this.

But I'm no super human. It's just that the thing that I have a talent for and invest time into happens to be something that can easily be publicly displayed and massly appreciated. But it's really no more valuable than so many other things that can't be so easily shared.

If your job or gardening or cooking or being a terrific mom was the kind of thing people typically watched and felt compelled to comment about, you would be getting as many or more validations from strangers than I'm getting. And maybe you are. And if you aren't, there's a good chance you deserve them way more than I do.

My point is that I don't think I do something here that's more impressive or valuable than what someone does somewhere else just because I get more recognition for it. I have always known this and haven't become confused about that point.

That said, I can't help but wonder whether on some level I have let myself become dependant on the approval of other people. Insomuch that when I don't feel or hear it, I start to think I have failed in some way or that I'm not being treated fairly.

This is so unhealthy for so many reasons. Not the least of which is that when our happiness relies on the actions of other people, we become enslaved by something we can't control. It is irresponsible and damaging to place our self-worth into the hands of even the best of people. And I believe that it is impossible to truly be at peace without finding a way to love ourselves and others, even when there is no peace around us.

Opportunity for electronic validation is omnipresent. Anything you do on Facebook can be "liked" by anyone else. Notifications are sent to us whenever somebody twitters a twite on Twitube, or whatever the heck that thing is called that I still can't figure out how to use. And I can't help but wonder if we are all becoming more and more infatuated with other people's immediate expression of infatuation for us. And I worry a little about what we're teaching the next generation about measuring their self-worth and the importance of standing up for what you believe in even when you're the only one standing.

That's not to say that validations are bad or that they aren't healthy for us to hear. It's just that, their worth depends on how we value them. And how we let them affect us.

I have to be honest with you. I think that I have sometimes let them affect me in ways that haven't been good. And I feel sort of dishonest for that and kind of embarrassed. Again, not the haha kind of embarrassed that I'm usually sort of proud of.

Look. I'm not asking you to start launching insults at me or anyone else. That's not the medicine here. I'm not actually asking you to do anything. I just thought that these thoughts might be helpful for someone else to hear.

You are not valuable because people love you. You are valuable because you love people. Every time you learn something new or make someone smile or open the door for an older lady or change the dirty diaper of screaming sick baby, you are doing something that you should be proud of, wholly regardless of whether anyone else thinks or tells you so. I value you for the things you do and are. And I hope that that makes you feel good. But I hope that you felt good before I said it. Because my recognition of good isn't what makes a thing good.

Validations can be a sweet dessert. But I hope we never starve because they don't come when we expected to eat only dessert for dinner.

Last week amid all of the Leotrix drama Daniel informed me that he had invited some people over for dinner for the next day. Daniel: Oh, by the way, last Sunday I told some people to come for dinner on Thursday. Eli: Ok. And 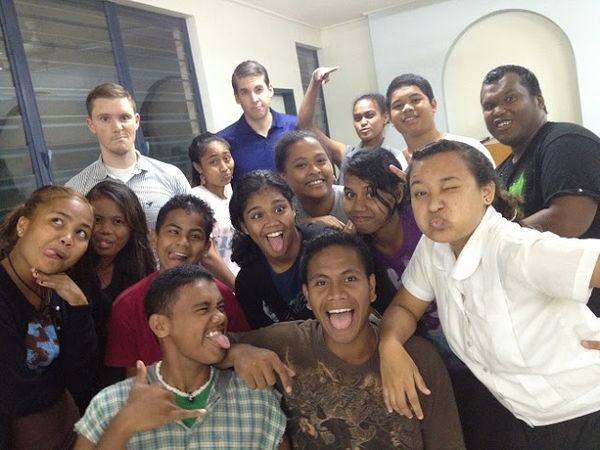 The great and terrible week has come to a close. Leotrix is probably off somewhere eating the rat poison left out for him and becoming stronger in the process. The