Last week amid all of the Leotrix drama Daniel informed me that he had invited some people over for dinner for the next day.

Daniel: Oh, by the way, last Sunday I told some people to come for dinner on Thursday.

Eli: Ok. And when were you planning on letting me know about this?

Daniel: Tomorrow afternoon. You're welcome for letting you know even earlier than I had planned.

I cook. I'm not fabulous but I'm experienced and above-average at it thanks to a lifetime of tutelage in the Bob and Cathie School of Cooking and years of my own initiative trial and error. And I can pull off a pretty good meal now in my old age. Cooking has been an especially big hobby for me in Palau since it gets dark early and I like to eat my feelings anyway, so I've been able practice my craft.

Daniel doesn't really cook. Don't get me wrong. He's a great helper. But, like, in the "it's shake-n-bake, and I HELPED!" kind of way. He bakes exceedingly well, which I don't do at all. We have very defined food preparation roles. It's a gentleman's agreement of sorts.

When Daniel invites people over for dinner, it means that he is volunteering me to cook. Which I don't usually mind. But I appreciate some notice.

What Daniel has failed to realize from time to time is that it can be pretty stressful to throw together a meal for other people in the middle of the week. Much of this is because I'm a perfectionist and spend way too much time and effort trying to get things in order that nobody will ever notice, like dusting the tops of cabinets before anyone comes over, even though they'll never see them anyway.

The party planning perfectionism is genetic. Thanks for that one, Cathie.

I'll never forget when in 2007 I threw a Christmas party that I stressed about and prepared for for several days. When two of my sisters showed up to it, one of them looked around and said in a critical voice, "it looks like mom in here."

Last Thursday was a particularly bad day for such a thing because I had a very important appointment for the hour before the dinner time and so wouldn't be able to be home to cook. It doesn't matter what the appointment was. Never you mind. STOP ASKING.

Ok, fine. It was a facial. I get facials. So sue me. Ever since moving to Palau, my skin has been breaking out like I'm 13 years old and ohmygosh is this puberty!?

I reminded Daniel of this appointment and started to let him have it when he interrupted with, "I can do the cooking this time! I'm not worthless!"

Suddenly I had 12,000 flashbacks to all of the creative cooking suggestions Daniel has offered while "helping." These include eating chicken before checking to see that it cooked all the way through and completely smothering absolutely anything and everything with applesauce.

But I knew that I couldn't be there to do it myself, so I quickly planned a meal that would be easy to cook: chicken and rice. I wrote out detailed instructions on a sticky note, purchased the items, and then talked him through the steps.

I got home ten minutes before our guests were supposed to arrive to find Daniel reading a book, and the meal only half prepared.

Eli: What is happening here!?

Daniel: Everything is under control.

Eli: They're going to be here in ten minutes! You didn't even tidy up!?

Daniel: Oh, so I have to do THAT too?! I guess I'll just be in charge of everything today!

Eli: Daniel, they are on their way right now!

Daniel: We don't even know if they're coming.

Eli: What do you mean we don't know if they're coming?

Daniel: Well, I invited them at church on Sunday but I don't think I ever got a firm answer from them.

Eli: Why wouldn't you confirm before going to all this trouble?

Eli: That is the most absurd, unproductive, ridiculous thing I have ever heard in my life!

Sometimes I have to take a step back and remind myself that Daniel and I have the complete opposite personality types and that it's ok that he doesn't share my incessant need to have organized plans that are carried out punctually because instead he has the equally valuable quality of . . . whatever it is flaky people have.

Ok. Daniel is not "flaky." I went too far there. He's very responsible in his own special way. The problem is that he is flaky in ways that he perceives as only affecting him (and unfortunately he now includes me as a part of that "him"). As a result, we are late for EVERYTHING we have to go to together. And this drives me INSANE. Because Bob taught me when I was a child that if you're not sitting at an event 45 minutes before it starts, bored out of your mind, you might as well not attend the event at all. This, I cannot shake.

I immediately turned on the high-productivity switch, which I haven't had to access too many times in Palau, and prepared a giant meal, cleaned the apartment, made phone calls to confirm the appointment, and all while Daniel "helped."

The dinner turned out nicely, and fortunately our guests arrived 30 minutes late because of some confusion when Daniel set the appointment (imagine that).

When they left a few hours later, Daniel plopped down onto the couch and let out a sigh of relief.

Daniel: Boy, that was sure a lot of work. But I think we pulled it off. 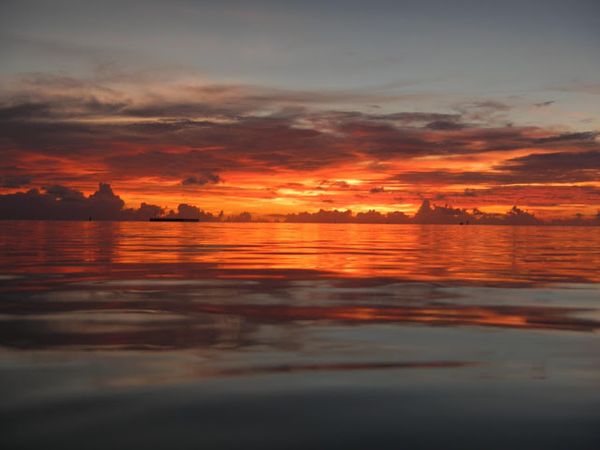 Family, friends, and Strangers have frequently emailed and asked me about what I have liked and haven't liked about living in the equatorial Pacific. The answer to those questions has