I don't know. I feel like that's a Rule of the World and I only grew up with Mormon Rules. Mormon Rules for weddings look very different than Rules of the World. I discovered this after I met Skylar. Up to that point I had mostly been just to Mormon weddings.

Then suddenly I found myself going to a wedding every weekend for six straight years because Skylar has somehow met and become best friends with everyone on the planet and especially the ones who live in places that are very inconvenient to travel to.

In Mormon weddings, you can do anything and wear anything. You can show up late or early or not at all. Nothing matters.

I told the story on Strangerville recently about how my cousin sent us a mass invite to her wedding reception one week before she got married and Skylar clawed his way through the desert despite insurmountable adversity to go to this thing even though he didn't even know this cousin because he considered it the solemnest of solemn obligations considering that "she invited us!"

Anyway, somewhere along the way, Skylar informed me that absolutely under no circumstances are you allowed to share a photo of someone's wedding until they've posted about it publicly online. That's not a thing in Mormon Rules. I've seen people live-stream to their Insta stories couples coming out of the temple.

Anyway, my sister's wedding was absolutely beautiful. I, of course, thought so, because she and I have almost the exact same taste.

It was fun. It was sentimental. It was funny. I got to officiate it, which is, by the way, an extremely intimidating thing to do. Have you ever had to perform in front of a crowd with that level of diversity of senses of humor? I'm talking people in their 90s. Fox News boomers. Vegans. Toddlers. That one uncle no one has seen in twelve years. The cousin who shared that "Plandemic" video on Facebook last year. Judgmental teenagers with ankle bracelets. EVERYONE.

How do you please a crowd like that? How do you make sure you are so funny that all the attention is on you, where it should be?

Well, somehow I managed because I was, of course, very hilarious. I'm choosing to believe that.

The turnout was great. People shuffled in and out all night at an open-house reception. At one point Skylar disappeared and I found him back in a kitchen somewhere washing dishes, which is so damn adorable but also, I really needed him to meet my weird Scout leader from the 90s who got into a huge fight with his wife in front of our entire troop about who ate the last piece of ham.

Finally, the night wrapped up. And that's when my younger sister grabbed my arm and said "I need to show you something."

She took me down a hallway and led me to a table. And y'all. I gasped.

My dear parents, in true Mormon fashion, ordered enough cookies for this wedding to feed armies. Not just one army. Many armies. So many armies that you would have to have several planets of warmongers to support them.

My parents were doing that hysteria laughter by this point. The kind where it's not clear whether they are terrified or amused or both or neither.

"I think I ordered the amount the internet said to order," one or both of them said. "I'm not really sure how this happened."

The next thing I knew, my mother was legit pulling people in from off the street. Passersby. Strangers. People out just minding their business on a Tuesday evening in wherever, Utah, USA. Forcing them to take plates and boxes of cookies.

"Please. Please help us," she begged them.

Any family members still in the venue were promptly assaulted with hundreds of cookies. Skylar took 400 or so and put them in the back of his Subaru. "I guess I'll just take these around to the local hospitals in the morning and drop them off with anyone who will accept them," he told me, shrugging.

We somehow got rid of every last one.

As we drove home Skylar asked, so innocently, "how could anyone think that was the right amount of cookies to buy?"

"I get it." I told him, defensively. "You don't want to run out. Frankly, I might have ordered more than they did if I had been in charge of that part."

You can take the boy out of Mormon, but you can't take the Mormon out of the boy.

This time in Strangerville, Eli had a meltdown, Meg is trying to get him to go to some church. Any church. And Eli took the Strangerville Live stage to tell the story of Skylar’s first three visits to Salt Lake City when they 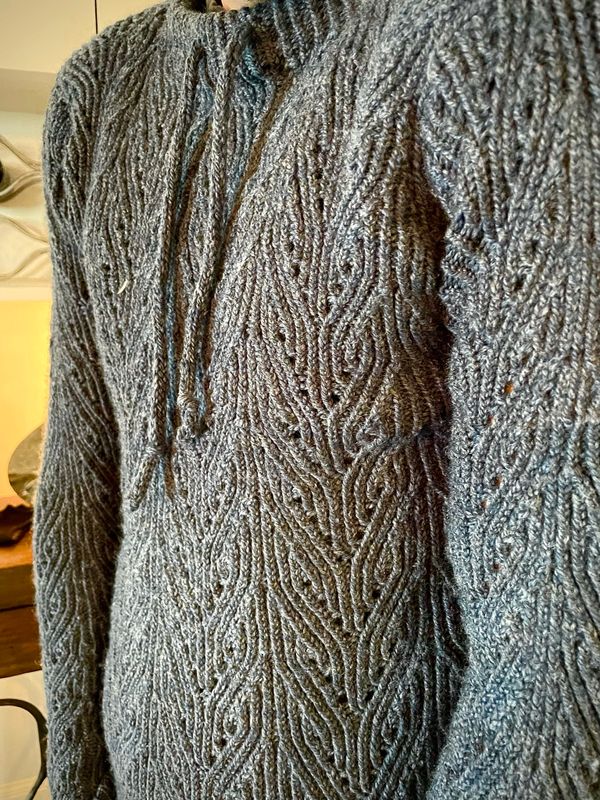 I started a sweater nearly a year ago and I meant to knit it for myself but after about six months, I started to realize that it was going to