Last Thursday I stayed at my parents' house so I could babysit my mother. She said it was unnecessary, and I think she was probably right, but with dad in the hospital and mom in a painfully slow covid recovery, my siblings and I thought it would be best not to leave her in the house by herself overnight.

Mom went to bed around 9:30. I had work to do because, and this is incredibly rude, my job decided to keep happening even though my family is in crisis. So I stayed up, working away on my laptop.

It hit me around then that this was the first time I would be staying overnight at my parents' house in probably 8 years. That sounds like I had a falling out with Bob and Cathie, but I didn't. The reality is when you live 25 minutes away from your parents there is rarely a need to go sleep at their house in your 30s.

I stayed there every other weekend or so when I was in college or law school, mostly to do laundry and experience life not in a house with 9 other 22-year-old men who were all playing a dangerous game of chicken to see who would snap and clean the one shared toilet first.

Then I moved to Palau for a while and didn't see my family at all. When I moved back to the states in 2013, I got a place of my own and I've just never slept over at my parents' house since.

Once I realized this on Thursday, the whole experience suddenly felt so nostalgic—like I was returning to the shire after a long arduous journey. Just over there, next to the fireplace, was where my little sister and I played checkers when I was 7 and she was 5 and I told her the black pieces (mine) could eliminate the red pieces, but not the other way around, and she totally just went with it and couldn't believe she kept losing.

Up in the kitchen is where I sat with my mom until 11:30 PM frantically gluing images she had printed out from our home computer to create my fourth grade history fair display about the Vietnam War, which I forgot was due the next morning until just after dinner.

Just there, on the floor of the family room, is where I had laid down next to my dad in 1994 until late on a Saturday night trying to beat Mike Tyson's Punch-out on the Nintendo.

And now, it was the same place where I was slumped on a couch, typing out some work emails—that same mom upstairs with an oxygen tank trying to get some sleep—that same dad in a hospital down the road trying to breathe—that same sister, now a nurse, keeping the family together, talking to the medical staff, checking in our parents, all while managing a full-time job and four kids of her own. Kids who are cheating at checkers and forgetting about history fair projects until the night before.

Eventually I shut down my laptop and found my way to that sister's old bedroom and tried to fall asleep on the daybed she had as a child. There were glow-in-the-dark stars on the ceiling, which she had placed there nearly three decades ago in the shape of a smiley face.

I pulled onto myself a puff quilt she and my mom made together around that same time, and I closed my eyes.

This time in Strangerville, Eli’s family is being haunted! Meg didn’t get celebrated enough on International Women’s Day. And a piece about how our perception of online dating has evolved over the past two decades. Story Online Dating, by Eli McCann 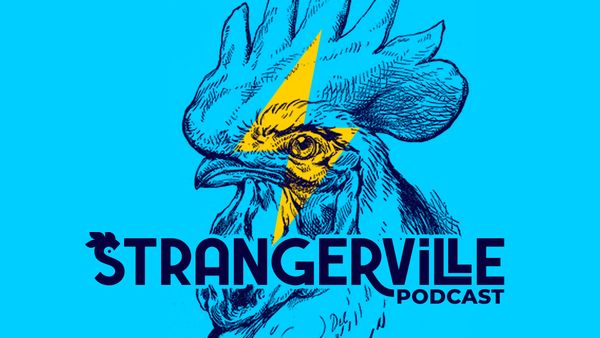 My parents tested positive for Covid a couple weeks ago. I'll probably share more about how stressful (I mean, like, living in a nightmare concocted by Satan itself) this has