I say that I’m not a cruise person. That doesn’t mean I didn’t have a good time last week with all 6,000 members of my family on a boat in Alaska. But the good time was had in spite of the boat, not because of it.
It’s probably because I’m a snob that I say this. Not generally. I don’t think I’m a general snob. I think I’m a travel snob.
I’ve got a friend who has a theory that everyone is a snob in at least one way. Even the most laid back person has at least one thing they are a snob about. Maybe you’re a food snob or a movie snob or something really specific, like a toothpaste snob or a Dr. Who snob. We all have at least one thing about which we are particular to the point that we almost subconsciously look down on others for having different (read, worse) taste.
Well, I’m a travel snob.
That doesn’t mean I stay in the Ritz and fly first class. Being a travel snob for me means seeing the world without being a “tourist,” whatever that means. It’s about going to places lazy people won’t deign to suffer. Places where you probably won’t get giardia from a hut in a town not found on maps.
I think the first time I ever even saw a cruise ship was in 2016. My friend Adam and I were in Helsinki and we needed to get to Estonia. We found out you could purchase one-way tickets across the water on a cruise ship that was making stops in both places. It was a three-hour or so ride. We, the temporary-ticket holders, were ushered to the buffet dining area of the ship to find a seat at some table. We sat with the cruisers, our noses slightly upturned, as they avoided us because we hadn't showered in a few days.

We were deposited into Tallinn with the cruisers who then had a completely different experience in Estonia than we did. They wandered to the edge of the port town and bought tacky t-shirts that said “I [heart] Estonia” in English, and they had cartoonists draw their pictures, like they do in Disneyland. After a couple of hours the cruise line sent vans to drive the tourists the two blocks back to the dock so the ship could take off to its next destination.
The town transformed once the ship left. The t-shirts shops shut down and the streets came to life with local music and small food festivals. We got a rental car a couple of days later and drove through the country, stopping in small villages, visiting 500-year-old churches, staying in people’s homes, and eventually crossing the border to spend time in Latvia and Lithuania.
It occurred to me somewhere along the way that those cruise people were going to go back to Ohio and tell their neighbors that they went to Estonia. “Oh, we’ve been to Estonia,” they might bark during a casual conversation about bucket lists. “Not much different from here, really. Same t-shirts and food.”
I snobbishly resented the cruisers the same way people who actually live in Estonia for some significant amount of time probably resent me for acting like I really experienced the place.“Cruises aren’t realtravel,” I told people from time to time thereafter.
And then, suddenly, Skylar and I were packing clothes and books and shoes into a few bags to take off for a seven-day Alaskan cruise with my family.
“It sounds wonderful,” Skylar assured me. Of course it sounded wonderful to him. He can take naps and read books for hours without once feeling like he’s been wrapped in a tight blanket, his movement totally restricted, his freedom completely constricted. The word “relax” doesn’t make him break out into hives like it does me.
My dad decided to do it for his 70th birthday, which isn’t for another two years, but who’s counting? He told us last year he wanted the whole family to go, including all nine adults and seven children (minus one baby because we don’t know if we love her yet).
My mother made t-shirts for the occasion, which t-shirts she made us wear one day for a family photo. In front of other humans.

We wandered into some towns every day or two.
We visited crab boats.
We biked around a rain forest.
We hiked to a glacier.

At one point we went to a karaoke event that was, well, totally boring. Until Skylar got onto the stage. He had been hanging out in our room in his sweats because he was "very sick." I convinced him to join us down in the karaoke area, and he just couldn't abide the crowd, which was mostly falling asleep. So he signed up for a number, and asked my sister, Micalyne, to be his backup singer. I tried to warn Micalyne that she would be totally irrelevant once the music started.
This is what then happened. I'm sorry.

My future husband, ladies and gentlemen.
When it was over, a woman walked over from the other side of the room and said to Skylar, "I feel like I've been waiting my entire life for this exact moment."
Look. We saw Alaska, and it was wonderful.
Not much different from here, really. Same t-shirts and food. 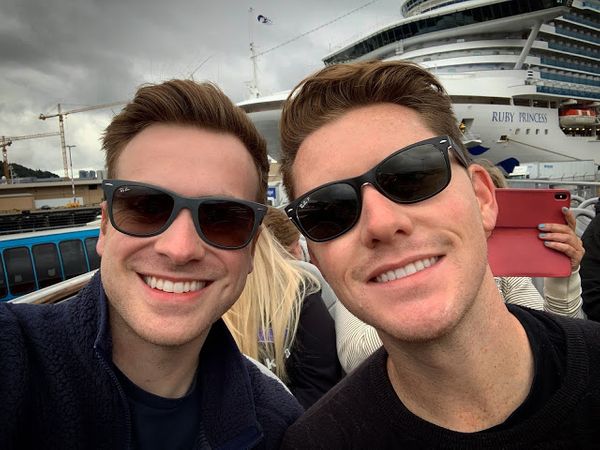 Our wedding is in like two months which somehow simultaneously sounds stressfully close and impossibly far away. Oh, in case you stopped reading Stranger for a few years and you

I've been saving this for a while. Please cast your vote for your favorite answer. There are some WINNERS here. Question 1: If the Titanic sinking really happened, why didn't