I actually wasn't going to post anything today because I had a late and VERY strange night last night having dinner with Mexican celebrities. I didn't really realize what I had gotten myself into until I was in the middle of it. I'll have to tell you that whole story sometime. As it turns out, I REALLY don't understand Spanish.

So because of that I woke up late and I'm slammed at work and trying to get ready to see you all at The Porch tonight for The Porch's Christmas show (tickets are here). And I decided I wouldn't post anything today and would instead suffer the wrath.

But I just looked at the date and realized that today is a special day. December 12th is a holiday of sorts in Strangerville because it's the date that many of you found Stranger, or, at least, the date that I posted something that directly or indirectly eventually brought all of you here.


Two years ago today I posted Snuggie Texts. When I did, I had no idea that this silly personal blog that I had been keeping for several years would go from being largely ignored to developing a sizable community of its own. For the last two years we've laughed and cried together. We've shared our feelings and our funny stories. We created dozens and dozens of inside jokes that we can reference in passing to one another without further explanation. For example, I can say something like, "Leotrix and the Queen of Colors said your hair looks totally twice up the barrel, once down the side today." And you know exactly what I'm talking about.

What I wanted to say when I saw the date today is that I am so grateful that we have what we have here at It Just Gets Stranger. The last couple of years have been challenging for me. And 2013 in particular has brought one thing after another all year long that I wouldn't have believed I was strong enough to survive had I not actually seen myself . . . survive. So much of my getting through what I have gotten through this year I can attribute to you. To your support. To your kindness. To your inclination to take a minute out of your day to send an encouraging email or a stupid link that I will most definitely waste 25 minutes messing around with.

Human connection is the thing that brings the most fulfillment in life. It brings the most heartache, too. But that's just sort of how it has to be. Because that heartache helps us appreciate those to whom we can turn so much more. And, yeah, I haven't met most of you. But I feel connected to you. And in a way, I've been able to turn to you when that heartache has come. That has been fulfilling for me. I hope it has been fulfilling for you as well. 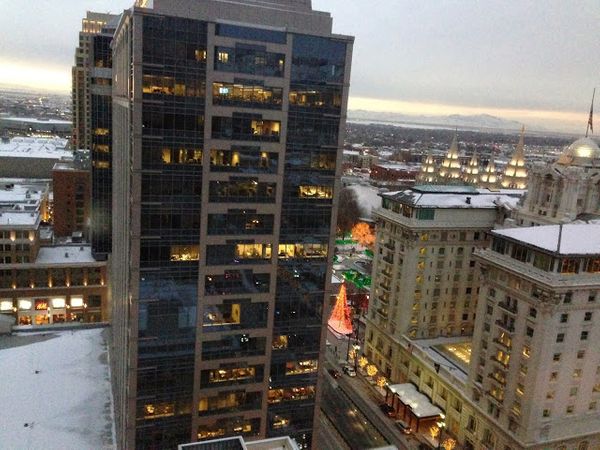 Just rolled back into Salt Lake City after a very fun night at The Porch. I should have the videos up for you over the weekend. A huge thanks to

I feel like a broken record announcing this for the third day in a row. But you've come to expect that around here. I really only have about three different jokes that I just use over and over again, interspersed with references to the