When I returned from Palau, I felt like my soul was shattered into a million pieces. I was so broken over my terrible falling out with Daniel. I missed people I loved so much. I was traumatized by some of the most challenging things I had ever faced. I was so lost about where my life was headed. Sure, I had a job and a family to come back to. But for the first time in my adult life, I didn't really know to what end I was stepping into the next phase.

I felt really really alone. I feared that my next step was to make perpetual monotony the status quo. To turn my life into an eternal nine-to-five, where I worked toward nothing in particular and did it all by myself.

Never did being single seem so harsh to me as I entered the United States of God Bless America. Before, I had Daniel. Sure, he wasn't my life partner. But he had my back and I had his in a way I had never really experienced with another person. And his friendship and support for so long was a stabilizing force that kept me from coming apart at the seams when life changes felt life-changing.

But he was gone. And not only that, he was gone after I had just experienced the most difficult months of my life. He was gone at a time when I really needed him not to be gone.

Several months before I returned to America, I was totally dragged through the mud and betrayed (not by Daniel, by the way) in ways that continue to affect my life and eat at my spirit. In hind-sight, a lot of this was my own fault. And recognizing that in recent months has done miracles in my quest to heal. But regardless of whose fault it was, it was still painful. The reason I mention it now is to describe for you just how rough of a state I was in when I came back to the U.S.

I recognize and appreciate that my continual refusal to tell you the details of that story from one year ago is probably annoying to some of you. I get it. And I seem like an obnoxious drama-queen and attention-fisher by continually bringing it up like this without dishing out any of the details. I think one day I'll be ready to tell you that whole story. But not now. And I hope you'll be patient with me as I tell my own story in my own way and in my own time. And I hope you'll understand that the reason I've been telling it vaguely and in bits and pieces is because I want to share with you what I feel healthy enough to share and I want to share with you the lessons I'm proud to have learned.

The lesson I'm proud to have learned recently is that it is incredibly liberating to be honest. To be willing to dig deep and recognize the ugliest parts about ourselves. To be insightful enough to notice how the ugly parts are not who we are. And to be brave enough to share them with others in an effort to demonstrate to ourselves that what makes us uncomfortable about who we are doesn't have to make us uncomfortable about who we are.

I saw the second half of The Sound of Music recently on TV. It started at that part where Maria realizes that she has a mad crush on a man with 200 children and so she does what we would all do in that situation and runs away to the convent.

When she gets to the convent, Mother Superior is all like, "what the hell are you doing here? We thought we got rid of you back when we sang that song about how you're the biggest flake to ever kick it in this abbey."

And Mother Superior keeps trying to get more info out of Maria because she's not really making any sense. And Maria is like, "I can't go back to that man again!" And Mother Superior holds up a doll and she's all, "now show me on this doll where he touched you."

And Maria is like, "nobody touched anybody!" But then she says with her eyes, "I wish there had been some touching." And that's when Mother Superior is like, "OMG. You're in love with that man, aren't you?!"

And Maria kind of thinks she's going to get in trouble because she thinks she's supposed to devote herself to God by being a nun and NOT by falling in love with a SUPER rich guy with perfect hair. But Mother Superior is like, "that's stupid. We don't even like you around here that much and not everyone is supposed to be a nun. So if you found a hot guy who wants to get jiggy with you, ESPECIALLY IF HE HAS MONEY, run to him."

And this freaks Maria out. And she's like "NO! Please don't make me go back!" Even though deep down she desperately wants to go back and make more clothes out of curtains. And Mother Superior is like, "I know being honest about your feelings and dreams and facing them is scary, but the abbey is not a place for you to hide from things that are scary."

Then Mother Superior sings that whole song about "Climb Every MOUNTAIN!" Which I think is all just one giant innuendo. Because Mother Superior is a little over the whole celibacy thing.

But Maria, in all of that singing, hears this one line that's actually quite powerful. Mother Superior tells her to be willing to climb every mountain and do all of the hard things and self-reflection she needed to do to find her dream, "a dream that will need all the love you can give, every day of your life, for as long as you live."

Maria realizes what her dream is. And she realizes that if she's going to capture that dream and actually be capable of giving all the love she has, every day, for as long as she lives, she's going to have to be brave enough to admit to herself the reality of her situation. And strong enough to do what feels right and true according to her capabilities and life circumstances.

She does just that, running back to the family she knew was her dream, admitting to herself and everyone who she was and what she felt, and embracing the beautiful doors that this opened to her in the process.

And you know the weird thing? 2014 is the first time in my life when I haven't actually felt that scared.

I think this is because I'm finally appreciating who I am and who I am not--even the parts that used to be kind of hard to swallow. And in so doing, I'm finally feeling capable of giving all of the love I can to what matters, every day of my life, for as long as I live.

Climbing every mountain is really hard. It takes courage and bravery and honesty. The gut-wrenching kind of honesty that can only happen when you decide to be totally vulnerable. But good luck finding that dream--that beautiful beautiful dream--without climbing a couple of mountains first. 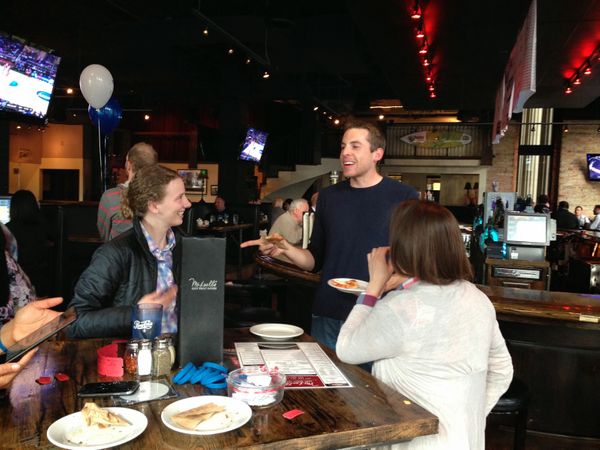 I ran for two hours on a treadmill tonight. It was the stuff of nightmares. And I know what you're thinking. "Eli. Why didn't you run outside? You are so

Eli: Excuse me. What are you doing? Daniel: I'm going through your closet. Eli: And why would you be doing something like that? Daniel: Because I want my clothes back. Eli: What on Earth makes you think that I would have your clothes in