About six months ago I moved back from Palau to the United States of God Bless America. And when I did, I had a hard time updating you all on the millions of life changes that happened at once AND keep talking about how Trixy Meowman's most recent grooming went. I got a bunch of questions at the time from Strangers who were starting to feel like my general and consistent story-telling was reaching the nonsensical level of Glee. So I finally did a post called "State of the Union" to give you a quick answers to some of your questions.

I realized recently as I glanced back through the past couple of months on Stranger that while I have posted regularly, there are some pretty significant life changes that I have failed to discuss. As a result, you guys aren't completely aware of absolutely everything that I'm doing all of the time always. AND I DON'T KNOW HOW YOU'RE FUNCTIONING!

So, here you go. The spring edition of the State of the Union.

1. You have mentioned the name Brandt a few times. Who the HELL does he think he is and why is he ruining our lives?!

Somehow I completely forgot to introduce you. And you should know who Brandt is because you will probably be hearing a lot about him in the coming months. Brandt and I met a few months ago through a mutual friend and for reasons we now don't understand and really resent, we decided to train for the Ironman together. Now we can be found any time of any day complaining while swimming in a pool, riding bikes, or running.

I'm happy I met Brandt because he's very funny. But the one downside is that he unequivocally has better hair than me. He has Disney prince hair. And I can't compete with that. I believe I will probably shave his head when he isn't looking. But until then, I'm going to need you all to compliment my hair MUCH more vigorously than you have been.

2. What's the deal with this whole Ironman business?

Well. First of all, I hate it. I hate all of it. It is a terrible experience, just like I remember from last time. But I'm also very proud of myself and I'm such an inspiration, etc. But I'm like an inspiration with a terrible attitude. The Ironman will take place in Tahoe in September. But Brandt, who is more responsible than me, thought that we should compete in a half Ironman before the real deal. So, because of peer pressure, I signed up for the half Ironman race in St. George, Utah, which will take place in May. I'm already having anxiety attacks at the prospect of swimming in that lake again.

I had set a goal in my early 20s to complete an Ironman by age 30. Well, I turn 30 in May (WHAT THE CRAP HOW DID THIS HAPPEN!?!). So I've spent the last year trying to convince people that the goal all along was actually to complete an Ironman AT 30. So going to Tahoe is September is right on schedule. But Brandt recently informed me that since I did half of an Ironman last time before getting disqualified, and since I'll be doing a half Ironman right before my 30th birthday, this equals one full Ironman which means I totally accomplished my goal and I should get to eat as much ice cream as possible right now!

And I realized in that moment that I loved Brandt with every fiber of my being. Then he flipped his Disney prince hair and I went back to resenting him and thinking he was the worst person I know.

3. What the HELL happened with Kurt?

I looked back and I haven't mentioned Kurt here in months. And you probably think he's dead. Which kind of makes you all bad people because you didn't even send flowers.

You've heard very little about Kurt in recent months because I've seen very little of Kurt in recent months. With Ironman training and our conflicting work schedules and the 3.5 hours a day I spend on my hair, our paths haven't crossed much. And in fact, Kurt moved away just last week. And now I am living alone for the first time in my life. As it turns out, I'm very afraid of ghosts and aliens.

4. How is Jolyn still alive?

Guys. When Jolyn dies, we'll have been dead for a long time already.

5. Have you been fired from your job yet?

No. Miraculously, no. Whenever anyone asks me to do something, I politely nod my head and write down all of the words they just said that I don't understand. Then I compliment them on their outfits and this seems to blind them from my ignorance. I plan to do this for the remainder of my career.

In all honesty, my job is going really well. I love it and think I'm doing a perfectly nice job, ifIdosaysomyself thankyouverymuch. It's challenging, but in a way that is really good for me. Basically my life is exactly like The Good Wife. Except, not as much infidelity.

Well, as a matter of fact, Daniel Clause is coming to town this week to visit for several days! That is, of course, assuming he can get to the airport on time and board the correct plane. Daniel continues to enjoy the warm life of Phoenix. But I suspect he'll be singing a different tune in the Hell of America come July.

The other day I got a phone call from my three-year-old niece, AKA "The Child Who Hates Me." Our rocky relationship hasn't improved much during the course of her almost four-year life. I have no idea what I'm supposed to do. I've tried everything 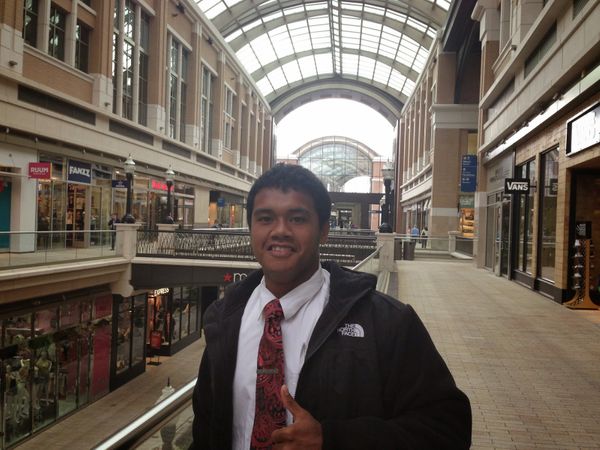 Last week my worlds collided. And it was really strange. One of the boys from Palau, whom I got to know very well working with the church kids for one