Every day that passes I get a little more freaked out about my future. This is because the part of my future that is freaking me out is starting to feel more like the present.

You guys. Remember how I'm doing the Ironman again? Remember how this is all completely your fault since you were supposed to stop me from doing this and encourage me to eat ice cream instead? Remember how I've been there for you at every significant moment of your life but the ONE time I needed you to be all, "Eli! Close that computer right now and don't you DARE register for something you are just going to complain about for the next year!" instead you guys were watching tv and not paying attention to me?

I bet you were watching Glee. I believe that Glee is somehow responsible for all of this.

Well, sadly, the St. George Half Ironman is NEXT. FREAKING. WEEK.

How did this happen?!

The Ironman has taken over my life in recent months. I hardly have 5 hours a day to look at myself in the mirror anymore.

I've been getting really freaked out recently about this Half Ironman. This is in large part because the race is going to take place in the same location as the infamous Ironman in 2012 that Daniel and I are still seeing therapists to get over.

Note: Eli's therapist = Paul Simon and cheesecake. Daniel's therapist = meowing Katy Perry songs and bathing in applesauce. To each his own.

Ever since Brandt Mr. Disney Prince Hair and I visited St. George a couple of weeks ago and rode the bike course, we've been really concerned about our ability to bike up hills that are basically sheer cliffs. Oh, the tears. The miserable pain-induced tears.

So on Saturday we decided that for our last excruciatingly torturous ride before tapering our workout schedule in anticipation of the upcoming race we would climb the tallest mountain and "conquer" it.

Another note: "tapering" is real thing so don't you dare "tsk tsk" me and call me lazy. At some point you have to just start letting your body heal from the misery you put it through so . . . it can be fresh when you put it through more misery. What this means for us is that we spent four months basically drowning in pools and crashing on our bikes before spending two weeks saying however many Hail Marys and Lord's Prayers with full body crossing as can be fit in two weeks.

I just did the math and figured out that if it takes me 15 seconds to say the Lord's Prayer and if I forego sleeping I can say the Lord's Prayer 80,640 times in two weeks. Minus 480 times for the two episodes of The Good Wife I'll have to watch during those two weeks. But that's still 80,160 and I'm SURE that's sufficient and if it isn't then I'M JUST NOT RELIGIOUS ENOUGH.

Anyway, Brandt and I decided to ride to the top of a canyon that we bike frequently. It's a very tough climb and we knew it would take us a couple of hours to make it up and back down. So off we went.

SNOW. In APRIL. That's how high this peak is. You have to duck to miss the space station.

On Saturday we were surprised when we finished the treacherous climb to find that the snow had been cleared from the road, paving the way for a descent down East Canyon, a road less traveled and one that Brandt and I had never seen.

Feeling adventurous, we decided to take it. And in a way, we were sort of happy that we did. Because it was one of the most breathtakingly gorgeous rides I have ever done.

But in a much larger and more important way, this was the biggest mistake of our lives. And I'm even counting every single time I ever went on scout camp as a teenager.

This was a mistake because the drop down the backside of the canyon was basically a free fall into the bottom of HELL.

It was an interesting ride down the canyon, and I guess that's why we kept going, knowing the whole time that we were going to have to eventually reap what we sowed and make our climb back up to the top. The snow was piled high on either side of the road, and it seemed really out of place because it was about 70 degrees outside and birds were flying back and forth in front of us as though it was the middle of summer.

We descended about eight miles into Morgan County, the middle of nowhere, before Brandt finally got a flat tire. We changed the tube and decided it was time to head back.

Besides the 2012 Ironman, I don't know that I have ever done a ride more difficult than this. My legs screamed as I very slowly climbed the very steep hill, mile after mile, on my very lowest gear. Already several hours into the ride and long-since out of food and water, I would have given just about anything to be life-flighted off of that mountain.

I had flashbacks of riding into the 40-mile-per-hour headwinds in St. George almost exactly two years ago, crushed over knowing that what I had worked so hard to accomplish was most definitely not going to be accomplished. I'll never forget that feeling. And I can conjure it at any time if I just think about the experience. But on Saturday, climbing that mountain--that seemingly insurmountable mountain--the emotions of facing impossibility came flooding through me, whether I wanted to feel them or not.

It was hard. It was really really hard. And I couldn't help but think, over and over, how can I be expected to actually do this?

I reached 200 and passed a turn I remembered almost crashing on forty minutes before when the steepness of the hill presented a much different obstacle than the same steepness did now.

I reached 500 and dodged a ball of snow that had rolled into the road and was much easier to avoid on my 8-mile-per-hour climb than it was when it sneaked up on me on the prior 40-mile-per-hour descent.

And I felt relief from the pain to see the end, even though there was still pain and even though Big Mountain wasn't the end.

I heard Brandt call out a happy cheer. We had made it to the top. We had fought the good fight and overcome something along the way.

Wherever we are, whatever we're doing, there's always some possibility threatening to bar us from "making it." Whatever that means. But I reminded myself, as I rode, that while I may not have had control over the existence of those barriers, I did have control over how I would face them. And whether or not I would find a way to succeed in a way that mattered.

And I have to think that the people who navigate this life successfully are the ones who figure out how to set aside the despair of being enslaved by challenges and put their focus toward the liberation of being able to control how to face those unchosen-challenges.

I guess we just do that by persevering. Because sometimes that's all we can really do. Sometimes we look at the path ahead, the seemingly-insurmountable obstacle-laden path, and we can't come up with any plan other than to carry on.

It was this kind of "plan" I think Paul Simon inspiringly wrote about in the The Boxer.

In the clearing stands the boxer
And a fighter by his trade
And he carries a reminder
Of every glove that layed him down
And cut him 'til he cried out
In his anger and his shame
"I am leaving, I am leaving"
But the fighter still remains

So we carry on. We climb. We carry with us every reminder of the blows we received along the way. Blows that have turned into wisdom and reminders that we can live through them and remain.

On Saturday night I was out relatively late. Don't tell Bob and Cathie. And NEVER YOU MIND what I was doing! None of your business! My personal scandals shall stay personal! Ok. Fine. I fell asleep on a friend's couch watching something called "Untold 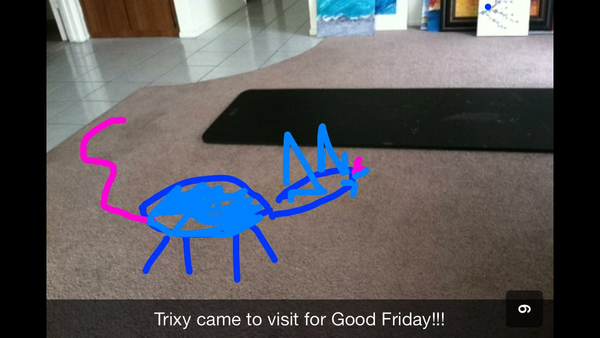 Happy Easter. Daniel sent me the below Snapchats. First of all, I don't understand why Trixy and Leotrix are visiting Daniel without telling me first. Second, I would really like