Maybe it's because I'm turning 30 next month (WHAT?!!??!) but I've been a lot more reflective recently about the direction my little ol' life has gone. And lately I keep finding myself caught up in feeling disappointed because of the things that I've missed throughout my 20s.

I think everyone can probably relate. Everyone is missing something that they've always wanted. Or something that they've always thought they were supposed to have by now. For me, that something has a lot to do with family. As I've seen my friends and peers get hitched and pregnant and sink away into a life of fulfilling family time, I've found myself feeling a little empty. And sometimes sad. I think about the connections my friends have had with their spouses and children. Connections that they've all been building for many years now. Connections that are absent from my life. Disappointingly absent from my life.

And I keep banging my head against the wall, frustrated in the years that have been wasted as I've navigated unsuccessfully through thousands of decisions that have left me turning 30, all by myself.

Then last week I caught part of the Wizard of Oz. It's one of my favorite movies. And I caught it just at the right time because I was able to skip all of the depressing Kansas parts and the psychedelic Munchkin Land sequence.

I mean, Dorothy wasn't super hot. But she had it going on for 1930s Kansas. And for Oz. In Oz, Dorothy was like an 8. The Tin Man was a 6, the Scarecrow was a 4, and the Cowardly Lion was a 3 but totally could have been a 7 if he would have just stopped whining all the time. The Wicked Witch was like a 4 and all of the monkeys swarming around her were clearly 1s. So naturally WW was super annoyed when Dorothy showed up and obliviously started taking so much male attention. And she was extra pissed when it was clear that Dorothy was just stringing them along and not really interested in anything more serious.

But between you and me, I think Dorothy did the WW a favor because all of those men were clearly gay.

Anyway, in the movie Dorothy and her male groupies wander the world, following the Yellow Brick Road as they go. The WW pops in every now and then and acts super bitter and sexually frustrated. And this does not help the WW get any male attention. But nobody ever taught her these rules when she was going through puberty. Probably because she had green skin and this freaked people out.

But the crew is trying to make it to Emerald City so they can see the Great and Powerful Wizard, whom they understand to be mysteriously capable of giving each of them the thing they want the most. A heart. A brain. Courage. A trip home.

They're freaked out when they finally do get to Emerald City. They're tired from the journey and they discover that the Wizard is this incredibly angry disembodied head that refuses to help them without some conditions. They have to kill the WW and bring back her broom.

The crew heads to the WW's house and they sort of accidentally kill her by throwing water on her and finding out that she's actually one of those aliens from Signs. And Dorothy acts apologetic to all of the monkeys and she's all, "oops. Sorry. I didn't mean to. I can send a check later if you just tell me how much . . ." But the monkeys are like, "are you kidding? This woman was a nightmare to live with, especially since she started making us give her pedicures. WE SHOULD BE THANKING YOU."

They go back to the Wizard and they're all like, "we killed the old lady. Can we have our stuff now?" There's some sort of mishap and they are shocked to discover that the disembodied head is actually just a product of some really awesome special effects and in reality, the voice of the Wizard is coming from a little old man behind a curtain who is at least as confused with life as they are.

And they're pissed. And sort of relieved. Pissed because they just traveled all this way to get advice from Colonel Sanders but relieved because Colonel Sanders can't shoot fire out of his face like the Wizard could.

But they're all, "we just went on this really dangerous journey because you said you could give us some impossible things and now you're telling us that we're all going to be stuck like this forever?"

And Colonel Sanders is like, "no, actually. You guys already got the things you're looking for. You obtained them in your journey. You learned something. You figured out how to care. You forced yourself to be courageous. All along you wanted things you could only give yourselves."

Dorothy is still standing there and she's like, "what about me? I want to go home. This place sucks so bad that I actually want to go back to Kansas. KANSAS."

And the man tells Dorothy, "you always had the power to go home. You just need to make it happen."

There's some very complicated magic that surely Dorothy wishes someone had just explained to her at the beginning. But whatever. And the next thing she knows, she's home.

I found this whole scene so enlightening as it played out when I watched it recently. I guess this is because I was thinking about their journey in the context of my own quandary. I kept thinking as they marched on the Yellow Brick Road how much I could relate to their feelings that they were each missing something from their lives that everyone else seemed to have. And that they were so desperate to find someone or something that could give that to them.

In the past when I've watched this movie, I have always felt a little disappointed at the end when the Wizard doesn't give them what they came for. I feel terrible that instead of getting an actual brain, Scarecrow just receives some platitudes. And that Tinman gets nothing more than a lecture about love. But this time, it was different. I guess I just noticed something different. And I noticed it when the Wizard started talking to the lion.

Amid all of those sort of confusing exchanges of gifts and wishes, Cowardly Lion steps forward and is like, "how can I stop being such a baby? I run away when I get scared instead of facing my problems and I feel like this is something that needs to be changed."

The Wizard says that the lion has it all wrong. That it's true that courage is a good thing to have but that just because the lion sometimes retreats when things get scary, this doesn't mean that he has no courage.

"You, my friend, are a victim of disorganized thinking. You are under the unfortunate impression that just because you run away you have no courage; you're confusing courage with wisdom."

It's interesting. The lion had just finished this really terrifying journey on the Bachelorette. He had been told all his life that to be courageous you have to fight against everything you can. "Man up." "Don't be a doormat."

They had all decided that a heart, a brain, courage, a home--all of these things--looked a certain way. And they were determined to obtain the version of their coveted gifts they wanted from the beginning.

They were told, essentially, that they were seeking things that they couldn't change or totally control. And in so doing, they were failing to see the incredible things life experience had given them along the way.

I feel like I have been guilty of the same kind of thinking that caused the Oz crew to be so dissatisfied for so long. I've craved an ideal in a way the world painted it and I have failed to appreciate how my life experiences have given me something better for me. And even if it isn't better, it's what I have.

We grow into something by choosing to internalize our hardships. We develop by staying the course and refusing to become embittered in the process. And we find our home by deciding to get there and being brave enough to figure out where "there" is.

My experiences are what they are. And I'm proud of them. Because they're mine. And I hope not to let "disorganized thinking" keep me from noticing why those experiences are so valuable.

Last night living-in-sin roommate, Rebecca, and I returned home from Seder. (We apparently think we're Jewish. Shalom!). It was late and I just wanted to go to bed. You guys. I need to tell you something that isn't a very nice thing to say. 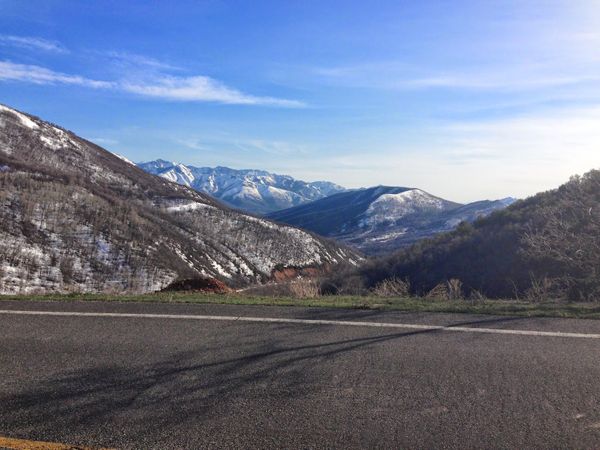 Last night I hosted the weekly Survivor party at my place (is anyone out there watching Survivor?). I'm trying to turn the party hosting into a cutthroat competition by having