Ironman Boulder is now somehow less than three weeks away AND OH MY GOSH WHO IS IN CHARGE OF TIME AND WHY ARE THEY MESSING IT UP!?

Wasn't it just, like, yesterday that I was telling you all about how the Tahoe Ironman was cancelled and I never wanted to exercise again but that I signed up for a race that was nearly a whole year away because dreams and goals and all of that garbage? And you guys gave me all of that BS about "never give up on your passion" and "be your own hero" and all of that other nonsense that's easy to say when you're not the one who has to then exercise for the next year? Wasn't that YESTERDAY that that all happened?

WHY IS THE IRONMAN IN THREE WEEKS?!?!

I knew I should have made a paper chain counting down the days because then nobody could have pulled this fast one on me. I could have carefully tracked the time and when I suddenly realized that the Ironman was three weeks away I could have surveyed the paper chain and been like, "nope. I've only pulled one link off." And then they would see the chain and be all like, "we are so sorry. The Ironman is far away in the future. Not three weeks away. Your hair is the wind beneath Bette Midler's wings."

And you guys. I be freaking out lately over this race. I don't know what the deal is. I am so much more nervous than I have ever been for an Ironman event. I shouldn't be. I've trained well. I should have confidence in that. But ya'll. I am so nervous. And I don't even say "y'all!"

I think probably a good portion of the extra nerves are coming from the fact that I recently started following the Ironman Boulder Facebook page because I thought it would be helpful and that it would give me a sense of community. Because that's what Oprah would tell me to do. And that's also what happened when I followed the Ironman Lake Tahoe page last year.

But there is a stark difference between those two Facebook pages. The Boulder Ironman people are CRAZY.

The Tahoe people are also crazy, but a different kind of crazy that I can understand. The Tahoe course is absurdly unpleasant and it's always negative 3,000 degrees on race day there because it basically takes place in outer space above the North Pole. So the people who do the Tahoe race tend to be the really gruff mountain man folks who train like Rocky did when he fought the Russian and most of them haven't bought new gear or checked their heart rates since before the Titanic sunk. I don't even think most of those people own a computer. So the Facebook page basically consisted of one freaked-out post per week from someone in my exact position, saying things like "is it really cold in Tahoe? Should I bring a sweater?" And then maybe one person would respond, "yes."

I could handle that level of Facebook interaction with the Tahoe Ironman community.

But oh my gosh. Something be wrong with Boulder Colorado.

I've heard that Boulder is like the triathlete Mecca of the world and that its entire population is basically just made up of independently wealthy full-time professional triathletes that haven't eaten food that you actually have to chew since elementary school. But I didn't think that was true until I started following this Facebook page.

I swear to you that eleventy people post on this page every day and 90% of what they post might as well be in another language. Someone will post something about VO2 Max (whatever the hell that is) or Swimskin (whatever the hell that is) or how you can't live unless you consume exactly a proratia of salt capsules every 20 miloquadseconds (WTF?) or that if you forgot to count your macros (WTAF?!?) on any given day in February 2001, you might as well have yourself put into a coma because you are worthless as a human being, etc.

And I read these things and I'm like, "WHAT THE HELL ARE THESE PEOPLE TALKING ABOUT!??!"

And then, since I don't know what anyone is talking about, I suddenly feel very sure that even though I have been getting up at ungodly hours and doing ungodly things for ungodly amounts of time for an ungodly number of months, I am completely and totally unprepared for this.

Not to mention, I swear to you that every single person competing in the Boulder Ironman seems to be training on the course every single day for time and all eternity. Because every day someone posts something like, "I was out riding the course today and saw all 1,100 of you also riding the course and making extremely specific race plans with complicated technology Eli has never heard of and the energy was palpable!"

You guys! People are saying the energy there is already PALPABLE!

I've never even been to Boulder! I won't even see the area until the day before the race! I am literally planning on working late on Thursday, waking up at 4:00 AM on Friday, and driving to Boulder to try to make it by the end of the registration window.

Other people who are going to Boulder from out of town are talking about how they are getting there ten days in advance and "is this enough time to acclimate and ride the course 13,000 times so I'm familiar with it?"

And other people post stuff about how they are driving to Boulder from Kansas or Florida or Croatia every other day so they can practice on the course.

WHERE DO THESE PEOPLE GET THE TIME?!?!? DID THEY MAKE A PAPER CHAIN?!?!

By the way, ALL of them use the Ironman logo or a picture of them winning another Ironman race as their Facebook profile picture. And then there's me, eating birthday cake with my bare hands. AND IT'S NOT EVEN MY BIRTHDAY.

I know the simple solution here is to stop following the Facebook page. But I just can't. Now that I know it exists, not following it would be more unsettling than following it.

Plus, even though these people stress me out, I'm kind of obsessed with them. They remind me of more dedicated and successful versions of myself. If I wasn't eating birthday cake with my bare hands. In July. Two months after my birthday. I think I have the same relationship with them that Cady Heron and Regina George had in Mean Girls. Except they are totally unaware of me.

Someone please come over and give me a full body massage.

Doctor: So I understand you have had some new episodes. Eli: It sounds so dramatic when you say it in that voice! Doctor: Well your heart started racing and you got light-headed and fainted. That's pretty dramatic. Eli: I'm sorry. Did you say something? 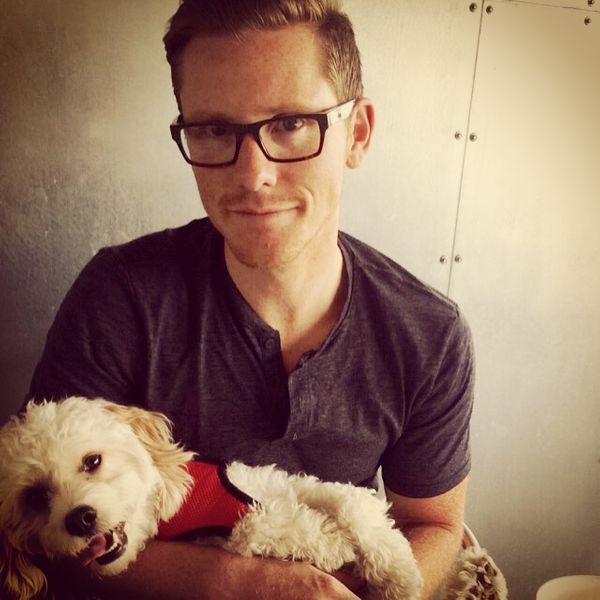 It was the best of times. It was the worst of times. Matthew Pants went to his home state of Mississippi (or, as he calls it, "Miss'ippi") to remodel his