On Friday Skylar told me he was going to some party at some woman's house and he asked if I wanted to come along. I wasn't really in the mood and I was tired and lazy and TV and stuff so I started to decline but then he promised me that he was only going to stay for 15 minutes and then he wanted to go to a movie after.

That sounded fine to me because popcorn.

So I agreed under the terms. Skylar told me this was a "PJ party." This sounded odd to me because (A) we are grownups, (B) what the hell is a "PJ party," (C) we are grownups. But I decided not to question it because another human told me I was about to get into a car, drive to a place with food, then go to another place with popcorn, and I could do all of this in sweats. And I've learned in my life that if something sounds too good to be true, it definitely is so just ride the high of belief in an impossible thing for as long as you can and postpone the devastation until later.

We showed up at the party, in sweats.

But not just sweats. I was wearing old black sweatpants and, for reasons that don't make any sense at all, an undersized itchy Mexican poncho that I bought in Tijuana in 2007 for $4.

We were the only people dressed this way. This is because this was not a "PJ party." This was a "Christmas sweater party." So everyone else was clad in slacks and sweaters, sipping on hot cider, and engaged in adult conversation.

When I pointed this out to Skylar, he whizzed through some run-on sentence about how sweaters basically are PJs and he knew this was the best way to get me out of the house and he wanted to wear sweats anyway so actually this was all a very well-crafted and brilliant plan.

The 15 minutes lasted 35, and then we were off to the movie. Some young adult angsty something or other movie that I had never heard of.

But I didn't care. Because popcorn. I wanted popcorn. I need you to understand how important popcorn was for me on Friday.

The movie started at 10:05, which is so late for a movie to start that I think it might actually be unconstitutional.

When we got to the Megaplex Skylar said he was going to run to the restroom and just meet me in the theater.

So I went to the concessions line and promptly purchased:

2. The largest bucket of popcorn available (but to be fair to me, when they asked if I wanted "extra butter" I responded, "YES. But don't go crazy." Because healthy)

3. The largest cup of Coke available, which was so big that I kept having to set it down on ledges to get a better grip during my 50-step walk to the ticket taker.

Because this was a movie theater, the above-listed items cost me $493.

But I didn't care. Because food.

And I was hungry.

I need you now to picture this situation. Do your very best. Shut your eyes for a minute if you need to. Do a google image search for "sad gross American" if you think it will help.

There I was, hobbling, across the floor toward the ticket-taker. I had my left arm wrapped around a giant barrel of extra-butter popcorn. My left hand was also magically holding onto the boxed pizza that was underneath the barrel. In my right hand, the jug of soda, held up to my chest to better keep it from slipping away.

I was wearing sweatpants and a Mexican poncho. My hair looked like, well, magic. My hair always looks like magic. But the rest of me? The rest of me was a disaster.

I shuffled my feet across the floor. Because the barrel of popcorn was up to my face, I would occasionally stick my tongue into it to catch a few of the kernels at the top.

And keep in mind, everyone, that it was 10:00 PM on a Friday night and I was seemingly alone.

It's not like I had a gaggle of friends around me making this situation look cute and lovably indulging, like a bunch of middle-aged women on a diet who say things like, "let's be bad!" right before ordering the slice of cheesecake to share after picking at their walnut salads.

I was alone. Hugging 12,000-calories of food against my sweatpantsed body, on a Friday night. And I couldn't even wait to get into the theater before partaking of the sustenance so I was already licking butter out of a bucket with my tongue.

That is when I turned a corner. One second after the ticket-taker took my ticket and loudly announced to an echoing auditorium of a lobby area which angsty young adult film I was there to see. One second after that. Right when I turned a corner. With those words still echoing throughout the building. With my tongue buried three inches into trans fats that NASA doesn't even know about yet.

Right then. When I turned that corner, I ran into a well-dressed couple, half of whom I formerly dated and have not seen in nearly two years.

You know how you imagine running into someone you dated once and you picture looking amazing, with a stunning new haircut and clothes out of a magazine, with an impossibly hot and remarkably accomplished significant other at your side and you politely nod to the old flame who failed realize how good you were back when they should have realized how good you were and you walk away riding that high for three weeks?

Well, this isn't one of those stories.

In the state described above, I ran into this couple.

And when I say "ran into," I actually mean "ran into."

My face bounced against the popcorn barrel.

I almost lost grip of the pizza AND the jug of carbonated sugar.

All three of us.

I looked at them.

They looked at me.

I looked at them.

I took turns looking at each of them.

Then I looked down at everything I was holding.

Then I looked back at them.

And then I said this:

"Welp! This is unfortunate!"

And then I shimmied around them, sucking up enough Coke through a bendy straw to put out the Great Chicago Fire as I walked.

It took one minute for me to figure out how to open the door just behind them to get into the theater that had only one person in it.

I had to reluctantly set one of my comically-large food items onto the ground to accomplish this. Then I propped the door with my foot, carefully lowered myself to pick the item back up off of the floor, like it was my baby and I was worried it was going to wake up, and entered the theater.

I shuffled up some stairs and down an aisle. Then Skylar made an observation as I fell into my seat.

Eli: But look! They had pizza!

AND THEN. You guys didn't think there was going to be an "and then." You thought that dumpster fire of a life I told you about over the weekend [https://www.itjustgetsstranger.com/2016/12/popcorn.html] was the finish line in my 32-year 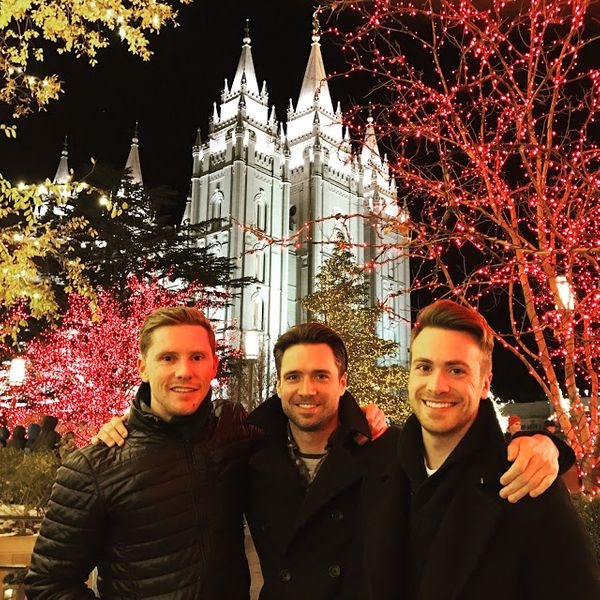 I'm going to choose this one time to say a word that I literally never say beause I feel like it's appropriate: y'all, I'm exhuasted. I PROMISE NEVER TO SAY