Several of us from various parts of the country descended upon San Francisco at various times on Thursday.  We had planned to spend a weekend hanging out in the city and heading up north to Napa Valley.

Disney Prince Hair Brandt lives in San Francisco now despite my repeated efforts to talk him into moving back to Salt Lake City so I can finally have some competition around here [runs a greasy comb through hair].

Look. I've never really spent time in San Francisco. I don't know much about it. I have no business being there.

BUT, what I do know is that Danny Tanner raised Olsen Twins in one of those houses and so there was absolutely no way I was going to leave the city without finding it.

I told Skylar this. He and I both had some free time on Friday morning while everyone else was working, and so we ventured off together to find the Full House house.

Skylar could not have been less interested in this activity, and I'm 120% convinced that he was intentionally singing the wrong words to the wrong song all morning just to irritate me. (He was singing "Our house--in the middle of the street" but he wasn't even getting those words right and then he would break into the "everywhere you look!" part of the Full House song but instead he would sing "everywhere you go, everything you do" and this was wrong and it was unacceptable and I needed him to just stop AND WE SHOULD JUST TOTALLY STAB CAESAR.)


We finally got to the house and that's when I decided that it was probably time for a "Waiting For Brunch" sequel, so I then spent the next 20 minutes being the most annoying tourist who has ever lived, performing various actions on the street with very specific instruction for Skylar to create the below video.

During the filming we were approached by a woman named Sonya who was visiting from New York and who initially pretended like she totally didn't care about this crap but she just wanted to get a picture of the house to show her kids later but the next thing she knew she was taking very specific directorial direction from Skylar and then getting dragged all over the entire city with us for the next two hours.

Also, the woman who appears on the phone in the video is our friend Beth who lives in the city and is probably embarrassed that we exist.

Don't worry. San Francisco payed us back for this.

On Sunday morning Skylar, our friend Charly, and I were having brunch with my friend Spencer who lives in the city, just before Skylar was supposed to take me and Charly to the airport (Skylar was staying in the area for work).

There we were, minding our business, being good people who aren't out to hurt anyone, when suddenly Charly got a call on her phone.

It was the police. Someone had broken into Skylar's rental car and the cops had found Charly's phone number on a bag in the back of the vehicle.

Someone broke into our car.

ON THE LORD'S DAY.

We were panicky, because of course we had left all of our possessions in this car, like the morons that we definitely are, and we didn't know what might have been taken.

Everything was in there because we were about to go to the airport, we had parked on a heavily foot-trafficked street in broad daylight in a not-so-bad part of town, and we were only going to be gone for like 45 minutes, so it just didn't seem like that big of a deal.

Oh how I wish I had listened to every lecture Bob and Cathie have ever given me in my life.

We arrived at the car a few minutes after the call and found a few police officers there. Several neighbors saw someone come by, shatter the back window, grab our three laptop bags (with all of our work laptops), jump into a vehicle, and speed away.

People tried to chase after him and someone called the cops, who arrived very quickly. A neighbor even got a picture of the car, but the license plate was blurry and nobody saw it in time to write it down.

Obviously losing that stuff was terrible. But things can be replaced, and none of had any security information that could be accessed by a thief.

Except that I, Eli Whistletown McCann, did the stupidest thing of all. I had backed up, obsessively, two years worth of Strangerville recordings on an external hard drive, which was sitting in that bag, which means all of the hundreds of hours of raw recordings are just plain gone, including several long interviews I have done with elderly family members just for personal family history purposes.

Fortunately all Strangerville episodes in their final form are backed up online (and have now been backed up on another hard drive), but I'm sick today about what can't be replaced.

We made all of the relevant phone calls, thanked all of the neighbors who stood around us for support, and thanked the cops who were really wonderful and did not even give us a lecture about "you people are idiots STOP MAKING CRIME EASY."

which immediately prompted me to call him and scream into the phone "OH MY GOSH YOU ARE SO NOT EQUIPPED TO DEAL WITH RISK PLEASE GO HOME AND LOCK SEVERAL DOORS."

He was relieved, later telling me that he wasn't actually "feeling the confidence" he was "exuding" so "powerfully."

So, yeah. San Francisco punished me for making a Full House tribute video WHICH I WAS JUST DOING TO CHEER UP MATT BECAUSE HE HAD A REALLY BAD WEEK LAST WEEK SO I FEEL LIKE KARMA BROKE A LITTLE.

At least I can leave you with something happy. We have a Strangerville episode for you below, including an insane story from Stranger Christy.

I'm not kidding you about this. I still cannot believe this bad date story is real.

Do us a solid and check it out below or on your podcast app.

This time in Strangerville, Eli confronts Meg about her offensive comments regarding their relationship and a woman tells the story of the worst date. Like, ever.

Story: "Pressure on the Barrel" by Christy (music by bensound.com) 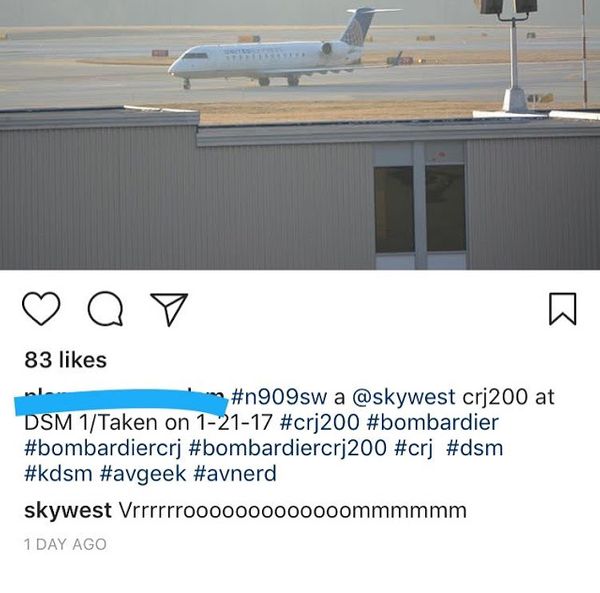 Not to get all Oprah on you, but my favorite thing in the entire world is that people think Skylar is SkyWest (the airline) on Instagram because his handle is

This time in Strangerville, Eli confronts Meg about her offensive comments regarding their relationship and a woman tells the story of the worst date. Like, ever. Story: “Pressure on the Barrel” by Christy (music by bensound.com) Production by Eli McCann and Meg Walter