A homeless woman got my attention as I was walking to my car. She was blonde and looked a little rough around the edges, but simultaneously kind. She pointed at the car parked in the middle of the street--something very fancy-shmancy, silver, and sleek--and she asked me if it was mine.

I told her it wasn't, but I was curious why she was asking because I was raised by Cathie Whittle McCann who taught me that you should always become involved in everything ever, especially if it is happening inside a grocery store.

This wasn't happening inside of a grocery store. It was happening just outside of Church & State, where our show will take place this Friday. (P.S. get tickets here.)

I had stopped by to meet with Blair, the director of the venue, so we could dig through an entire room full of audio equipment that is so intimidating that you all just became more inadequate for my mentioning it.

We did a few sound tests because, five shows later, I guess I have finally learned that it's not a bad idea to get these things worked out not five minutes before the show is supposed to start.

May my sweat-soaked suits rest in peace.

The sound-checking had gone well enough, and I was gleefully walking back to my car, parked on the side of the road, when the homeless woman got my attention.

She pointed at the car and said "well, there's a dog in there, and I'm not perfect or nothin', but I know that ain't right."

I walked over and confirmed that, indeed, there was a dog locked in this parked car in the middle of the street, right under the sun.

No, it wasn't 110 degrees out, but it was hot enough, and especially in a locked car.

The little dog was jumping back and forth across the seats, barking, and looking panicked.

The woman's anxiety was growing as she walked around the car, saying things like, "well maybe the person is coming right back" and "maybe they only planned to be gone for a minute" and "but they should know that you can't just leave a dog in a car in the sun."

I asked her if she had tried any doors to see if they were unlocked. She said that she didn't dare "because people like me get accused of all kinds of things when we're just trying to help."

That made me sad.

I offered to try the doors myself, but then I noticed that this car was so fancy that it didn't have handles. The handles recede into the door when you lock it. I guess we are living in The Jetsons now.

I must have looked frustrated enough by this point, because the homeless woman blurted out "DON'T BREAK THE WINDOWS!"

I assured her that I wouldn't and instead pulled out my phone to call 911, even though the last four times I have called 911, no officer showed up within two hours despite each call being time sensitive (looking at you, Salt Lake PD. Don't @ me.).

Not totally sure whether it was appropriate to call 911 about dogs being left in cars, I started the call with that exact question. The operator told me that they do respond to these reports and that 911 is the right number to call (FYI to my Strangers).

She took down all of the information and said they would have someone come by.

I passed this information on to the homeless woman, and told her that I would hang out and wait for the cop if she wanted to leave. She told me we were "in this together" and that there was "no way" she was going to "abandon that poor creature of God" at this point.

And I don't know. We were so unified in this that I sort of forgot that I didn't really know this lady and the next thing I knew we were sitting on a curb together, arm-in-arm, talking about how much we love puppies and how proud we were of ourselves for intervening.

It was very much not the way I expected my day to go when I poured myself a bowl of fiber cereal this morning.

Just behind us was a run-down apartment complex. So run-down, in fact, that until recently I thought the place was abandoned.

Blair, the Church & State director, told me that this complex has fostered a lot of crime on that street, mostly drug related, and it has caused major problems for the businesses in the area. She has been working, so far to no avail, to try to get the City to help do something about it.

As I sat on this curb with the homeless woman, she suddenly pointed back to the apartment complex and said, "a fancy car like that in front of this building? That, son, is a drug deal happening."

And all of a sudden it occurred to me that we might have actually been busting up a drug ring instead of just reporting animal abuse and I did not prepare myself emotionally for that kind of responsibility when I made the 911 call.

The cop showed up around then, a full eternity after we first saw the dog, so we decided we could probably leave.

The woman gave me a hug. It was like a top five hug from my life. This hug was so good that I was probably unfaithful to Skylar today. Good thing we have a mutual caught-in-the-passion-of-reporting-animal-abuse-with-women-on-the-street exception.

I climbed back into my car; she wandered up the road. I probably won't see her again. 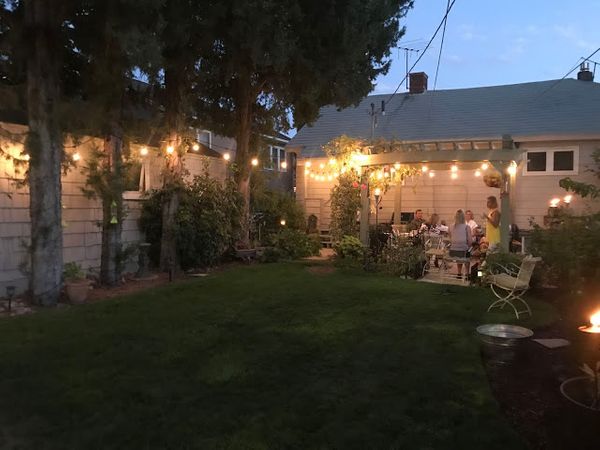 First of all, Strangerville Live is THIS FRIDAY. Come, please. We even ordered in some extra chairs so more people can attend and so we'll look really popular. But seating