A couple months ago I decided to knit a sweater. I had been avoiding this for a while because every time I looked at a sweater pattern it was like "Hello WOULD YOU LIKE TO DO A LOT OF MATHHHH" and that terrified me, so then I'd just make another scarf or hat.

Then I took on The Scarf That Must Not Be Named, and that thing was so complicated to complete that frankly I probably now have what it takes to solve COVID-19 by tomorrow (but I won't, because busy with TV). So I thought I could maybe take on a sweater.

I found a pattern and showed it to Skylar. It has different stitch counts based on obesity levels and when I measured Skylar he was so small that I actually had to manually alter the pattern because it didn't contemplate someone of his size.

Speaking of, I am growing into my chair during social distancing. It's been four weeks and having zero access to a gym in addition to not even walking around an office, things are getting scary here. We've tried to create a fitness center in our basement using some elastic bands Skylar bought on day one of quarantine but so far the only thing they've done is nearly kill us.

Last week I heard a loud crash and then desperate moaning coming from the basement and I rushed down there assuming it was affairs but instead it was just Skylar and a pull-up bar that he had wrapped elastic bands around and then somehow sling-shot into his abdomen. I nearly became a widow that day, which is unfortunate because his life insurance policy sucks and I'm not even sure if I'm listed as the beneficiary [makes a note to check on that].

Anyway, he's fine. He's more than fine, in fact. Because while you and I have gained the weight of a thousand Titanics, he marched into the living room on Thursday and announced "I've lost 10 pounds somehow" like he was a SlimFast Commercial. Don't worry. I told him to shut up. We have a very healthy relationship.

This morning I was trying to write and he wouldn't stop talking to me so finally I locked him out of the room I've turned into my quarantine office. A few minutes later I heard him standing on the other side of the door humbly singing "do you want to build a snowmaaaan?"

The point is, I decided to make that man who now weighs 41 pounds and apparently knows all of the lyrics to Frozen songs a sweater using a pattern meant for grown obese men.

It was very difficult because the pattern was like "make sleeves and then make a front and back and then sew them together and then audit the taxes of a Fortune 500 company and then place your first born on an altar during a full-moon on a Leap Day while drenched in the blood of an ox's enemy" and do you know how hard it is to find 19th century pioneer blood during a pandemic?

Anyway, I finished the sweater. Don't look too closely because then you might not want to praise me.

I made him pose in various places around the house and the above photo is the only one he said I was allowed to share because apparently he hated all of these:

So I promised not to post them because I respect his 41-pound body. Sorry not sorry my husband is so cute.

And now, please enjoy a story from Jolyn.

This time in Strangerville, Eli steals from children, Meg looks hot on Zoom, and Jolyn takes the Strangerville Live stage to explain why she’s hiding from her neighbors. 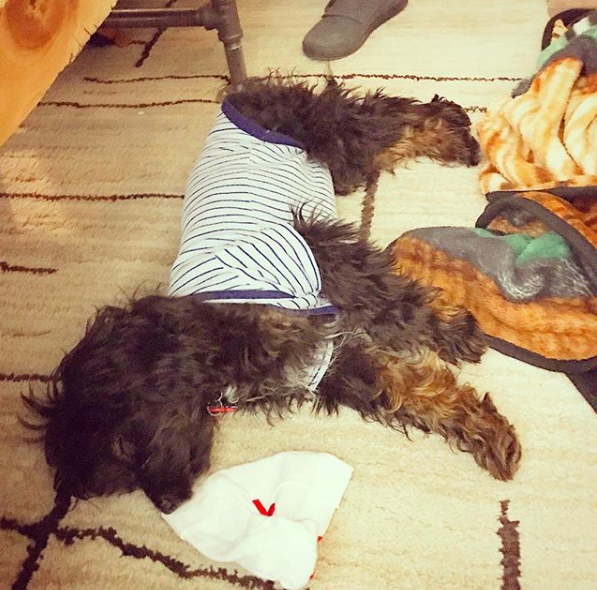 As you know since you are all experts on my life, I have gotten a Lagoon season pass every year since 2013. Why do I do this? I don't know.