My husband, who art in heaven, hallowed be his name, decided to become an absolute terrorist two nights ago.

Look. He's stressed and exhausted and exhausted and stressed and I am the June Cleaver to his Ronald Reagan or whoever the hell she was married to. I cook him meals. I cheerlead him out the door every morning. Well, not literally. He leaves at like negative eleventy o'clock every day and I'm for sure not getting out of bed for that. But figuratively I slap his butt in a "good game" kind of way as he heads off to the hospital or affairs or whatever it is he does all day.

I'm the most supportive spouse of all time. I'm so supportive they should name a bra after me. A good one. One of the ones from the commercials of women jumping in slow motion where they have the voiceover from Jennifer Aniston or whoever is in charge now soothingly saying "finally, a bra for women, made by women." One of those. They should name one of those after me considering how supportive I've been.

So now that I've educated y'all on how incredible I am, you are prepared to gasp and pearl-clutch when I tell you that Skylar what's-his-bottom INTERFERED WITH MY BEAUTY SLEEP two nights ago.

It all started when I announced that I was going to bed. I had just spent my evening doing some very hard knitting labor while watching trash tv and I was EXHAUSTED from these goodly pursuits while Skylar sat quietly for several hours "studying" on his "laptop" so he could learn to become a "doctor." I put some words in quotes so you would read them in a mocking voice because hopefully that will help pull you more to my side on all of this.

So I said, "time for bed . . ." and I even said the dot, dot, dots out loud so he would understand that I was communicating the obvious through verbal ellipses. The obvious, being that he should go to bed right then with me so I wouldn't be disturbed by his late arrival as I was already dozing off.

Well, my lawfully wedded whoever was like "I need to study," and I want you to read that quote in a whiney mocking voice because I still want you on my side here. And he said he was going to stay up for another hour or so and I was like "WELL DON'T MAKE ANY SOUNDS BECAUSE I NEED MY BEAUTY SLEEP" and that absolute monster just said "ok" instead of "WHAT ARE YOU TALKING ABOUT YOU ARE BEAUTIFUL WHETHER YOU GET SLEEP OR NOT."

I went to bed, which means lying on my back for one hour staring at twitter and occasionally replying to someone "LOL totally!" Finally I passed out.

I don't know how long I was asleep when I was suddenly jolted into consciousness in the twilight hours by the sounds of the absolute criminal who not two years ago made me pay for two black bow ties to wear at a wedding even though we already had two black bow ties that were apparently "not the right shade"—I was awakened by that man clankity-clankity-clank washing the loudest dishes that have ever dished in the history of dishing from inside our tiny kitchen not TWO ROOMS away from where I lay in solemn slumber.

I stormed to the scene of the crime and demanded in such a polite way for an explanation on "what the hell" he was "doing at one freaking thirty in the morning!" Well, he apologized and said he was stressed out and couldn't sleep and so he decided to clean, which like, yeah. I guess he could be doing worse things with his anxieties. But he could also be doing better things with them. Like cleaning quiet stuff.

Could he not find a duster? What happened to silent dusting?!

I stomped back to bed, like a person who is on the right side of history. And I slumbered once again.

No one warned me that sometimes marriage is impossible.

This time in Strangerville, there was an inauguration and it was peaceful, Meg and Eli discuss career crises, and Rebbie Brassfield shares her experience of feeling very unqualified to create an ad campaign for Pepsi. Story Selling Sex As A Virgin, by Rebbie Brassfield 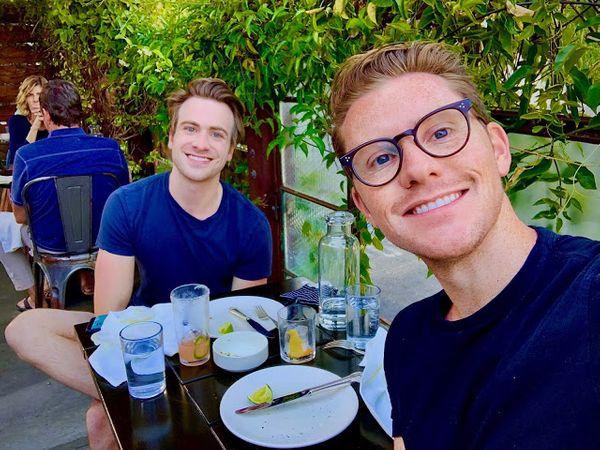 "Did you have company in here today?" Skylar was asking it sarcastically, and I knew that was the case, so I guess that's why I responded "just my handful of