"Did you have company in here today?" Skylar was asking it sarcastically, and I knew that was the case, so I guess that's why I responded "just my handful of potential suitors who won't attack me in the comfort of my own home office."

The inquisitive ambush was prompted by the five empty glasses strewn across the desk where I was was working. Skylar was already in the process of reaching around me to gather them up before I even finished playfully threatening infidelity and divorce.

I don't know how it happens, really. I don't remember bringing them all into the room throughout the day. I feel like I only use one glass, shepherding it back and forth between the kitchen and my little office to retrieve water when I'm thirsty or bored. And yet, somehow half the cast of Beauty & The Beast is huddled around me by the time Skylar wanders into the house that evening, demanding to know why I've decided to be so wasteful.

"Shall we go take a peek inside your car?" I sometimes challenge him whenever it seems like he needs a "he who is without sin among you/stone casting" lesson. Sure, maybe I gather and hoard dishes in corners of our home, but only Skylar brings them to his car.

It's the strangest habit, really. The kinds of household items he thinks are made for "on the go."

"Why?!" I yelled at him recently when he climbed into the driver's seat of his Subaru holding a glass filled to the very top with water and shifted into reverse?

"We have water bottles!"

"We have water bottles," my busboy husband muttered as he shuffled out of the office coddling my various dishes.

He uses the same arguments against me inside the house as I use against him in his vehicle. But this is really a false equivalence. It might not make sense to gather cups and things and move them into the car or office and fail to notice the problem until they've developed a critical mass. But at least I don't fill the same to the brim and then spill the sloshing liquid to and fro while navigating lane changes on the interstate.

He does this inside as well.

It was nice of him, or so I thought, until I saw the large ceramic mug full of water the temperature of Satan's armpit sweat somehow defying all the laws of physics by bowing out of the top of the cup without spilling.

"How am I supposed to carry that anywhere? A slight breeze right now would flood the kitchen!"

Skylar told me to just lean down and sip it until it was safe to transport. "That's what I do."

"No, Sky. That's not what you do. You leave it to cool and then forget about it until there's a full graveyard of forgotten teas spread throughout our home."

I'm convinced he's never actually tried tea and he wouldn't really like it if he did. He never seems to drink it. He just makes it and forgets about it.

"Oh shoot!" he'll yell when he comes across a thermos of a chamomile he had prepared nine hours earlier and then abandoned on the kitchen counter. "Oh well."

Then he pours it down the drain and places the dish in the dishwasher alongside two dozen glasses he had recently retrieved from the office.

This time in Strangerville, it’s our fifth birthday! Eli tries to convince a skeptical Meg that we are in for more peaceful times. And a woman deserves the Purple Heart for surviving what must be the worst dates that have ever happened.

Four Dating Rules, by The Suzzzz 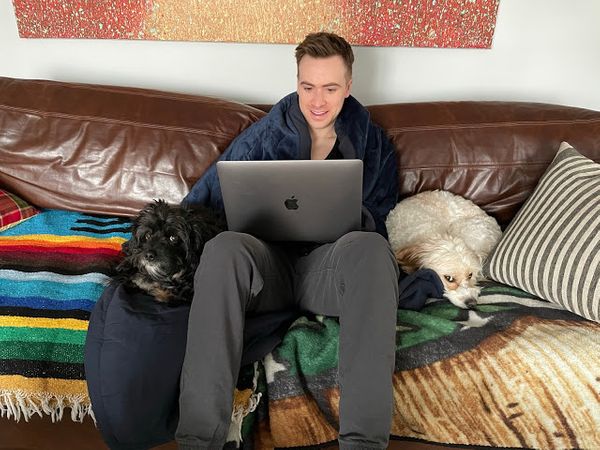 This time in Strangerville, it’s our fifth birthday! Eli tries to convince a skeptical Meg that we are in for more peaceful times. And a woman deserves the Purple Heart for surviving what must be the worst dates that have ever happened. Story